Last week Joe Posnanski created the Intentional Walk Rage Scale (IWRS). Here we put the IWRS to use and evaluate all of the intentional walks from the 2014 season.

The Intentional Walk. A decision from the manager to have his pitcher automatically put a batter on base rather than face any alternatives of the plate appearance. This strategy is used to avoid great hitters, to set up additional forceouts on the bases, or a preference for pitching to the on-deck hitter (e.g., to take advantage of platoon splits). While these strategies may sound reasonable, analysis from within the sabermetric community (i.e., The Book) has demonstrated the danger of the intentional walk. Without getting into the specifics of changes in run expectancy, the basic idea is that putting additional runners on base, and advancing runners around the bases increases the probability the opposition will score one or more runs.

Despite this, intentional walks are still ordered quite often by major league managers. Looking at the league frequencies for the last 20 years we see there have been over 1000 IBBs each season, with a peak in the early 2000s (*cough* Barry Bonds): 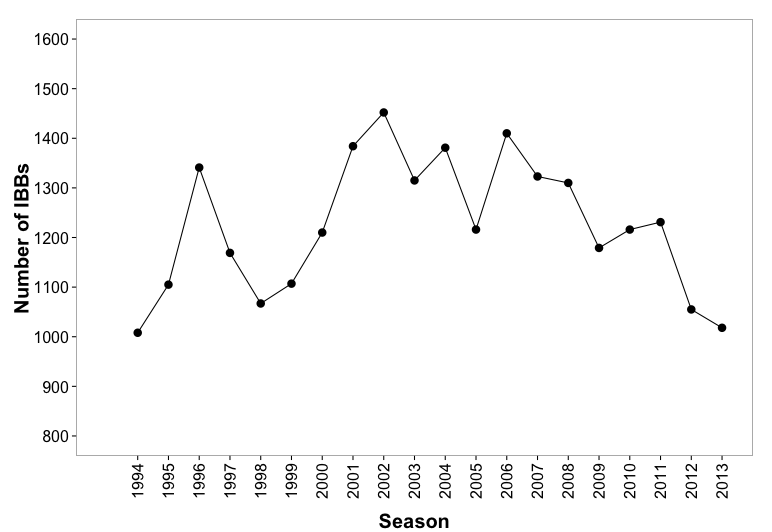 While it appears that there is a downward trend in the use of the IBB over the last few seasons, the strategy remains overused and can be maddening. So much so that last week Joe Posnanski created the Intentional Walk Rage Scale (IWRS). I think this system is great. Apparently, so did Ron Washington, as a mere few days after its creation he tried to ascend to the top of the IWRS leaderboard. While IWRS does not perfectly capture all the nuance of an IBB in a given situation, it provides a simple approach for identifying the really bad (or contrarily, reasonable) IBBs.

For those who have not read the original IWRS post, the IWRS involves taking an IBB and asking the following six questions and assigning the corresponding points:

The points are then summed to get the final amount of rage. The scale ranges from 0-25 with higher numbers indicative of more rage. It should be noted, as Posnanski did, that a critical feature of this scale is all of the questions can be posed before the IBB happens. This scale is not about second-guessing an IBB after observing the result. This is about first-guessing the process of issuing an IBB.

When he published the scale, Posnanski worked through an IBB ordered by Ned Yost that especially drew his ire. And then went through another example to evaluate Ron Washington's gem of a managerial decision. These examples made me curious about how other managers stack up on the IWRS. Who are the top IBB offenders? Who induces the most rage per IBB? Which were the worst IBBs? Which IBBs were excusable?

Using the Baseball-Reference play index event finder I collected all of the intentional walks for the 2014 season (through Monday's games). There have been 229 intentional walks issued this season. Managers have tended to issue the IBB when the game is tied (88) or their team is trailing (118). These points might be evidence of an underlying psychological aspect of issuing the IBB but I will leave that for now. The Pirates have issued the most IBBs (14) and the Tigers have issued the fewest (1). Despite his early season struggles Prince Fielder has been given the most free passes (10). Regardless of team, player or situation I took each of the 229 IBBs from this season and answered the six questions for the IWRS.

For clarity, here is how I answered and coded each of the questions listed above:

Without further adieu here are some basic descriptive statistics for these IWRS data:

And here are the IWRS data organized by manager:

Sorting the data by IWRS/IBB shows a few interesting things. First, our good friends Ned Yost and Ron Washington make the top 10. Second, Joe Maddon is near the bottom. And the managers of a couple of the more analytically inclined teams, like the Athletics and Indians, are issuing many IBBs (10) but they are typically not terrible.

Given these data we can begin to answer the questions posed above. The top IBB offenders (i.e., most IBB issued) are Hurdle, Mattingly, Collins, Francona, Melvin and Gibson. The most rage per IBB comes from Williams, Scioscia, Yost, Farrell and McClendon. Small sample caveats should be noted.

How about the IBBs that are the least rageworthy? Here they are:

Click on the date to be taken to the Baseball-Reference box score.

Mike Matheny is the proud manager of the only IBB this season that can be said to have caused no rage! Now, how about the most rageworthy? Here they are:

Click on the date to be taken to the Baseball-Reference box score.

We have yet to see the maximum rage inducing IBB this season. Lloyd McClendon was an inning late. I will try and keep this dataset up-to-date throughout the season to see if anyone can achieve such a moment.

In addition to tracking how terrible some of the IBBs are, there are many more things that could be examined with these data. For example, according to my coding 167 of the 229 IBBs this season (73%) were issued with the intent of gaining the platoon advantage (or forcing a substitution from the opposing manager). So there may be some method to the madness of these IBBs.

If you have any questions about the data or suggestions for looking into it further let me know in the comments below.

Finally, thanks to Joe Posnanski for developing this elegant scale.