Examining the Emergence of Jesse Chavez

A career journeyman, Jesse Chavez has made his mark with the Oakland Athletics early on in 2014. Just how has he done it?

Share All sharing options for: Examining the Emergence of Jesse Chavez

Coming into 2014, Jesse Chavez wasn't anything for the Oakland Athletics to be overly excited about. Long-term injuries to some of their key starters provided an opportunity for Chavez to grab a spot in the rotation, despite very little starting experience to date. In addition, Chavez hadn't exactly demonstrated success coming out of the bullpen with a variety of teams, which is why the A's were able to acquire him from the Toronto Blue Jays in August of 2012 for nothing more than cash considerations after he was DFA'd.

Yet, about a month and a half into this 2014 season, Oakland is right back at the top of the American League West, thanks in large part to the pitching of Jesse Chavez. The 30-year-old righty has established himself as an early Cy Young candidate, pitching right in the mix of an A's rotation that is among the best in the business. Why has this taken so long? What has Chavez done differently that has allowed him to be so successful?

Prior to joining Oakland at the tail end of the 2012 campaign, Chavez had spent time with four different organizations, failing to crack a big league bullpen full-time. Before taking the bump for 17 starts at the Triple-A level in the Blue Jays organization in 2012, Chavez only had a pair of starts to his credit in parts of five seasons. His experience at that point saw him surrender way too many fly balls, a startling amount of which made it over the outfield wall. After a disastrous stint with the Kansas City Royals in 2011, Chavez looked destined to be a career minor leaguer.

Billy Beane has a habit of grabbing those diamonds in the rough, though, and after the A's acquired Chavez, he pieced together a very solid 2013 season. He didn't make a start, but he struck out over eight hitters per nine, walked just a touch over three, and allowed just 0.47 HR/9, a key figure given his previous struggles. Injuries to starters A.J. Griffin and Jarrod Parker left Chavez with an opportunity to see increased time as a starter for Oakland this season, and he has absolutely taken advantage of it.

This is what Chavez's numbers look like to this point in the season:

Based off of what you see there, it isn't difficult to tell why Chavez has been successful. His walk rate is as low as it's ever been in his career, and he's not allowing many base runners in general. Not pictured is his ground ball rate, which is actually as high as it's been in his career, which has certainly been a factor in his success. Looking at the way he mixes and spots his pitches, it becomes even easier to tell why this season has represented a coming out party of sorts for Jesse Chavez. 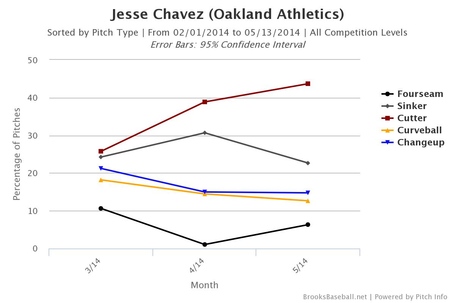 This is a general graph that represents all pitches. Obviously that cutter usage has gone up. It's in no way a coincidence that the last two seasons in which Chavez has experienced success with Oakland, he's also developed a cutter. Prior to 2013, he didn't have one in his arsenal. The pitch selection doesn't vary tremendously, overall, depending on the handedness of the hitter except in the case of the changeup. He throws his changeup almost twice as much against lefties and generates more swinging strikes against them with that pitch (22) than he has with all of his other pitches combined (21). That's indicated here: 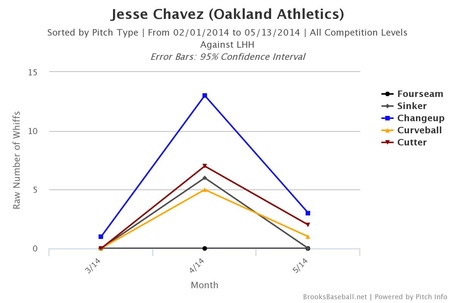 His work against righties paints a bit of a different picture. Rather than using the change against right-handers, Chavez goes back to that cutter. The cutter is his most used pitch overall and generates more swings and misses by right-handed hitters than any other pitch. During the month of April, it led to 17 swing-and-misses by right-handed hitters, by far his highest total with any pitch. Here's what that looks like: 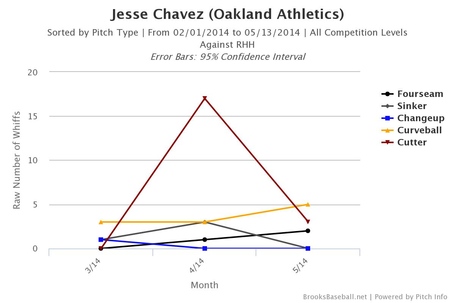 We're working with a relatively small sample size here, given that it's only May, but the results are pretty clear as to what has made Jesse Chavez so successful as a starter for the Oakland Athletics. He's mixing his pitches effectively against right and left-handed hitters and going to what makes him successful against each. The addition of a cutter to his repertoire has aided him significantly, and he's using it as his primary pitch overall. It's taken Chavez a long time to become successful in this game, but with his current approach on the hill, there's no reason to think that he couldn't keep this up for the remainder of the year and perhaps beyond.

Randy Holt is a contributor to Beyond The Box Score. You can follow him on Twitter @RandallPnkFloyd.