Strikeouts are up, so why hasn't the single game record fallen?

It's no secret that strikeouts are on the rise, but if that's the case, why haven't we seen more pitchers take a run at the single game record shared by Roger Clemens, Kerry Wood, and Randy Johnson?

Share All sharing options for: Strikeouts are up, so why hasn't the single game record fallen?

Strikeouts are up. Take a moment to gather yourself after learning such a surprising piece of information. Now that we have that settled, consider something else. Despite a huge increase in the strikeout rate across baseball, we haven't seen a starting pitcher challenge the nine inning strikeout record in any meaningful way. In 2004, Ben Sheets struck out 18 in one game. Anibal Sanchez, Brandon Morrow, and Johan Santana all have a 17 strikeout game under their belt since 2007. Cliff Lee, Ricky Nolasco, Jason Schmidt, and Jake Peavy (twice) have all thrown a 16 strikeout game since 2006. Strikeouts are up, but the single game strikeout record still stands. What's going on here?

*One note before we continue. Someone else had this idea and their suggestion led me to investigate the claim. Unfortunately, I don't remember where I saw the question and can't seem to find it anywhere, so please comment below if you know who deserves the attribution.

First, let's get a quick sense of where we stand by looking at the yearly strikeout rate and innings pitched per start. 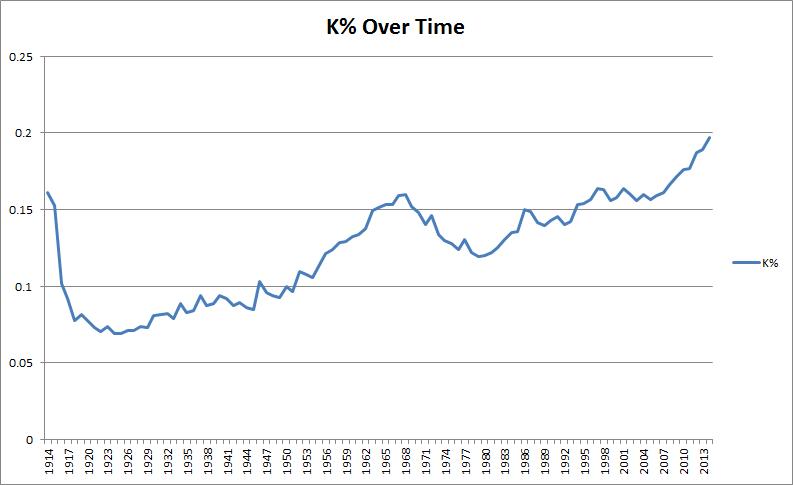 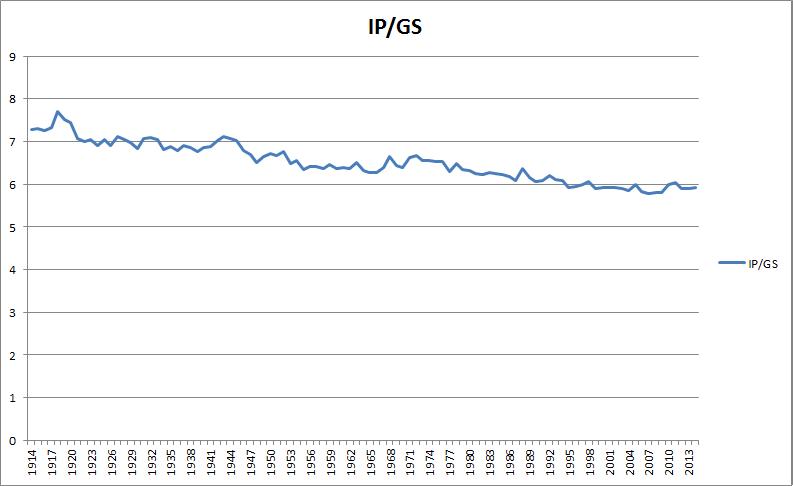 Now let's take a look at the rate of various strikeout games in each decade (for starters only in games of nine innings or fewer). What you're looking at is the percentage of games started per decade in which the starter had a given number of strikeouts. 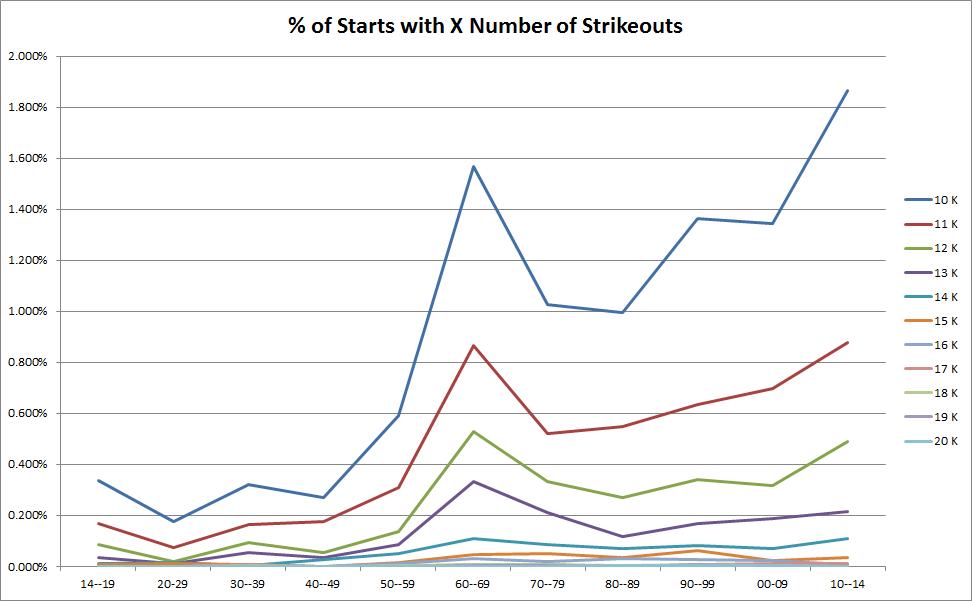 Here it is in table form with the raw numbers, if you want to grab it for your own use:

There's no question that we're seeing fewer and fewer innings from starters over time, which means the odds of getting a chance to strikeout 20 batters is diminishing. You need to pitch into the seventh inning and you need to do so without throwing so many pitches that you get pulled. If you have 15 strikeouts after six innings, you're probably getting pulled earlier than you would have in the 1980s unless you also have a no-hitter. That pitcher might have been able to grab 20 strikeouts, but their manager wouldn't let them throw 130 or 140 pitches to do so.

Strikeouts are up, but relievers are carrying the load

Strikeouts are certainly on the rise, so teams are striking out more in each game, but a lot of those strikeouts are happening later in games. There's been a huge spike in 10 strikeout games by starters in this decade, but the spikes for 11, 12, 13, etc. are much smaller because the starters are getting pulled in favor of relievers who come in and keep the strikeout train moving. This is true at the margins. You see more 12, 13, 14 strikeouts games that you used to, but it isn't true at the upper limit because starters still aren't setting relievers up to push us across the 21 strikeout threshold.

It was already such a rare occurrence

The two preceding factors are important, but it's also true that we've only had four 20 strikeout games (in nine innings) in all of baseball history. The odds of one happening have probably gone up in this high strikeout era, but moving the odds from .00001% to .00002% (rough estimates) still means we're probably not going to see the record fall. Even if batters strikeout 30% of the time, the odds of one pitcher recording 20 outs via the strikeout are very low. Add in the complications of shorter outings and you're probably not going to see one, period. More strikeouts makes a 21 strikeout game more likely, but it's simply not something that's likely to happen.

Maybe Darvish will take the mound against the Astros later this year and upset this balance, but Clemens, Wood, and Johnson set the record because they happened to pitch extremely well against teams that were poorly prepared to face them on the day in which the cosmos was perfectly aligned.

Strikeouts are up, but games of 15 or more strikeouts are simply too rare for the rates to be dramatically affected. We might see a 21 strikeout game during this era of high strikeouts, but we probably won't. For some, that's probably a relief. For those of us who love watching a pitcher take over a game, it's a disappointing reality.