What is a Tyson Ross?

Share All sharing options for: Tyson Ross being Tyson Ross

If you were a casual baseball fan, had no idea who Tyson Ross was, and looked him up on Wikipedia, this is what you would find: "Tyson William Ross (born April 22, 1987) is an American professional baseball pitcher for the San Diego Padres of Major League Baseball." By the sound of that, Tyson Ross is just another guy. Can't get any blander than that. Yet he's much more unique then the description gives him credit.

In limited sample sizes, numbers can add up in all sorts of ways. Case in point Tyson Ross. When looking at Tyson Ross' career to date, he's neither been great nor bad, but simply average. However, Tyson Ross has done something a little unique, at least by my measurements. If we look at a few of his Minor League totals versus his Major League totals there's a lot of similarity.

Albeit I'm nitpicking rudimentary stats, nonetheless after 300+ innings, chances are most of the static has stabilized. Anyway, from this, we see Ross hasn't actually changed a great deal and been more or less what the Padres have come to expect when he was called up. But that in itself isn't exciting, the bigger question that remains is whether he will continue to be "just a guy" or better himself to be more?

To investigate let's first take a look at his repertoire.

From this we can see Ross is basically a two pitch pitcher, with the slider being his bread and butter pitch. While the slider has been roughed a bit more this year, (mostly due to a .375 BABIP against it) it's not likely to continue as it's still generating a lot of swings and misses. Via Brooks Baseball Pitch IQ Scores, his slider is generating whiffs per swing at 27% above league average, in other words has a 127 score. If we turn our attention to Baseball Prospectus leaderboards , we can see that this isn't a fluke either. His slider last year generated a 50.18 whiff per swing percentage, which was only behind Patrick Corbin's. This year that percentage has dropped to 45.75%, however that is still high and slots him at 5th in all of baseball.

Next let's take a look at his zone profile. For the intents and purposes of staying relevant, I'm only going to be using the zone profile data since he earned/kept his place in the rotation 7-23-13. 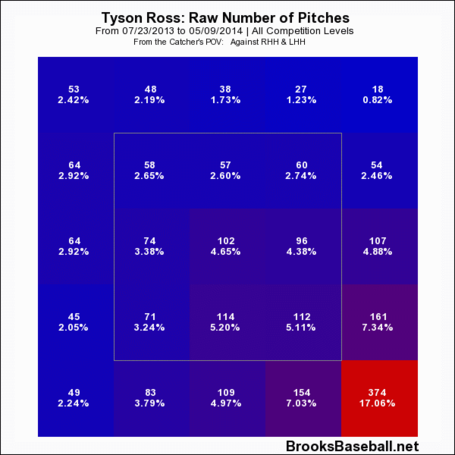 Upon first glance, I thought there was a mistake, but alas there is not. It's pretty remarkable he uses 1/4th (and even that might be too generous) of the zone to attack hitters on a consistent basis. By maintaining the ball low in the zone, he's been able to induce ground ball rates over 50% and this year a career high mark of 58.2%. In the long run, being this predictable in the zone could become an exploitation for hitters. However in the meantime, if it isn't broke don't fix it.

Yet, if there is one thing I believe could propel Ross to taking the next step, it's development and more reliance on his changeup. It's no secret the more good pitches a pitcher is capable of throwing the more unpredictable and deadly he can be, case in point Yu Darvish. As for Ross, despite limiting himself to a fastball-slider repertoire, his changeup has actually shown capability of being a good pitch. Again looking at Pitch IQ scores, his whiffs/swing rating on his changeup is at 130 and since 7-23-13 rated at 124. Like his slider this year, his changeup also has been prone to some tough luck as hitters have had a .500 BABIP, and .429 since last year, against it. Because he throws the changeup so infrequently, there's little conclusive evidence to go off, therefore it's difficult to say with certainty if throwing the changeup more will help him.

This is no reason not to try, though, as we've seen in the case of Ervin Santana whom has recently adopted a more changeup heavy approach, having a similar repertoire to Ross' prior to this year, and has seen there are rewards to be gained. Santana worked on improving his changeup, which was one of the major selling points his agent was emphasizing to teams this past winter. So far it's working for him as he's throwing the pitch 10% more than his career rate and getting good results doing so.

All this is a long winded way to say Ross is good right now. If Ross kept his current recipe he'd likely be able to maintain his success and be a reliable number three to four starter for some years to come. Yet, Ross has shown enough in other areas to warrant belief for improvement. If that's the case, selling him as a middle rotation starter would be an understatement. While ace is too much of a stretch, a solid number two or even a little above that could be possible. Or maybe Tyson Ross is just a guy.