Offense-first catchers are a valuable rarity, but how many of them can also frame pitches? We're taking a look at the top five hitters behind the dish from 2013.

Catcher framing statistics -- real, measurable ways to quantify how many extra strikes a sure-handed backstop can earn his pitcher -- are finally easily attainable thanks to the magic of PITCHf/x. While Brooks Baseball was already an indispensable resource, the addition of catcher framing stats* has cost me hours and hours of my life. Dan, Harry, and Dan are the best.

So while I'm interested in the tops and the bottoms of the catcher framing leaderboards -- the guys who are both best and worst at framing -- I wanted to take a quick look at the framing stats for the position's heaviest hitters.

To find the league's top offensive catchers from 2013, I pulled the wRC+ for all catchers with more than 400 plate appearances in 2013, and took a quick look at their PITCHf/x framing stats.

The charts below for each player come from Brooks Baseball, and indicate how many runs the player in question would have added over 7000 framing opportunities, which is something close to a full season behind the plate. It's a regressed, probabilistic model, and not indicative of what actually happened ... the actual numbers are a bit more extreme, even than these. Keep in mind that between nine and ten runs equals about a full win of value. 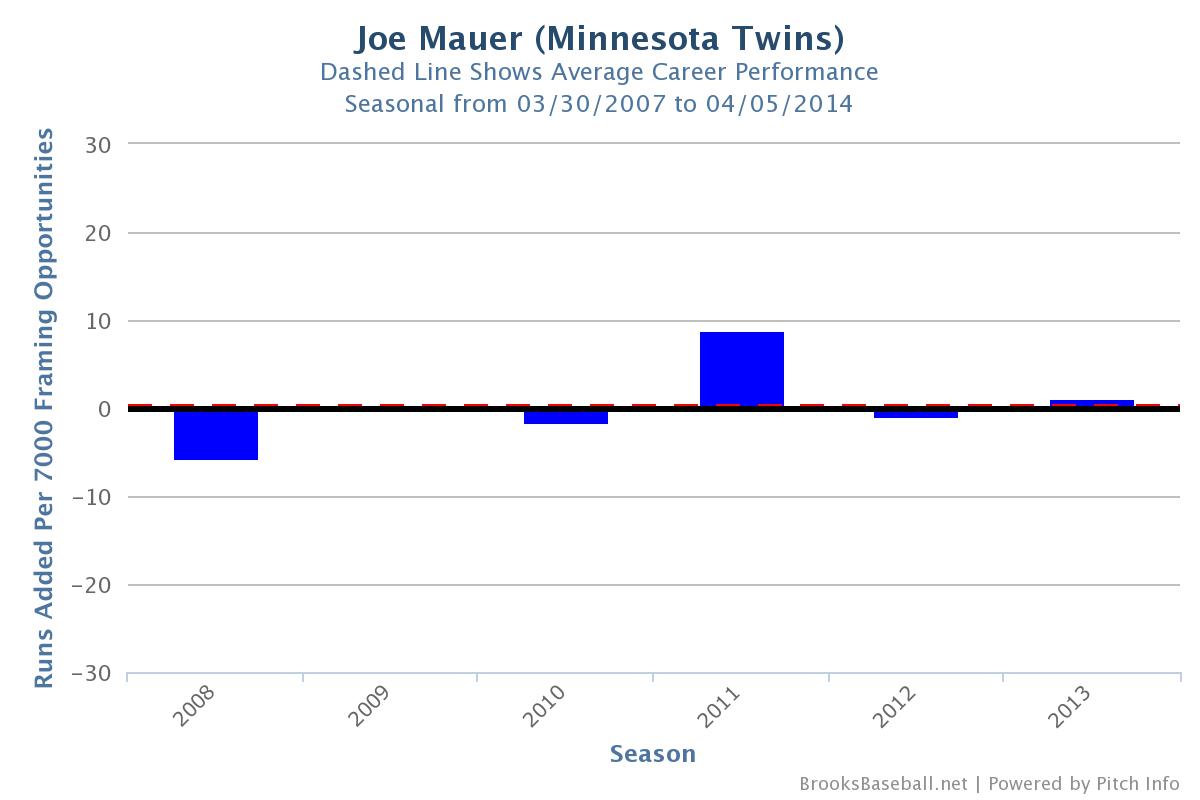 The gold standard for offensive catchers prior to his 2014 conversion to first base, Mauer has a reputation as a very solid defensive catcher. That's part of the reason why I thought his move to first base is a big negative for the Twins. But as a framer, Mauer isn't terribly impressive. The PITCHf/x framing stats for Mauer show us a catcher who doesn't do much extra for his pitchers, save a solid performance in 2011. During that season, his true talent level came out to about 3.5 runs on the positive, despite only putting in a little over 400 innings behind the dish. Sure that might have been more had Mauer played more innings, but it also could have been a sample size blip, and more innings might have shifted the calculation one way or the other.

So whatever Mauer might cost his team in terms of blocking, handling the staff, holding baserunners, and -- most importantly -- providing impact offense at catcher, the Twins may not be losing anything in terms of framing.*

* -- Unless of course they replace Mauer with a terrible framing catcher like, say, Kurt Suzuki. Whoops.

I did wonder if this might be an artifact of his team -- the Twins have recently had a low-strikeout rotation that sucks hard doesn't get a lot of strikes overall. So I also took a look at a few other Twins catchers over the past few years (after all, with Mauer's injuries and positional movement, they've had a number of opportunities). Ryan Doumit put in 866 or so innings for the Twins over the last two seasons, and he's the poster boy for bad framing. Drew Butera, who's ostensibly a defense-first backup catcher, was also pretty terrible on a rate basis over 1300+ innings with the Twins from 2010 to 2013. 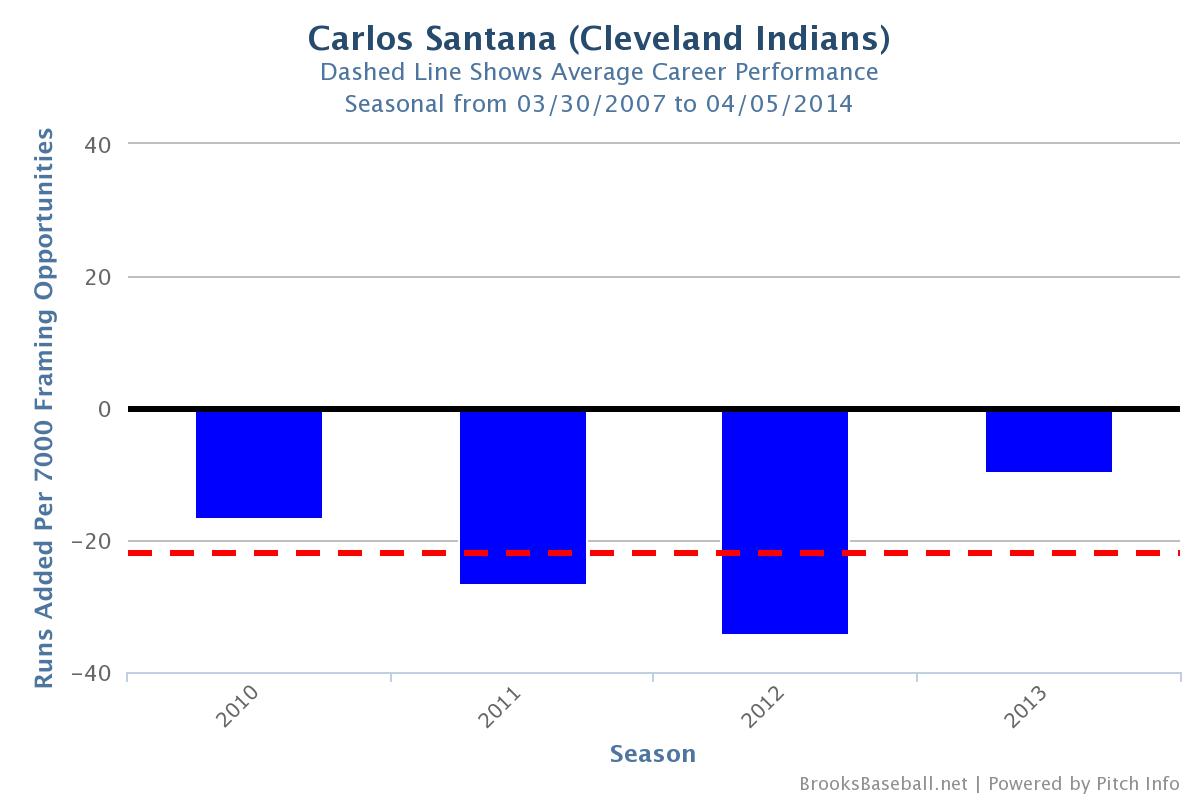 Cool. Another catcher being moved off the position (mostly) for 2014. Unlike Mauer, however, this seems to be a less painful proposition for Cleveland. Whereas Joe Mauer was relatively neutral in framing terms, Carlos Santana is (was?) a legitimately terrible framer, based on the data available.

In fact, in 2012, it appears that Santana's framing ability measured out to -29.5 framing runs, which is like taking approximately three wins off of his value. This is, in a word, bad. In fact, if you were to use his fWAR (3.3 in 2012) as a base, factoring in framing makes him look like something of a replacement-level player during that 2012 season. Carlos Santana. Replacement-level. I know, crazy.

So the Indians have appeared to move Santana off the position he played poorly (although less bad in 2013), put him in a position that doesn't sap his value quite as much as a move to 1B would have, and replaced him with a pretty cool framing catcher. BONUS GRAPH! 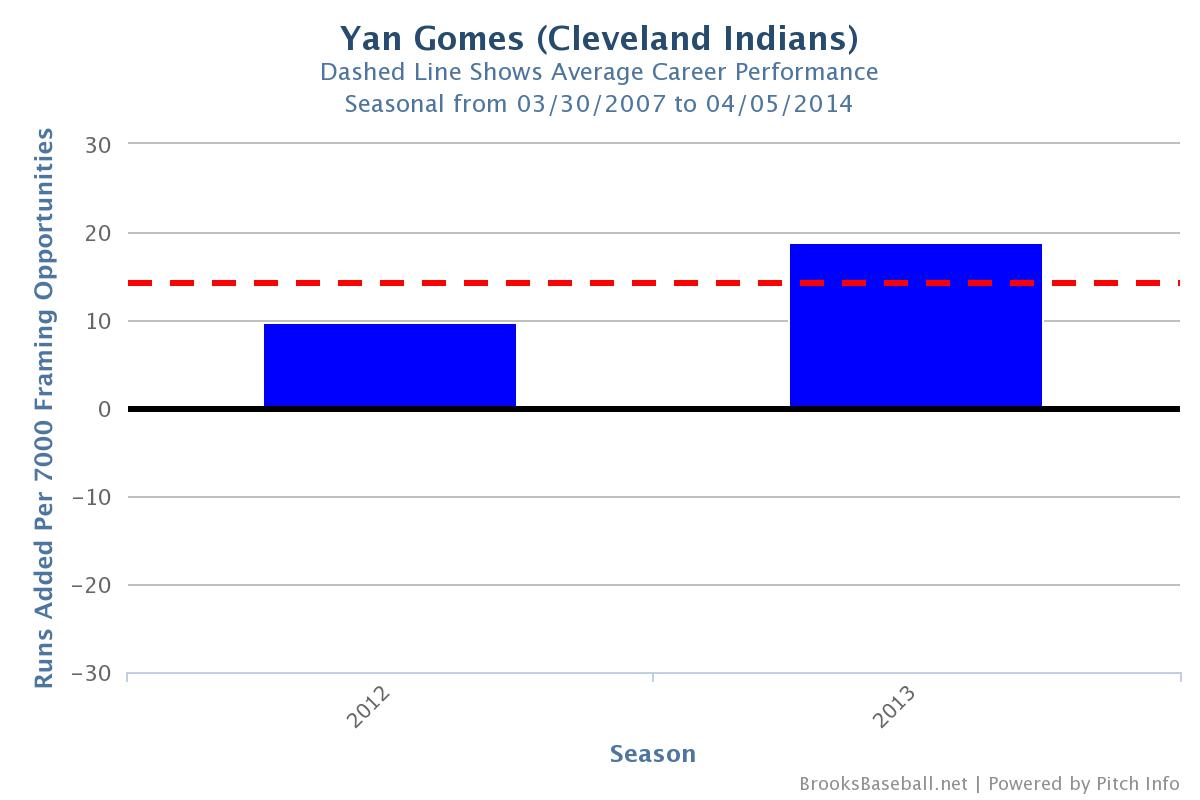 Yan Gomes is currently doing a 13-month performance art piece where he pretends to be Brian McCann. He's hitting like crazy (yes, he already has two homers on the year), while also providing plus framing ability in the limited time he's been behind the plate. In 710 innings last season, Gomes posted very good framing numbers, approximately worth 12.5 runs as a framer.

I'm not sure that Cleveland planned on this kind of production from Gomes when the team acquired him from Toronto, but they'll certainly take it. If we do this again next year, Gomes might be one of the top-5 hitting catchers in the bigs. 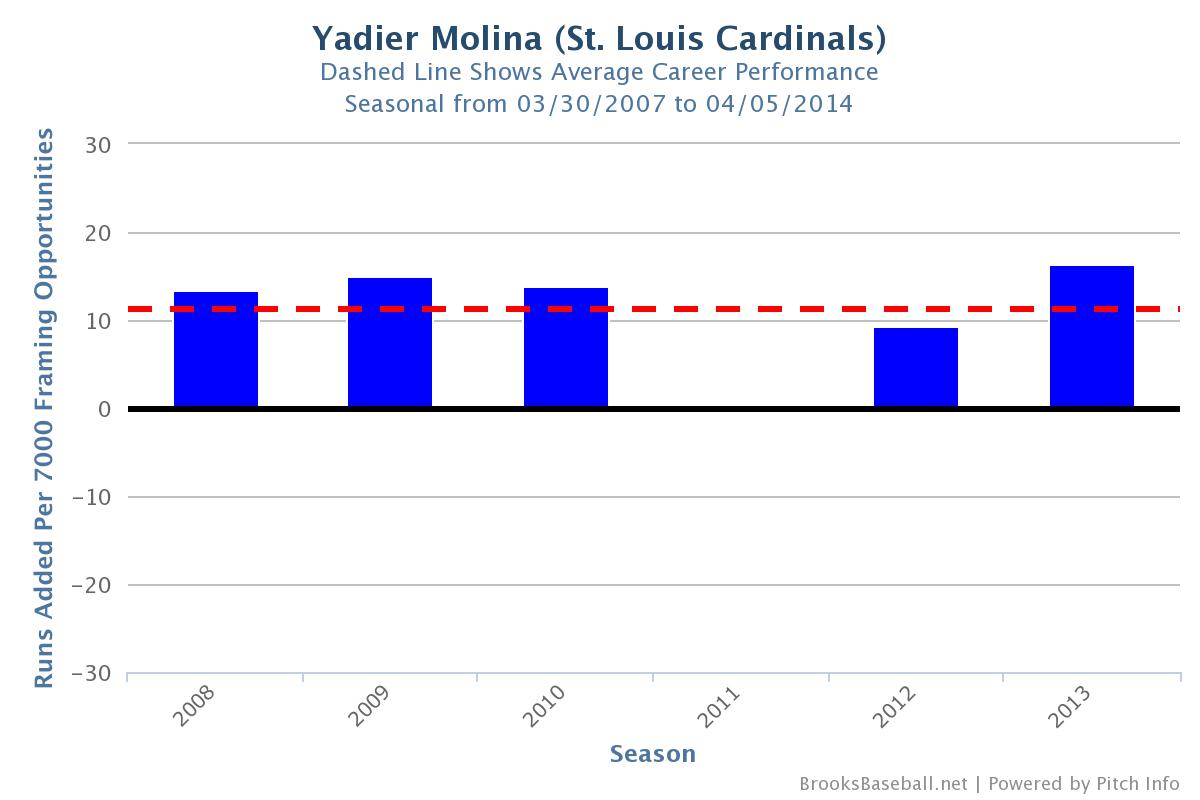 All hail the mighty king of defensive catchers. Molina's reputation is more on the non-framing side of run prevention: his reputation for blocking, controlling the running game, and running a game is what gets him the big bucks an under-market contract that makes the Cardinals look like geniuses (again).

But when it comes to framing, Molina is no slouch. He was likely worth about 15 runs in 2013, which is fairly close to his career average number of runs saved through extra strikes per year. He's also remarkably consistent, with only 2011 sitting as a major outlier -- and even that season was "only" average.

So yeah, if someone (perhaps Sal Perez or Austin Hedges or the next guy on the list) wants to take the crown of the best overall catcher in baseball -- they better bring Kryptonite. 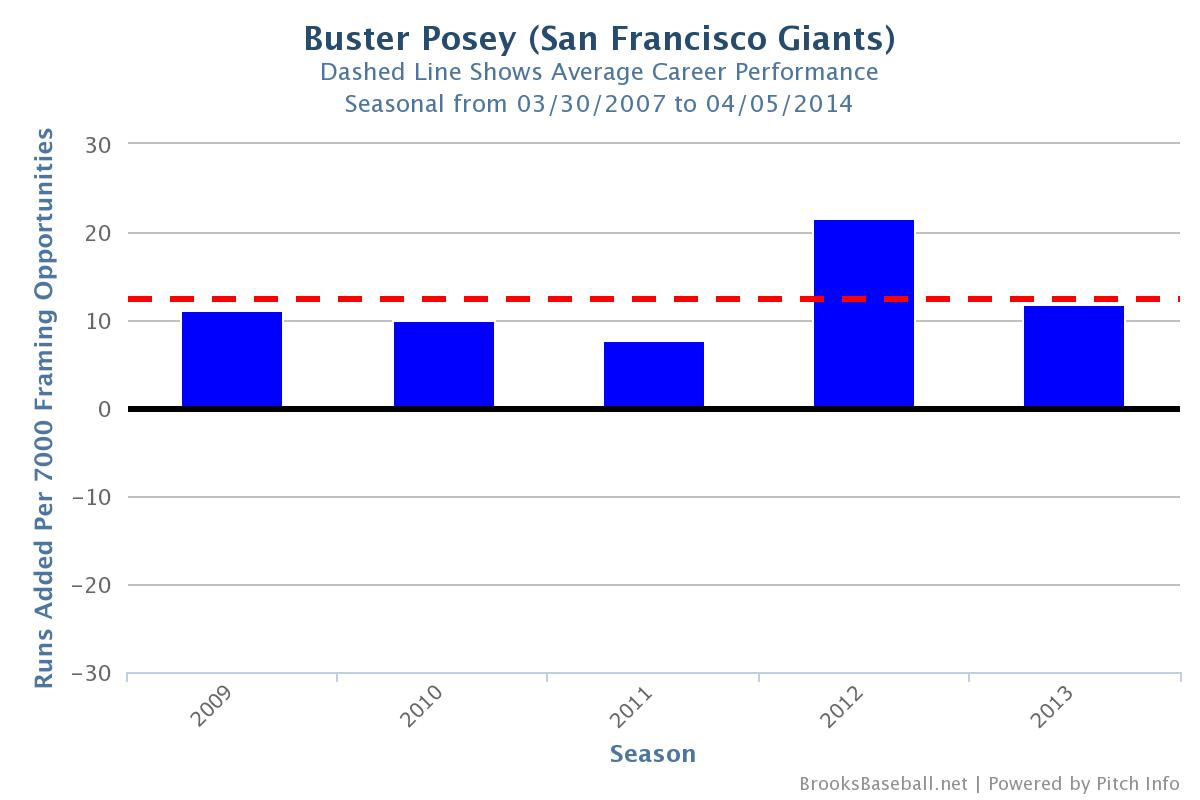 I will always have a soft spot for Buster -- I watched him play more than a few times at my alma mater -- but there's no need for any special homer appreciation here. While he didn't frame quite as well as he did during his stellar 2012 campaign, Buster brings both skill and consistency to his work behind the dish.

He's been a net positive in all of his seasons, and he's provided 10 or more runs of surplus value in each of his best two framing seasons -- the two most recent years. Among our high-caliber offensive catchers, Posey and Molina are able to show that good framing and defense can still be part of the overall package. 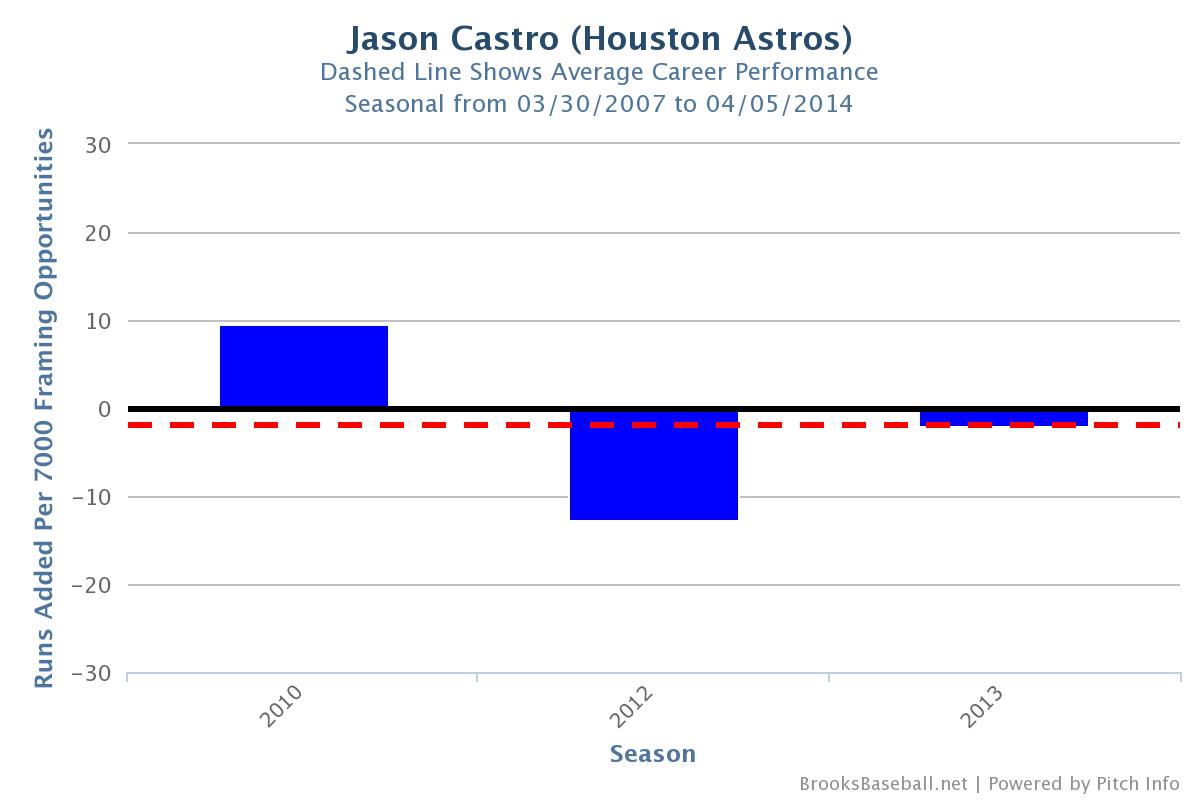 In his three years in the big leagues, Jason Castro has put in a little less than 2000 innings behind the plate. During his first season, 2010, Castro played his fewest innings in the field, but his value was about 33 extra strikes worth approximately 4.75 runs. Since then, Castro was a relatively poor framer in 2012, and a neutral (but slightly poor) framer in 2013.

The question is this: is Castro a good framer, a bad framer, or a neutral framer? Truthfully, we probably don't know for sure yet. 2000 innings seems like a lot, but it's not the world. But in Ben Lindbergh's catcher framing piece from last year at Grantland, it sounds as if Castro doesn't have much of a reputation for framing -- either from a stats or a scouting perspective. Then again, the Astros may be developing Castro's skills as a framer, causing him to improve from 2012 to 2013.

It may be a common refrain, but we probably need more data -- especially considering the possibility that Castro's "true talent level" for framing may be changing as the Astros make framing an organizational priority. But for now, the newly-minted All-Star is "just" an average framer, maybe slightly worse.

That may be a bummer for Astros fans, but hey, at least he's no Carlos Santana. And at least he can hit.

All statistics courtesy of Brooks Baseball and FanGraphs. H/T to Mitchel Lichtman of MGL on Baseball.

Bryan Grosnick is the Managing Editor of Beyond the Box Score and a writer for SB Nation MLB. You can follow him on Twitter at @bgrosnick.