Jose Abreu has had a very strong start to his rookie season posting a 152 wRC+ through his first 26 games as a pro. Part of the reason for Abreu's success is his approach at the plate, something that we can analyze in earnest with some of the data available from Brooks Baseball's PITCHf/x database.

Anthony Joshi-Pawlowic wasted no time in analyzing the hot start of White Sox slugger Jose Abreu. Surely he would cool down many thought, but that hasn't happened yet. In fact, Abreu's wRC+ has gone up since as he's only improved as time has gone on. No doubt he'll cool off eventually, but he continues to hit the ball hard which is always a good way to succeed in Major League Baseball. Abreu routinely makes the lists of batters with the most hard hits balls, which Mark Simon of ESPN crafts on a frequent basis. As Anthony pointed out, Abreu is an impressive hitter. He's even been compared to one of the best right handed hitters of all time in Albert Pujols:

The other day ESPN analyst, Eduardo Perez, compared Abreu to Albert Pujolsback in his heyday. If Abreu continues to maintain this level of production, it might not be that much a stretch to compare the two, at least for the time being.

Unless Abreu slows down he's a lock to battle Tanaka and any other challengers for the AL Rookie of the Year award. Alex Skillin recently broke down the early AL Rookie of the Year race, and listed Abreu as a top contender as his combination of ridiculous power and solid on-base skills will be incredibly valuable to the White Sox this season.

So how does Abreu's approach help him succeed? We don't have a ton of data (only 466 pitches seen so far) but there appear to be some insights to be had. Per Brooks Baseball, Abreu has shown a solid batting eye against fastballs and offspeed pitches. Breaking balls have been more of a struggle for him though, as he's taken more pitches in the zone and swung at many outside of the zone.

In the chart above you can see that Abreu swings at a very high percentage of fastballs (269 total seen) and change ups (71 seen) in the zone. He's managed to lay off of fastballs outside the zone, but the same can't be said for breaking balls and offspeed pitches. Those high swing rates, especially at fastballs and offspeed pitches that are strikes are why Brooks considers Abreu to have an exceptionally aggressive approach against those pitches. Brooks considers him to have a steady approach against breaking balls, largely a function of his low (comparatively) swing rate against in zone breaking balls. 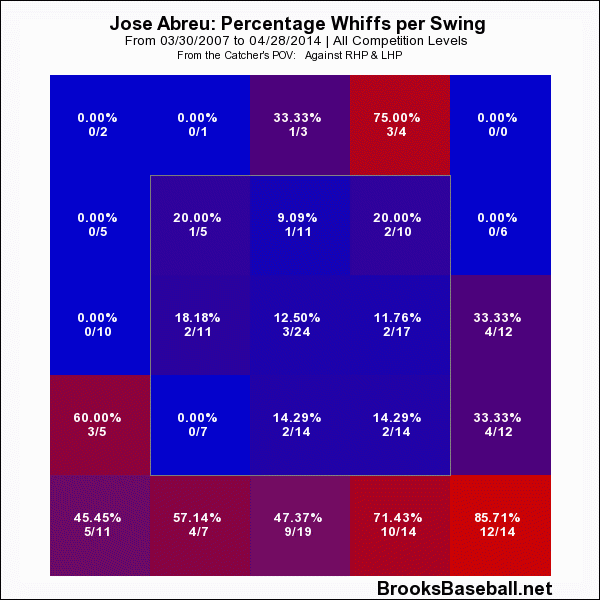 It would stand to reason that therein lies an opportunity for opposing pitchers to exploit Abreu's supposed weakness. 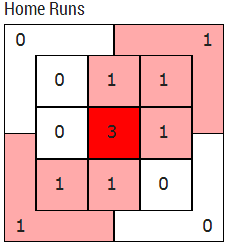 Daren Willman's site Baseball Savant provides similar heatmaps for Abreu and all of the outcomes of any given at bat this season. To the right is an image showing the pitch locations of all the home runs Abreu has hit this season. As you can see, Abreu has hit pitches all over the strikezone, including (down in the zone) out for homers.

The scary thing is that Abreu has a .246 BABIP so far this season. If he keeps hitting balls hard some of his offensive stats will inevitably rise as hard hit balls typically have a batting average of over .700 per Mark Simon.

One final interesting note is how pitchers are approaching Abreu, and how that coincides with his approach. Left handed pitchers are using fastballs when ahead of Abreu, but their pitch selection changes dramatically after two strikes. Righties approach Abreu fairly consistently, but rarely throw offspeed stuff on the first pitch of an at bat. Below is a full breakdown of pitches seen by Abreu by count and pitch type (Hard pitches or fastballs, breaking balls, and offspeed pitches). 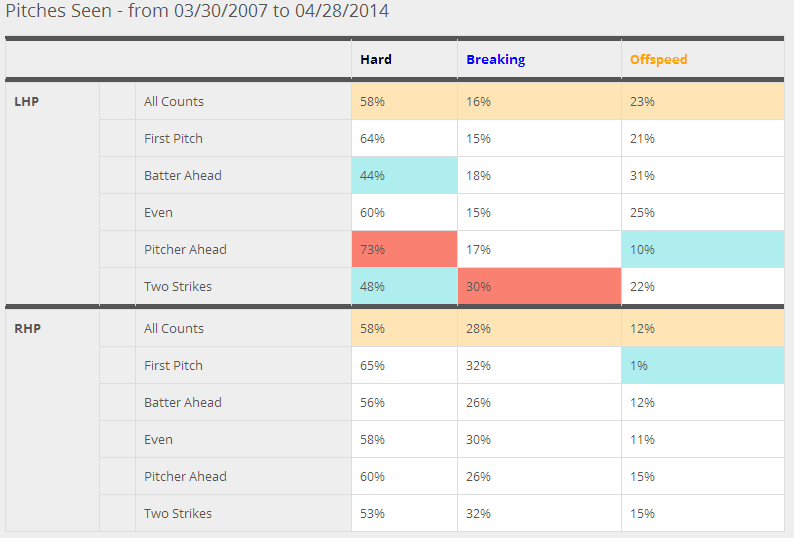 Interestingly, those hard pitches are the ones Abreu has done the most damage against. His .302 batting average and .667 slugging percentage against fastballs is by far his best performance against any pitch type. Meanwhile his performance against offspeed pitches has been poor thus far (.100 BA, .300 SLG). is at odds with his aggressive approach against those pitches.

My assumption is that Abreu is swinging at offspeed pitches because he's looking for fastballs to hit. It would seem that this might be the one area that Abreu will need to improve, as pitchers have been able to take advantage of his inability to hit offspeed pitches thus far. Only time will tell if Abreu is able to adjust.

Jose Abreu has been a tremendous addiiton for the Chicago White Sox so far. He's punished pitching all over the strikezone, and shown an ability to drive balls to all fields. The only question is whether or not he can continue to put up such impressive offensive numbers. One thing he does have going for him at this point is that he's shown tremendous patience at the plate despite an aggressive approach on pitches in the zone. It seems that this formula will continue to help Abreu, a strong on base machine with serious power, as he adjusts to Major League Baseball.