Masahiro Tanaka Through the Lens of Similarity Scores

With Masahiro Tanaka's much-heralded start, many tried to find his best comparison as a pitcher. Who is Tanaka's most comparable according to Pitcher Similarity Scores?

Share All sharing options for: Masahiro Tanaka Through the Lens of Similarity Scores

Earlier last week, I got a notification on Twitter from Bryan Grosnick, the managing editor here at Beyond the Box Score. The notification dealt with the following question from Craig Glaser...

Have heard a few comments about similarity... would be interested to see if an algorithm would identify Tanaka/Kuroda as similar pitchers

The reason why Bryan notified me was that one year ago, I created my version of Pitcher Similarity Scores, and then revised them last November. So with the algorithm in place, and a question answerable with the algorithm, let's see what happens.

First of all, it's important to note the obvious concern about making a Masahiro Tanaka comparison so soon: sample size. As of this writing, Tanaka has started two games and thrown 198 pitches, hardly a large body of work. I've stated before that I'd like to have a minimum of 1,000 pitches before beginning comparisons (roughly equivalent to 10 starts or an entire relief season), but we are still able to make some way too early Tanaka comparisons.

Ben Sheets was awesome. Let's use standard deviations to see how awesome.

As a start, let's talk a little about Tanaka per Brooks Baseball. He relies on four pitches: a fourseam fastball (21.21% usage), a sinker (26.77%), his much-acclaimed splitter (22.73%), and a slider (19.70%). The splitter gets a lot of attention, generating 53.3% whiffs/swing, and 77.8% GB/BIP. His slider can also be an effective out pitch, however. Against righties, the slider gets 52.9% whiffs/swing and has generated 7 Ks in his first two starts. Combining that with a fastball that averages over 93 MPH with over 10" vertical movement and a sinker at 92 MPH with over 8" horizontal movement and you have an impressive arsenal.

But let's look at Tanaka, starting initially pitch-by-pitch, and then moving on to the overall comparison. Starting with...

While the splitter and slider get the strikeouts, and the fastball shows the power, the sinker is Tanaka's most prevalent pitch. Nearly as fast as the fourseam (A shade under 92 MPH on average), his sinker shows more horizontal than vertical movement (-8.20" vs. 5.48").

The least-acclaimed weapon of Tanaka's main arsenal, the slider has some ability in its own right, especially against righties. The velocity (84.9 MPH) ranks in the top 50, while the movement comes in just outside the top 50 in both vertical and horizontal (1.50" and 2.56").

Might as well save the best for last. Tanaka has thrown the fifth-most splitters on the year, and among the 13 pitchers who have thrown at least 20 splitters, here's Tanaka's ranks: Velocity, first (87.6 MPH). Whiffs/swing, second (53.3% behind Danny Salazar's 57.9%). GB/BIP, tied second with Jake Odorizzi (78%, behind Brandon Morrow).

Of course, we can compare pitch-by-pitch, but people are equally interested in how Tanaka compares overall to pitchers. Once you take into account usage, pitch sequence, and all the previously mentioned components, we get the following histogram of similarity scores. 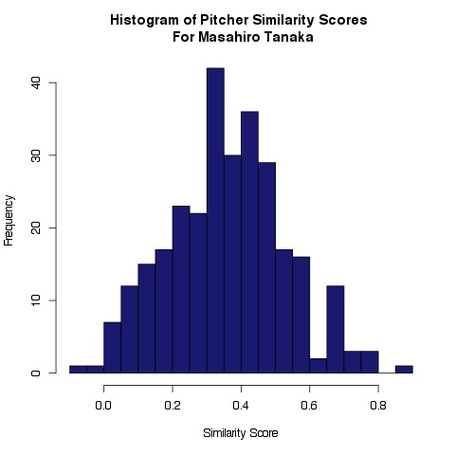 The scores range all over, with R.A. Dickey being the least similar pitcher (I know, you're shocked). In fact, Dickey is so dissimilar to Tanaka that he registers a negative similarity score, an extreme rarity. But you'll notice the gap towards the upper end of the similarity scores. There's only one pitcher who is considered a reasonable match to Tanaka, with the only score above 0.8 at 0.8978. After taking all this into account, Tanaka's best comparison in terms of arsenal is...

...Hiroki Kuroda. According to the individual scores, Kuroda and Tanaka have reasonably similar fourseam fastballs (0.8025), sinkers (0.9055), and splitters (0.9445). Only the sliders differ, and even that isn't to far off (0.7271). Finally, here's a list of Tanaka's top-20 comparisons, with their scores for each individual pitch.

So there you are Craig. It seems that the eyes and the algorithm match up here, as Hiroki Kuroda turns up in both analyses. If only this happened more often.