On Zach Britton, Sinkers, and Prospects Panning Out

Formerly a top prospect, Zach Britton's role in the Orioles' bullpen this season seems like a demotion for the former starting pitcher. Ineffectiveness has limited Britton in his efforts to establish himself as a starter, as he spent much of the last two seasons in the minors despite throwing over 150 big league innings in 2011.

Share All sharing options for: On Zach Britton, Sinkers, and Prospects Panning Out

For Britton, it had to be disappointing to battle for a spot in the O's bullpen during Spring Training. After all he had the pedigree of being a top prospect. The O's selected him in the third round of the 2006 MLB draft and gave him a $200K bonus to lure him away from a scholarship at Texas A&M. At the time, Britton had a promising scouting report:

He jumped on radars when his fastball hit 94 mph early this spring. He hasn't kept that up, but he's a projectable southpaw whose curve should continue to improve.

That's a little bit of foreshadowing. A few years down the line, Britton began to pop up on prospect lists across baseball. Not only was he moving into the top 5 on the O's farm, but he also appeared on the national prospect radar. In July of 2012 Britton was named the 10th best prospect in baseball by Baseball America:

10. Zach Britton, lhp, Orioles (Triple-A Norfolk): Scouts would like to see a better changeup; right now, his is below-average. But his turbo sinker, touching 94 mph, is the minors' best (3.68 groundout/airout ratio), and his slider is pushing into above-average territory.

Ironically Zach Britton earned his spot on the list in part because several players graduated to the majors, including current bullpen teammate Brian Matusz (ranked #5 going into the season). If you're picking up the pattern, you'll realize that Britton's value as a prospect was largely tied to his 94 mph power sinker.

Zach Britton broke into the big leagues in 2011, throwing 154.1 innings as a rookie. He posted an ERA of 4.61, but his FIP suggested that he was better than that. In that rookie season he posted a GB% of 52.8% with 1.86 ground balls for every fly ball he gave up. There was room for optimism that he could improve those figures and see better results.

In 2012 Britton saw limited action in the majors, but was able to up his GB rate to 60.8% with 2.62 ground balls for every fly ball. Unfortunately he started walking more hitters and the net result was a worse performance on the whole. 2013 was more of the same as Britton posted a solid 58% GB rate, with 2.59 ground balls for every fly ball he gave up. However, Britton all but forgot how to strike batter out, and only marginally improved his walk rate over 2012. As a result, 2013 was another forgettable season for the former top prospect.

Britton's days of mowing down opposing hitters and getting ground ball after ground ball were firmly in the past. So was his velocity. The chart below shows Britton's monthly average velocities for his fastball and sinker: 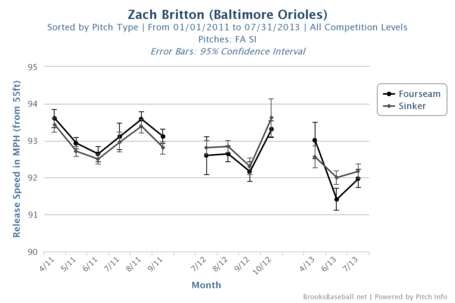 At no point from 2011 through the middle of 2013 did Britton break that elusive 94 mph barrier. The closest he got was 93.62 with his sinker in October of 2012. Full disclosure though, that was one appearance with one inning pitched, and in one of his two career relief appearances prior to 2014.

Velocity was a major issue for Zach Britton. Was. Baltimore put Zach Britton in the bullpen to start 2014, and the velocity is back from his prospect days, plus some. So far this season Britton is averaging 95.36 mph with his sinker, a significant improvement over his 2013 velocity. He's thrown pitches like this one:

That was a 94 mph sinker. That gif goes by a little quickly, perhaps a slow-motion version will allow us to appreciate Britton's sinker a bit more.

To summarize, that pitch:

This is vintage Zach Britton. This is why so far this season Britton has given up 16 ground balls compared to just 2 fly balls and 2 line drives. That's 8 (!) ground balls for every fly ball that he's given up thus far in 2014. Granted, Zach Britton has only thrown 8.1 innings this season, and that should be a small sample size red flag if there ever was one. I'm not suggesting that he's going to get 8 ground balls for every fly ball he gives up all season. He is, however, pitching much better than ever before in his career, and it's because of a significant change in his stuff.

Britton doesn't have the best sinker in baseball. In fact, his sinker is relatively unremarkable when you compare different aspects of it to the rest of the league. He's 52nd in vertical movement, and 21st in velocity. Only 80% of the balls in play against his sinker are ground balls, which doesn't match Carlos Martinez's 100%.

What Britton does have is his confidence back, along with a pitch that once made him one of the most sought after young pitchers in the game. Only one pitcher has thrown more sinkers than Britton: former O's closer Jim Johnson. His results have been the exact opposite of Britton's this season, which shows you how bad a sinker can be when it's not on. Fortunately for the O's, Britton's sinker is definitely on early in 2014.

I mentioned Britton's confidence in his sinker being back, and that couldn't be more true. He's throwing it nearly 90% of the time, ditching all other pitches except for his slider. That's over 20% more frequently than Jim Johnson.

O's fans are familiar with how good a sinker can be when utilized properly:

Now they have another reliever throwing a lot of sinkers, only these are coming from the left side. This isn't a post about replacing Jim Johnson or how Zach Britton is going to be a shutdown reliever. It's not trying to make a case that Britton should get a shot in the rotation, or that the O's need to use him in different situations.

This is simply a post that wants to celebrate a young pitcher, this is Britton's age 26 season after all, finding the one thing that made him so good in the first place. This post is celebrating a forgotten prospect who's showing signs of resurrecting the pitch and career that he should have had all along. This is a post celebrating great pitching.