We're only about a dozen games into the regular season, but Alexei Ramirez is doing a fine job controlling the strikezone.

If you woke up on Saturday morning, rolled out of bed, and fired up your device of choice while directing it to the FanGraphs WAR leaderboard, you would have found an interesting name at the top. Certainly, two weeks of games is just a small sliver of the overall picture and no one is going to argue this player is the new Mike Trout. Weird things happen in small samples, but Alexei Ramirez and his gaudy 0.9 fWAR catch your eye. Not because of the results, which have a healthy dose of BABIP (.432), but because of one potential reason for them that might not be such a fluke.

Ramirez has always been a low walk, low strikeout player (5.0% BB rate, 11.7% K rate in 3765 career PA through Friday). It's nothing new that he's putting the ball in play quite often, but his strikeout rate through 45 trips to the plate this year (6.7%) is more than three percentage points lower than his best career mark (10.1%).

The rule of thumb is that batter strikeout rates start to stabilize around 60 PA, and by the middle of the week, Ramirez will be there. It's entirely possible he could whiff a few extra times and this will be meaningless, but it's pretty hard to find meaningful statistics in April. This might be something to watch over the next few days and weeks because it's not just the results that have improved, it's also the underlying plate discipline numbers as well.

The effect seems to exists on hard, breaking, and offspeed pitches, but it's really too soon to say anything definitive. That's the trouble with April. You're exited to analyze baseball again but the baseball you want to analyze is held together with toothpicks and Scotch Tape. Maybe it's meaningful and maybe it isn't.

If we look back across time, his history indicates that these numbers aren't completely unexpected over a month long sample, but they are at the low end of things generally speaking. (You'll obviously want to ignore those big March and October spikes.) 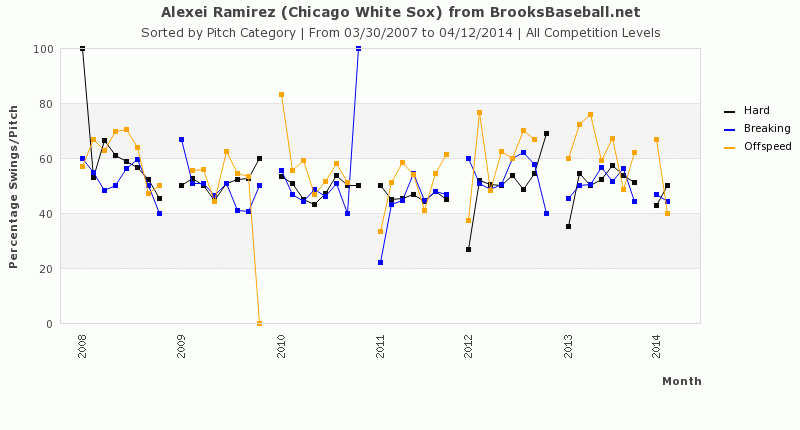 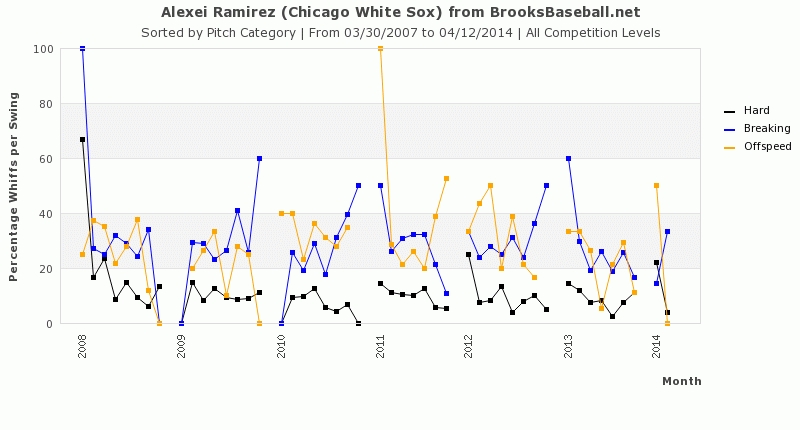 While real analysis is difficult in April, April is great because it provides so many potential stories to pursue. Charlie Blackmon is crushing the ball. Is he Chris Davis or John Buck? We can make some guesses, but really we're just heavily regressing our expectations to the mean. A small amount of April data doesn't lead us to update our beliefs too much. But that data is enough to hold our attention and keep us coming back to check on things.

If Alexei Ramirez has improved his approach to this degree, it will go a long way for a White Sox team that really struggled at the plate in 2013. Putting even more balls in play should be a boon for Ramirez for obvious reasons, but also because it might occasionally lead to a relatively slight person crushing two pitches from one of the game's most exciting younger starters.

Even if this isn't a new and improved Ramirez, it's still been fun to watch.