We call our blog "Beyond the Box Score," so how do we look *beyond* the box score?

Share All sharing options for: The Beyond the Box Score guide to looking beyond the box score

We are really lucky to live in the modern era. Baseball statistics are everywhere - which is great for blogs like this one. Fans no longer have to wait until the morning paper arrives the next day to know who won each game, which player had a great night at the plate, or how each team stacks up in the standings.

With so much data available, the way we look at box scores has changed too. We are no longer confined to the simple box score in old fashioned newspapers. We can find out so much more. As an editor for this site, I thought it would be fun to show our readers how we go about looking beyond the box score for a game.

Before the game even begins, I like to look at the game notes. MLB offers a press pass, where each team publishes a set of notes that are released before first pitch. This is where you can find interesting facts, stats, and story lines related to that night's game.

Baseball-Reference offers a preview of each game, that while not aesthetically pleasing, once comfortable with the interface, it is packed with valuable information. Most useful, the preview outlines the bullpen usage of each team, so you know which pitchers have been used, how many pitches they threw, and on which day. You can also see on one screen all of the match-up information in terms of each pitcher vs. batter head-to-head stats.

I will get into this next source in more detail later, but Brooks Baseball is a must-have open tab on your laptop while watching the game. Brooks offers detailed data on pitch tendencies for each pitcher and batter. I like to know the pitches each starter throws, and if there are any trends to try to notice.

One of my favorite places to look during a game, and especially after, is FanGraphs live scoreboard. 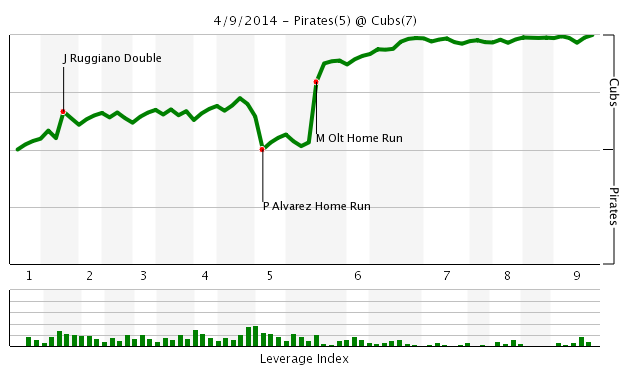 There is a lot of information available on FanGraph's scoreboard for each game, but the graph above gives a great summary. Using win expectancy measures, we can see how the chances for each team to win changes throughout the course of the game based on each play. For example, Mike Olt's home run in the fifth increased the Cubs chances of winning the game from 53.1% to 79.5%.

FanGraphs offers everything you need in terms of traditional box score stats, as well as all of the advanced ones.

As advanced stat people, we know that there is more to evaluating a pitcher's performance than simple earned runs and hits. Brooks Baseball provides instant tagging of each pitcher's pitches so that we can see precisely how a pitcher performed in the context of each pitch.

Within 15 minutes of a game ending, those who are statistically-inclined can view detailed data on each pitcher's performance. For example, the table below shows Jason Hammel against the Pirates. We can see that his curveball broke -9.19 inches vertically, and that he threw his sinker 34 times, getting 19 strikes, but zero swings-and-misses.

Besides the individual pitching performances, how many times do fans (and players alike) complain about the home plate umpire? Have you ever left from watching a game with the feeling that your favorite team was squeezed at the plate? With Brooks Baseball, we can see precisely how accurate an umpire was on a particular night. The chart below shows Laz Diaz calls for left-handed hitters in the Pirates vs. Cubs game on April 9th. 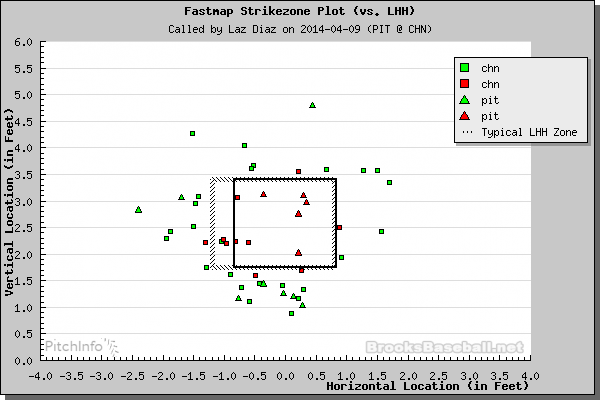 Any pitch related data a fan could ever want to know, including pitcher release points, strike zone plots, and more, can be found on the Brooks Baseball site for each game.

If power is what you are into, there is ESPN's Home Run Tracker tool. On this site, every single home run is tracked. For each long ball, we can learn how far the ball traveled, the speed off the bat, the elevation angle, how many parks it would have been a home run in, and more. Best yet, there are links to videos so you can see the actual home run.

Perhaps baserunning errors are your thing. There is a wonderful site dedicated to tracking all extra base outs, which are outs on would-be sacrifice flies, pickoffs, double offs, fielder's choice outs with an open base, batter's interference, runner interference, or any other method for which a baserunner makes an out on the base paths (excluding stolen bases).

As many sources as I have listed, there are so much more. A new one is the wonderful site, Baseball Savant, which offers detailed head-to-head statistics in graphical form, as well as the best PITCHf/x search tool on the web. More tools are being created every day by baseball fans looking to capitalize on all of the data readily available on each pitch, play, and game.

If you are a reader of this site, and made it this far down in the article, you surely have an interest in looking beyond the box score. Hopefully, this guide will help you do that.