The season is still very young, but Justin Verlander shows a significant left-right wOBA split for the first time in his career.

Share All sharing options for: Justin Verlander's wOBA split: Cause for concern?

While you can't really hang your hat on much statistically after 14 innings over two starts, the beginning of 2014 for Detroit Tigers ace Justin Verlander is nonetheless surprising. An abysmal strikeout rate (8.5%) and creeping rise in walk rate (also 8.5%) have partnered with a depressing xFIP (5.59) so far, having some scratching their heads as to the cause of the sputtering out of the gate for Verlander. Add to it a small decline in fastball velocity and the scenario is ripe for panic: 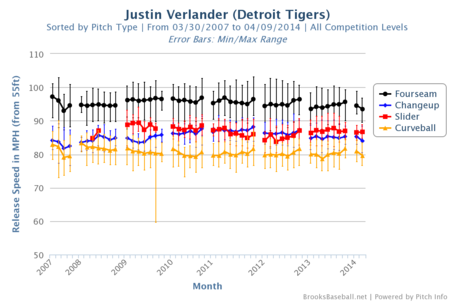 Despite the discouraging numbers, Verlander has battled to a 3.87 RA9 and 89 FIP-, so he has obviously not completely gone off the rails, performance-wise. However, a look at his left-right wOBA splits this year and since 2007 do show a discouraging spike: 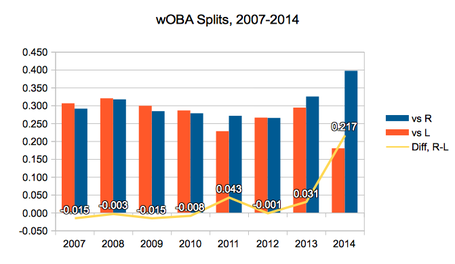 Historically, Verlander has been very good against both sides of the plate, being a little tougher against lefties, on average. However, 2014 has shown a 217-point wOBA difference between lefties and righties, with righties wOBA-ing at a 0.397 clip against him in his 14 innings this year. Verlander has also shown a concomitant added nastiness against lefties, with them mustering a 0.180 wOBA-against.

Has there been anything that the hurler has done differently thus far in the infancy of this season that might hint at the jump in offense righties have fared against him and could this be at the root of his shaky start?

Let's keep our focus on what Verlander has done against righties, as his stats against lefties are still superb; here, we find how Verlander has fared with each of his pitches, this season and last:

In terms of pitch selection against righties, the only dramatic change has been going more often to his curveball—we find a nearly seven percent jump in usage this season. In terms of pitch movement, again, we only see significant changes with the curve, with it losing roughly an inch and a half of vertical movement (pfx VMov) and quarter inch of horizontal movement (pfx HMov). The curveball was the only pitch to lose movement on both planes; anecdotally, Verlander's fastball in 2014 has shown increased movement in both planes, compared to last season. In terms of damage (measured by wOBA), we find the fastball and slider being troublesome so far for Verlander.

Thus far, we have a slight increase in curveball usage, it having a little less bite to it movment-wise, but the fastball and slider being the main culprits behind Verlander's righty woes and left-right wOBA disparity. Let's now look at how well he is locating his pitches, comparing 2013 (heatmaps to the left) to 2014 (heatmaps to the right). 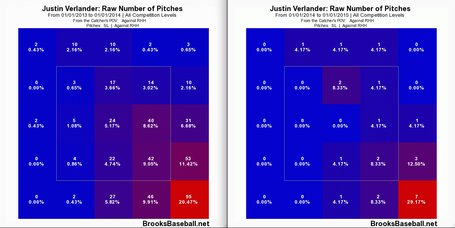 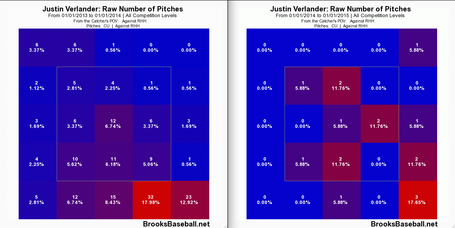 For the sake of brevity, I have left out heatmaps for changeups, both because it is Verlander's least-used pitch against right handers, but also there were little to no differences between the two seasons of interest with respect to pitch locations.

Starting with the heaters, we don't find any egregious departures from 2013 to this year; Verlander still peppers the strike zone with the fastball, using the upper portion of the zone quite handily. If anything, Verlander appears to be pounding the outside corner a little more and jamming righties inside a little less so far in his 14 innings in 2014.

Moving to the other bugaboo for Verlander, we see the slider still being buried down and away this year, perhaps even more so than 2013. Overall, nothing screams out with respect to the location of the slider that might be indicative out trouble.

Last, we have the curveball—so far, Verlander has had success with it in 2014 in terms of wOBA-against, thus making sense that he would rely upon it more heavily compared to 2013. Yet, we see that his location of the bender to be a tad ominous; compared to last year, Verlander has left the pitch up in the zone quite a bit. Sometimes, the occasional drop-in curve to start an at bat, or even using it during a fastball count to fool a hitter and disrupt timing is a great thing and has been a steady presence in his repertoire for many years. However, the pitch seems to be getting a lot more of the plate this year; this, with the aforementioned drop in movement on the pitch, could lend some caution as to the long term success of Verlander's approach for a full season. Less movement and more time in the strike zone could lend the curve to get hit a little more and a little harder than it has been thus far.

Overall, much of what we see with Verlander in 2014 with the drastic wOBA split is the result of small sample size—despite some mild drop in fastball velocity, he appears to be locating the heater well and has even added some movement to the pitch. With respect to the slider, he appears to have made a couple of bad pitches, but overall is locating it well. While the curveball has been a great weapon for Verlander now and in season's past, his less than ideal location of the pitch and the slight drop in movement might lead to it getting hit a little harder against right handers. It's a long season and while we have learned much from these initial innings and offerings from Verlander, the hiccups out of the gate appear to be just that and nothing that elicit a sense of foreboding.