Jon Lester started Opening Day for the Red Sox against the Baltimore Orioles and managed to continue the success he had during the second half of last season. It's a sample size of one game, so caveats abound but one thing seemed off—did Lester drop his release point compared to earlier in his career?

Share All sharing options for: Did Jon Lester change his release point?

Boston Red Sox lefty Jon Lester's 2013 was a tale of two seasons, as his performance improved dramatically from the first half of the season to the second half. Alex Skillin previously explored this phenomenon during the offseason as he looked to determine Lester's value. Alex mentioned several factors that no doubt played a role in his improvement including an increase in fastball velocity and increased fastball usage. As Lester took the mound for 2014 Opening Day, though, another question and possible result popped up.

@TClippardsSpecs Looks same as from 2nd half last year. Now that you mention it, would be interesting to see if he lowered it at all in 2013

This is something I noticed as well; it seemed Lester was coming from more of a 3/4 arm slot than ever before. Highlights from the game don't help too much, largely because of the camera angles used in the broadcast. Luckily Brooks Baseball provides data shortly after the completion of the games, and below is an image of the release points for Lester over the course of the game: 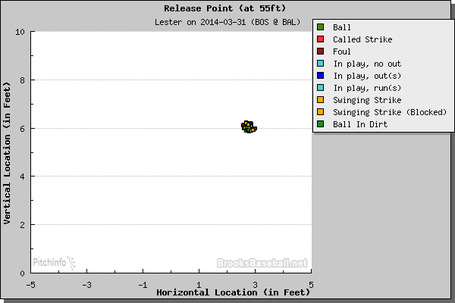 You can see that all of Lester's pitches were released from almost exactly the same location on the mound. 6 feet above the ground and roughly 2 feet, 9 inches to the right of the center of the rubber (9 inches is an approximation for roughly 2.75 feet on the chart. These images are from the catcher's point of view). How does that compare to the second half of last season?

Below is an image showing Lester's release point from July 16th (the day after the 2013 All Star Game) through the end of the season: 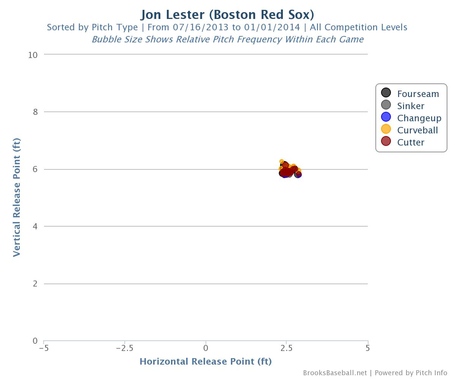 As you can see Lester's release point was very consistent, and slightly different than the one from the Orioles game here in 2014. He released the ball pretty consistently from 6 feet above the ground and 2 feet, 6 inches to the right of the center of the rubber. That's slightly further towards the middle of the rubber, but only by a few inches. Compare that to the first half of the year where Lester's release point was a little less consistent: 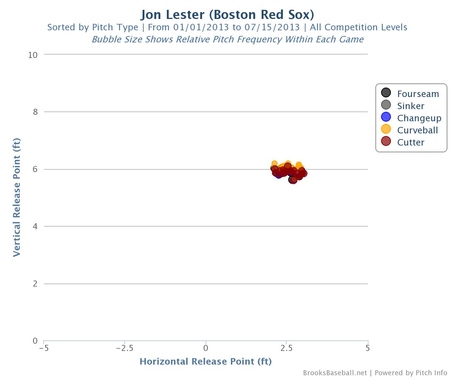 Here you can see that Lester moved around on the rubber a bit, but his vertical release point was stable. It dipped down below 6 feet from time to time, and occasionally above that mark, but generally it was stable at that point.

One noticeable trend though that Alex mentioned in his article is that Lester relied on a lot more fastballs than normal in his start against the O's. 87.5% of the pitches Lester threw in his Opening Day start against Baltimore were either four seam or cut fastballs. He threw one sinker (or two-seam fastball) and twelve either curves or changeups. That's a significant increase in fastball usage, although I should mention that this has a small sample size warning all over it. It's possible Lester is just throwing more fastballs because it's early in the season, but it was a trend in the second half of last year that Alex picked up on so it's worth watching as the season progresses.

I was convinced that Lester had lowered his release point in an effort to create more deception or give his pitches a new look to opposing hitters. The data though doesn't support that claim. The change in his pitch usage seems to be a common thread to watch for—compare 2014 to 2013 for yourself!

Special thanks to Alex Skillin and Stuart Wallace for the inspiration to write this post.