Alcides Escobar and improvement in 2014

Alcides' Escobar's poor 2013 performance was one of many things that held down the Royals. Can he rebound in 2014?

Share All sharing options for: Alcides Escobar and improvement in 2014

Alcides Escobar, shortstop for the Kansas City Royals, ranked as the worst qualified offensive player in the league in 2013 with a 49 wRC+. Luckily, he avoided Yuniesky Betancourt infamy by being a strong defender, but for the Royals to make a playoff push, Escobar will need either to invent a time machine to grab his 2012 version or figure out what went wrong in 2013. I will herein offer some suggestions for how Escobar can fix his offensive offense in 2014.

Escobar was about average in terms of production on ground balls, but he fell apart on line drives and was abysmal on fly balls. When your fly ball production is worse than Tony Pena, Jr.'s, another former Royal shortstop who has since converted to pitcher due to his lack of hitting ability, something needs be fixed. Since he is a shortstop, he is not expected to send extraterrestrial communication like Chris Davis, but even Elvis Andrus produced a .183/.385 line on fly balls, which would be...acceptable.

One potential reason for Escobar's weak performance on fly balls were his pull ratios, which are shown in the table below. A pull ratio is defined by Tony Blengino as the ratio of batted balls in the pull part of the park divided the opposite part of the park, (LF + LCF)/(RF + RCF) in the case of right handed hitters.

Escobar goes the opposite way far more than league average on all batted ball types, which is good for ground balls in order to avoid being shifted by the defense. Spraying the ball in the air is generally a good thing, too; Kauffman stadium has an expansive outfield, and hitting the gaps is good there. Shown by his production on fly balls and .066 isolated power though, Escobar utterly lacks power. Given that he lacks power, pulling the ball in the air may not benefit him very much. Then again, take a look at his 2012 production and pull ratios.

Escobar had a much higher overall BABIP in 2012 than 2013 (.344 vs .264), and the table shows that despite having the same LD% in 2012 and 2013, those line drives affected his BABIP very differently. Escobar's pull ratio doesn't appear to have had much effect on his LD production; I expect that going forward, Escobar's LD production will regress upward regardless of his pull ratio. However, his fly ball production was much better in 2012, and he pulled the ball more.

What these tables suggest is that Escobar should avoid fly balls like the Spanish flu, but perhaps pulling the ball in the air just a little bit more would help those fly balls he does hit to be something more than irrelevant. Keep in mind that this is comparing only two seasons; for his career, Escobar's fly ball production is better than it was in 2013 with a similar pull ratio. Escobar's automatic outs fly balls could regress upward in 2014 without pulling the ball more, but 2012 can't be ignored.

The second aspect of Escobar's unfortunate 2013 performance was his plate discipline. Escobar had a 36.3% O-Swing rate, which hurt both his BB% and K% and caused a lot of weak contact. Escobar swung at, missed, and made weak contact with lower pitches far too often in 2013. 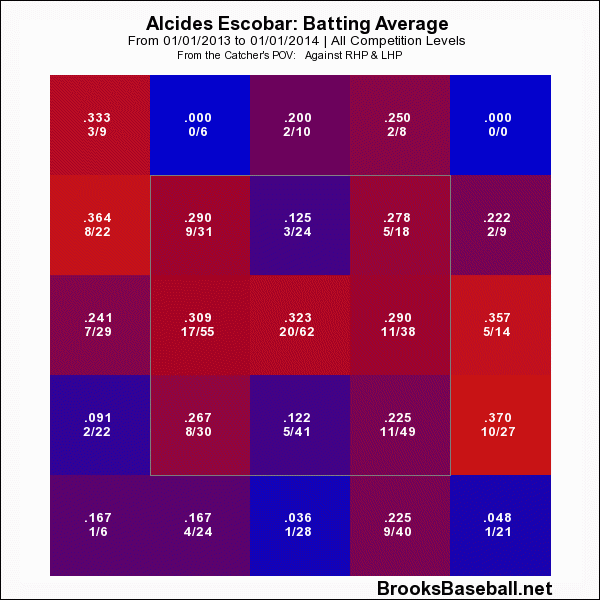 In order to return to being a viable hitter, Escobar should at least lay off low pitches out of the zone and consider swinging less at lower pitches in the zone. In addition, he should change his batted ball profile back to ground balls and line drives. Since he will never achieve anything close to league average production on fly balls, limiting those should be a priority. Escobar should also focus on pulling the ball a little bit more when pitches are located in places where it makes sense, which should hopefully increase the quality of his air contact. Some combination of these things could bring his overall offensive profile to that of Andrus. With comparable defense to Andrus, Escobar could provide similar value for a tiny fraction of the price, which is what the supposedly tapped-out Royals need in the coming years.

All statistics courtesy of FanGraphs and Baseball Heat Maps and Brooks Baseball.

Kevin Ruprecht is a contributor for Beyond the Box Score. He also writes at Royal Stats for Everyone.You can follow him on Twitter at @KevinRuprecht.