Although Alfonso Soriano is nearing 40, he is still as productive as ever.

One of my most vivid memories from when I was young was the last week of the 2002 season. While there was certainly a lot going on in Major League Baseball that season—NL MVP Barry Bonds had a ridiculous 12.4 fWAR, only 0.1 shy of his 2001, 73 home run season; Randy Johnson was as dominant as ever, throwing 260 innings for an ERA- of 54 en route to the NL Cy Young Award; and Miguel Tejada and Barry Zito, the AL MVP and AL Cy Young winners, respectively, led the Oakland A's to a 103-win Moneyball type of season—my eyes were focused elsewhere.

I was busy watching every game for the New York Yankees that last week of September, focused on the once-in-a-lifetime player by the name of Alfonso Soriano as he tried to achieve the fourth ever 40 home run, 40 stolen base season.

At the time, Soriano was 26 years old and playing in just his second full big league season. Although he didn't reach the 40-40 milestone that season, falling just short with 39 home runs and 41 stolen bases, Soriano actually accomplished the feat four years later, hitting 46 home runs and stealing 41 bases in his lone season with the Washington Nationals. In other words, that magical ‘02 season was not a fluke, by any means.

Flash forward to the present day, twelve and eight years, respectively, after those two jaw-droppingly spectacular seasons, and you'll see that Soriano has been going through a bit of a renaissance.

While the steals have, for the most part, subsided—although in 2013 he stole 18 bases after not cracking double digits since 2008—here are Soriano's numbers over the past five years, his age 33 through 37 seasons, compared with his career stats:

As you can see, his power has not only stayed in his later years, but has actually been marginally better compared to his career averages. He's homering more often—roughly 18 and a half plate appearances per home run in 2013 compared to just over 20 for his career—and is smashing more fly balls out of the park than almost anyone—his 18.9% HR/FB ratio in 2013 ranked 14th in the league, trailing younger power guys like Chris Davis, Paul Goldschmidt, and Giancarlo Stanton, among others. In fact, the average age of the 13 players ahead of him is just over 27 and a half, almost a decade younger than Soriano was last year.

What exactly has caused this resurgence? Take a look at how Soriano has done in New York since he was traded in the middle of the 2013 season:

Although his split in New York is a relatively small sample size, it's clear that he's found a new groove in his old home. Part of what has been attributing to that is the differences in right field for the two home stadiums, Wrigley Field and Yankee Stadium. First, here's Soriano's spray chart from his time in Chicago during 2013: 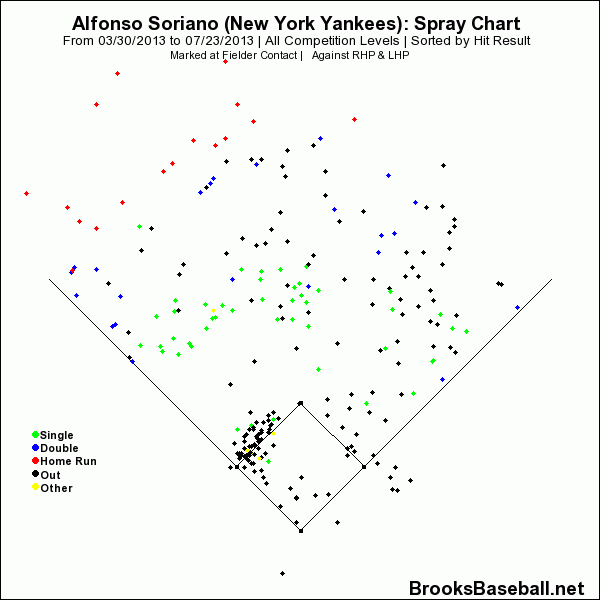 Now, here's his spray chart from the rest of 2013 when he was playing with the Yankees: 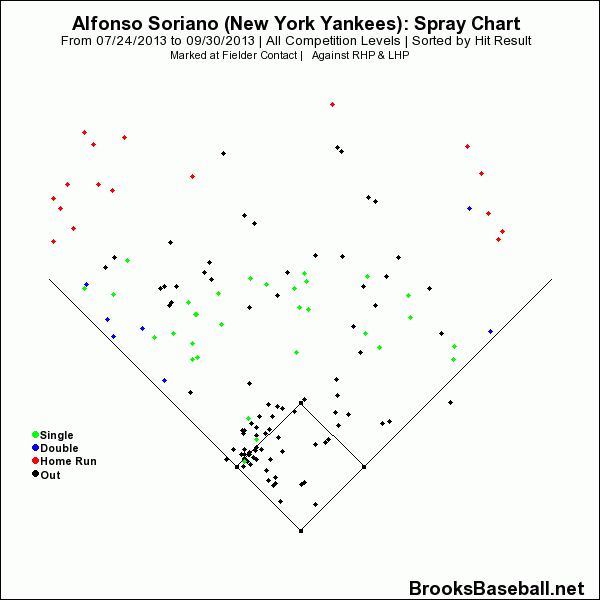 If you look at the difference between outs versus home runs in right field from his time between the two teams, you'll see that several hits that would have been outs before are now finding their way over the right field wall. Given that Wrigley Field's right field fence is 353 feet from home plate, as opposed to Yankee Stadium's just 314 foot distance, it's not all that surprising that there would be an uptick in home runs for Soriano.

Still, with Soriano on the wrong side of 35, you should have been safe to assume that his power would steadily decline; that he would, like most other players have before him, finally wear down. Just two years shy of 40, however, Soriano doesn't seem to want to let go yet.

And, with a full season in New York in a better position—playing in more of a hitter's park, not having to play defense every day—Soriano just might have another power-filled season to look forward to in 2014.