We revisit the Medlen/Strasburg debate on the best method for starting pitchers returning from Tommy John surgery and look at whether leverage plays a role.

Share All sharing options for: A matter of leverage? Medlen/Strasburg revisited

Despite a spring where the number of pitchers succumbing to ulnar collateral ligament (UCL) tears appears to have spiked, the news of Kris Medlen requiring a second Tommy John surgery for said tear has not gone unnoticed. While not even the only pitcher on the Atlanta Braves to require a second surgery, the handling of Medlen by the club after his first procedure, concomitant with another NL East pitcher's journey back from Tommy John surgery, made him the poster boy for a more thoughtful handling of innings and appearances postoperatively.

Yet, here is Medlen, a little over three years beyond his first injury, now requiring another procedure while his NL East counterpart and subject of the 'Strasburg Shutdown', Stephen Strasburg, is still going somewhat strong after his UCL repair; Strasburg had a procedure to clean out bone chips in his elbow in the offseason, so he is not totally unencumbered by injury. Was the shutdown the key or was there something else at hand?

The answer is inevitably a complex one; however, some thoughtful research is happening that goes beyond pitch counts, fastball velocities, and innings limits, and was discussed in an injury analytics panel at this year's SABR Analytics conference. Baseball injury research luminaries Dr. Glenn Fleisig of the American Sports Medicine Institute and Los Angeles Dodgers head trainer Dr. Stan Conte, along with Chris Marinak of MLB, discussed a number of advancements in the field, with one matter discussed being the potential role of leverage for a given pitch in injury prediction and surveillance. There is a great piece at Forbes that discusses many of the details surrounding the panel as well and other topics regarding UCL tears and surgeries and I encourage readers to give it a look; for now, let's take the leverage ball and run with it, using Medlen and Strasburg as our lens to see if leverage (as measured by leverage index) has played a tangible role in the outcomes of our pitching pair.

Leverage and its measurement isn't a new concept—you can find it in a number of places, including FanGraphs. However, let's take a leap and hypothesize that with increasing leverage comes an increase in effort and intensity with pitches thrown in higher leverage situations. The longer you are in higher leverage situations, the more intensity and effort involved with delivering a pitch, which (again, hypothesizing) leads to a more rapid rise in fatigue. However, this fatigue isn't necessarily quantified in pitch counts, so a more stressed starting pitcher due to higher leverage is allowed to go to their 100 pitch count, despite giving a more intense effort due to leverage. Could this increase in leverage in the face of pitch counts play a role in injury potential, such as a UCL tear?

With this and our duo in mind, the question now becomes: Did the use of Medlen in relief roles, which, on average, come in higher leverage situations, possibly play a role in his second UCL tear?

As alluded to previously, leverage stats are easy to grab—for this research, I used the 'LI' values found in each pitcher's Play Log card at FanGraphs for a given season. Here's what they look like for both Medlen and Strasburg, keeping in mind for each their starts and appearances, as well as that they both had their surgeries between their 2010 and 2011 seasons:

With this table, we see that in spite of the relief appearances that Medlen had before and after his first TJ surgery, he averaged less stressful innings on average compared to Strasburg; while his 2011 showed him to have a spike in leverage, small sample size (2.1IP) reigns over Medlen's first two appearances post-TJ and this season's numbers should be taken with a grain of salt. Yet, we do see that the season right before and after surgery that Strasburg had roughly the same average LI, but a narrower range, topping out around a 2 LI.

Note: Medlen only had one relief appearance in 2013.

In an interesting twist, Medlen's relief appearances on average were not as high of leverage in contrast to his starts; however, he did have a higher max leverage range with relief appearances in comparison to starts. Taking this information and comparing it to Strasburg's starts and we see that in his starts, Medlen's appearances, regardless of type, were less stressful than Strasburg's starts. Performing t-tests to compare the differences between the various pitcher states—Medlen starting-Medlen relieving, Strasburg-Medlen starting, Strasburg-Medlen relieving, and Strasbug-Medlen overall— found no statistically significant differences.

While still on the concept of LI averages and ranges across seasons, let's graphically look at these values for both Medlen and Strasburg across year and in comparison to another starter; one who has not had the surgery and is arguably one of the more durable starters across the years of interest—Bronson Arroyo: 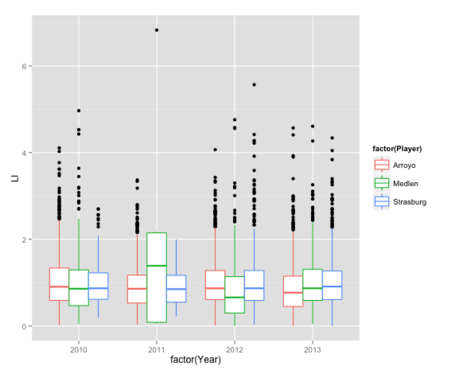 Further clarifications on how to decipher a boxplot can be found here, but Medlen's 2011 notwithstanding (as previously discussed), we see that neither pitcher's season was too dissimilar on average compared to the healthy workhorse Arroyo. However, we do see that while Strasburg has had more outlying, higher leverage outings post-TJ (marked by black dots), Medlen did have quite a few more high leverage outlier outings (typically in relief) prior to his first UCL tear; yet, compared to Arroyo, these outings weren't out of the ordinary for a starter, leverage-wise. Looking beyond leverage momentarily and looking at pitches per plate appearance, we also find that Medlen had fewer pitches per PA in comparison to Strasburg, though not at a statistically significant rate on average, per Student's t-test (p = 0.086):

So far, we don't find a smoking gun with respect to leverage that delineates the trajectory of Strasburg from Medlen and the unfortunate second tear that the Atlanta hurler suffered. Let's take one last retrospective look at their differences, this time, taking the concept of leverage and applying it to base-out state.

As hypothesized, higher leverage situations lead to an increase in more stressful, maximal effort deliveries and pitches. With that in mind, I looked at the average velocity of each pitcher's most thrown fastball offering—for Medlen, a two-seam fastball, for Strasburg, a four-seam fastball—across base-out state in their 2010 (pre-TJ) season to see if they in fact threw it harder, the higher the leverage. I also looked at the same data for their first full season post-TJ— 2012—and 2013 seasons:

For the sake of clarification and brevity, below are the fastball velocity averages for both pitchers in 2010, 2012, and 2013 with the bases empty as well as with runners on base, a higher leverage situation overall; differences between the two states are also included:

It appears that Medlen historically has shown a propensity for throwing a little bit harder (at least his two-seamer) with runners on base and higher leverage situations. While not a particularly robust method or result, it is something that deserves further investigation, in particular, looking at similar results with further refinements of base-out state, season, and pitch type. With the data presented, it is difficult to peg anything on Medlen's injury situation to his back-and-forth to the bullpen and the increased possibility that the increase in leverage and possible effort exerted with each pitch in those higher leverage situations; yet, it does provide pause as to whether variables beyond what's seen in this data could play a role in his injury status.

While these stats aren't necessarily exhaustive, they are interesting kernels of information that lend some potential credence to the idea that more stressful situations could potentially be quantified in a more concise fashion and used to better elucidate a particular player's potential for injury. For Medlen and Strasburg, their pairing will be forever indelible due to the teams they play for and the proximity of their UCL injuries and surgeries, as well as the way each was handled in rehab, unfair as that might be. However, the comparison and contrasting of their careers could be a fruitful and worthwhile endeavour, as the proclivity of UCL tears continues and the need for improved methodologies for the surveillance, treatment, and rehabilitation of such injuries increases, as does a reliable method for how to introduce starting pitching prospects into major league innings, be it via the bullpen or a slow, innings-controlled incorporation into the starting rotation.

All data courtesy of FanGraphs and MLBAM.