Behind the bats of Wil Myers and Evan Longoria, a promising young rotation, and the genius of Joe Maddon, the Rays will contend for the AL pennant again in 2014.

Most sabermetrically inclined fans love the Tampa Bay Rays, but I'm not sold. To me, the Rays are the hipsters of the baseball world: doing everything you do, only more intensely. Oh, you're having a beer? He's having an imperial IPA with a 15% ABV and more hops than Neil Armstrong. You like Sonic Youth? Check out the double album he just bought (on vinyl, of course): two hours of their noise music. You say managers should switch pitchers more often to avoid the times through the order penalty? Joe Maddon used four pitchers to get through the first five innings of a scoreless game last season. How many people attended last night's game at the Trop? Oh, it's an obscure number; you probably haven't heard of it.

The Rays were tied for first in the AL East on August 24, but a rough start to September dropped the Rays into the Wild Card chase. Tampa Bay stayed alive by rattling off seven straight wins as the month wound down, then won three straight do-or-die games in three separate cities over four days to make the ALDS. The Rays wound up falling to the event world champion Red Sox, three games to one. Their lone win was certainly memorable, though, as Jose Lobaton hit a walk-off homer off Koji Uehara into the sting ray touch tank in right-center field. (Contrary to initial reports, the inhabitants were unharmed.)

1. Traded OF Todd Glaesmann and RP Justin Choate to the Diamondbacks for RP Heath Bell; received C Ryan Hanigan from the Reds - Compared to last winter's James Shields deal, the Rays' participation in this three-way deal seems underwhelming. But Hanigan represents an important upgrade at catcher for Tampa, who silently tolerated 313 Jose Molina PAs for 749 innings of Molina's pitch framing skills. Hanigan's pitch framing may not be at the level of Molina's, but it's still really good, and his bat is certainly better. Meanwhile, Bell gives the Rays important depth in the back of the bullpen to replace departed closer Fernando Rodney.

2. Signed RP Grant Balfour to a two-year, $12 million contract - Smart baseball fans have griped for years about teams overpaying relievers said to possess a "closer's mentality." And small-market teams seemed to agree, as the A's and Rays happily turned castoffs and young talent into Proven Closers ... then flipped them for cost-controlled talent before they could regress. This year, though, the Rays are making a serious investment in their bullpen, pairing Bell and Balfour with Juan Carlos Oviedo, three veteran arms with closing experience. It will be interesting to see how manager Joe Maddon deploys these arms in support of his young starters.

3. Re-signed C Jose Molina to a two-year, $4.5 million contract - Molina posted an OPS+ of 73 over the past two seasons, which FanGraphs estimates as 20 runs below the average catcher. But Molina still re-signed for two years on the strength of his pitch framing (Maddon estimated after the 2012 season that it was worth 50 runs) and, if you believe in that sort of thing, his ability to tutor the Rays' up-and-coming starters. 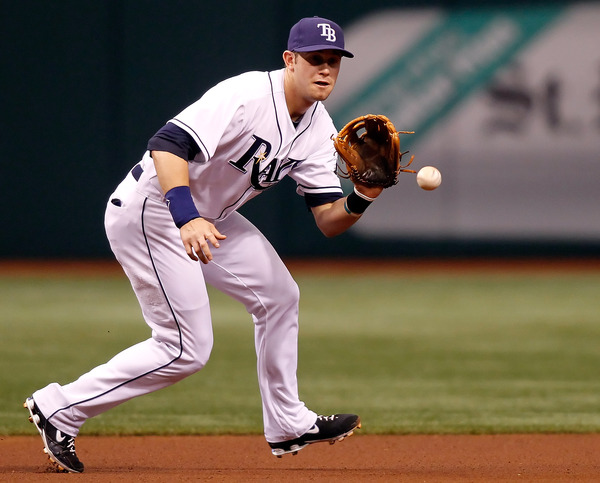 The Rays have a number of position players worth your time. Perennial MVP contender Evan Longoria compiled over 6 bWAR for the fourth time in his six-year career last season, while staying healthy enough to play 160 games for the first time. 2013 AL Rookie of the Year Wil Myers will look to avoid regression and keep Royals fans crying in their Oklahoma Joe's. And the 39-year-old Molina will give the hardcore sabermetrician insight into how pitch framing ages.

But if Tampa Bay is going to return to the postseason for the fourth time in five years, the onus will be on their young starting rotation. All five projected starters -- David Price, Alex Cobb, Matt Moore, Chris Archer, and Jake Odorizzi -- are under 30, and all but Price are under club control through at least 2017. With bats like Longoria, Myers, and Ben Zobrist, the Rays offense will have some serious firepower, but 76 games against the explosive AL East offenses will test any young rotation.

Prospect hounds are especially excited about Archer and Odorizzi. Archer (acquired from the Cubs in the Matt Garza deal) posted an 85 ERA- in 23 starts last season and boasts an above-average fastball and slider, while Odorizzi (acquired from the Royals in the James Shields trade) was named the Rays' best prospect by Baseball America and second-best prospect by Baseball Prospectus. If either young starter falters, the Rays will turn to Enny Romero or Alex Colome, two more top prospects slated to start the season in Triple-A Durham.

But the future is less rosy for the front of the Rays' rotation. Price has only one year of arbitration eligibility left (he signed a one-year, $14 million deal this offseason) and seems poised to hit the free-agent market after the 2015 season. And given the Matt Garza and James Shields trades, rumors have been swirling all winter that the Rays will trade their ace southpaw to restock their farm system.

Rays by the Numbers

35.9 and 23.3: The career framing runs by Molina and Hanigan, respectively, per 7,000 chances. Many pixels have been spilled on Molina's pitch framing exploits over the last couple of seasons; Harry Pavlidis and Dan Brooks' recent Baseball Prospectus article on the topic just put a number on that skill set. It happened to be a large number.

If we assume that their framing success rate is similar in 2014, that means the Rays can expect to get an extra two or three wins above replacement out of their backstops. FanGraphs projects the Rays' catchers to produce 2.5 fWAR in 2014, good for 23rd in the majors. Add in two or three wins for pitch framing and they jump to second, behind Buster Posey's Giants.

The AL East will be a meat-grinder once again, but someone has to win the division. The Red Sox's rotation is shaky and the Yankees' lineup isn't what it used to be, so that's why I'm casting my lot with Tampa Bay to win the division at 89-73. Even as prospect writers are starting to question where the next wave of cheap young talent will come from, the current edition of the Rays is full of talented young players with major-league success who have already tasted the playoffs. As always, it will be tough to sleep on Maddon's squad in 2014.

All statistics courtesy of FanGraphs and Baseball-Reference. Roster and contract information courtesy of MLB Depth Charts.

Bryan Cole is a featured writer at Beyond the Box Score. He likes to hide a Joe Maddon gnome around the house to freak out his wife. You can follow him on Twitter at @Doctor_Bryan.