The trade: an analysis

Are trades a dying breed, and were they ever as prevalent as commonly thought?

Share All sharing options for: The trade: an analysis

As the Chicago White Sox enter the 2014 season, they appear to have an overabundance of middle infielders. They'll likely start the season with Gordon Beckham at second, Alexei Ramirez at short and Jeff Keppinger as a utility infielder. By using three roster spots on first base/designated hitters Jose Abreu, Adam Dunn and Paul Konerko, they've limited their ability to keep young talent like Marcus Semien, Micah Johnson or Leury Garcia on their Opening Day roster.

The obvious solution to every beat reporter, columnist, on-air personality and fantasy baseball player is to make a trade. There have to be teams needing an excellent fielding second baseman like Beckham or a steady shortstop like Ramirez willing to give up some talent (preferably at catcher) in exchange.

This chart is from data at Baseball-Reference.com and shows the number of trades made per year since 1998: 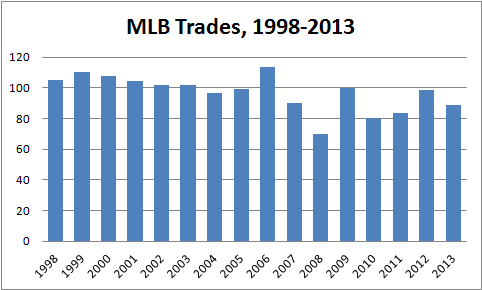 These are trades only—no purchases or waiver claims. At least one player had to have spent some time in the major leagues, so if a deal was made in 1999 in which one minor leaguer was exchanged for another, that transaction is not included.

So which is more common, the blockbuster trade like the one moving Prince Fielder (and his big contract) to the Rangers for Ian Kinsler, or deals like the trade moving Alfonso Soriano to the Yankees for minor leaguer Corey Black?

I stratified trades into three different types, using completely subjective standards. The first type of deal is exemplified by a three-team deal at the 2013 trade deadline:

There were three major leaguers: Peavy the starter to fortify the Red Sox rotation, Iglesias the shortstop who filled the hole Jhonny Peralta's suspension created and Garcia the hot young prospect the White Sox needed for the future. For 2013 I counted seven trades like this, including the Fielder-Kinsler trade

The second type involves trades of veterans for prospects, such as the Soriano deal and this one at the beginning of the 2013 season:

This deal had the primary benefit of getting Wells off the Angels' roster. They still paid him significant money, $28 million of the $42 million owed through 2014, but at least he's not taking up a roster spot. By my count, there were 11 such deals in 2013.

The last type of trade is the "eh-for-eh," where teams exchange veteran surplus parts:

7/2/2013--The Chicago Cubs traded Carlos Marmol and cash to the Los Angeles Dodgers for Matt Guerrier.

Seven trades involved established players, 11 were essentially salary dumps and three others swapped surplus parts—21 of the 89 trades got our attention—what's left? Deals like this:

Rzepczynski is a LOOGY (more accurately, a left-handed one inning guy, or LOIGY—in 38 games in 2013 he pitched 30.2 innings and faced 129 batters) who pitched well for the Indians as they made their playoff run, and Herrera is a shortstop who isn't even in the Cardinals' spring training camp.

Using my four categories, this is how I subjectively stratified the trades since 2000:

Has the incidence of trades decreased over time? This chart shows the average number of trades per team since 1960: 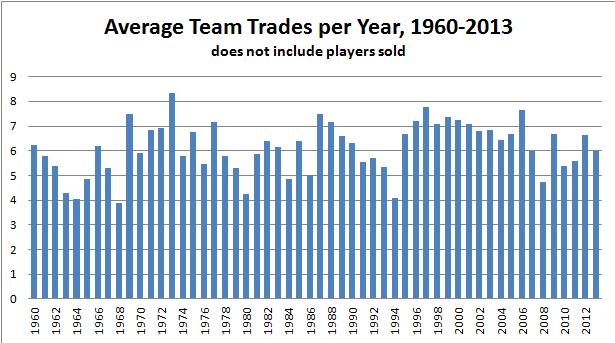 Some teams trade more than others—for example, from 2000-2013 the Red Sox and Padres were each part of 123 trades, whereas the Twins and Angels only 51. But on the whole, the typical team participates in six to seven trades a year.

Jose Iglesias is out indefinitely at shortstop for the Tigers with stress fractures to both shins—looks like the perfect opportunity for the signing of Stephen Drew or . . . an intra-division trade with the White Sox for Alexei Ramirez! Neither are likely, and a trade for Ramirez is remote at best because teams don't make deals like that anymore. As free agency drives the price of veteran players higher, the value of young talent under team control for up to six years is substantial and not cavalierly discarded for expensive replacements.

Trades still have a role, but it's debatable if they ever played the outsize role they do in a fan's imagination. For every deal like the Fielder-Kinsler one there are numerous smaller deals that don't resonate beyond the agate section of the sports page. Blockbuster deals still occur, but even my definition of blockbuster includes trades like the Rockies' Dexter Fowler for the Astros' Brandon Barnes and Jordan Lyles—it doesn't exactly set the heart aflutter. As long as there is web columnist, newsprint and broadcast time to fill, there will always be trade talk—it just won't be anywhere near in proportion to the number of big trades that actually occur.

All data adapted from Baseball-Reference.com