We often think of pitchers who have good control and limit walks as ones who throw tons of pitches inside the zone. But, as the contrast between Cliff Lee and Hiroki Kuroda shows, that isn't always the case.

Throwing strikes and limiting walks are two essential objectives for any pitcher. Indeed, the old adage "walks will kill you" has been a favorite of pitching coaches from little league up to the majors for years, signifying how vital a pitcher’s control is to his overall success. To get hitters out, conventional wisdom preaches, you have to throw the ball in the strike zone.

Pitching (and hitting) backwards in 2013

Pitching (and hitting) backwards in 2013

Both Cliff Lee and Hiroki Kuroda are known for their impeccable control and ability to avoid the free pass. Lee might just have the best control of any major league hurler; he owns a career 1.96 BB/9 rate and, as he did last September when he walked just one batter in 39 innings, goes through frequent stretches in which he hardly ever surrenders a walk.

Kuroda is no slouch in this department either. The right-hander has reduced his walk rate in each of the past three seasons, posting an impressive 5.2% BB% in 2013, which more than made up for his pedestrian strikeout numbers. Among all major league starters, Kuroda and Lee are two of the best at limiting walks, with Lee ranking first overall in BB% (3.7%) and Kuroda coming in at 14th last season.

Yet the two pitchers go about their craft in vastly different ways, calling into question the customary belief that throwing pitches in the strike zone and preventing walks go hand in hand. Lee posted the second-highest Zone% (which measures the overall percentage of pitches a pitcher throws in the strike zone) of any big league pitcher in 2013 at 56.9%. Kuroda, on the other hand, was tied for the third-lowest Zone% in MLB at 44.1%.

How could two pitchers, both of whom rarely give up walks, have such a different approach to throwing strikes? More importantly, perhaps, how does Kuroda throw so few pitches in the strike zone, but still avoid the free pass?

In many ways, Kuroda isn’t your typical pitcher, even if he has been one of baseball’s most consistent starters over the last few years. His pitches always have movement and often dart and dip below the strike zone, as the 39-year-old’s zone chart shows: 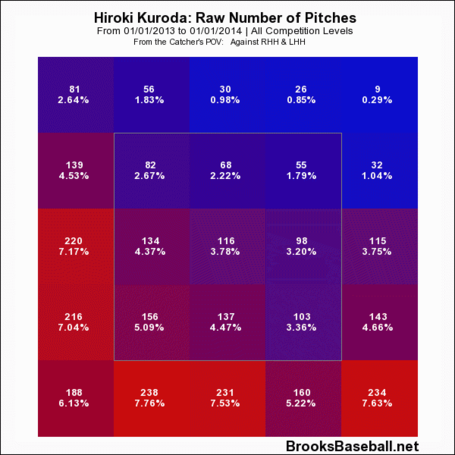 Kuroda lives just outside the strike zone, with his slider and splitter getting frequent whiffs as they move down and away from the plate. The Japan native’s most-used pitch, his sinker, also has tons of movement, leading to swings and weak contact on pitches off the plate.

And, ultimately, this is how Kuroda has been so successful. He generates swings (and often misses) on pitches outside the zone, as his 34.9% O-Swing% indicates.

Kuroda isn’t alone in this—among the pitchers with the lowest Zone% in 2013, many had high walk totals, but a few (like Zack Greinke and Felix Hernandez) also garnered swings and misses on pitches outside the zone.

When compared to Kuroda, Lee’s zone chart demonstrates how often he lives inside the zone: 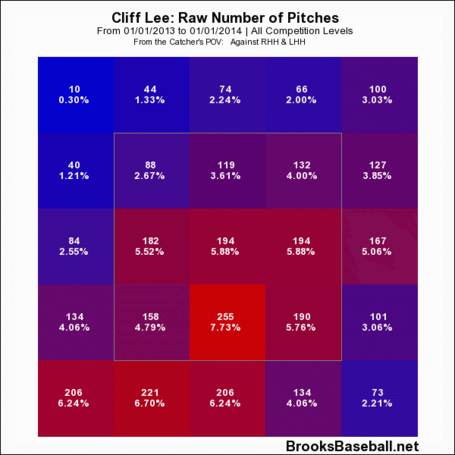 Lee is a unique pitcher. He doesn’t do anything spectacularly well, but he garners whiffs, produces ground balls, and strands runners at an above-average rate. Most importantly, he is remarkably durable, having thrown at least 210 innings for six straight seasons.

He uses a four-pitch mix, relying heavily on his sinker and cutter in 2013, and is able to place his pitches on the outside edges of the zone. Again, nothing particularly stands out about his pitches, though all are above average and do a decent job of creating weak contact. Lee’s success, then, comes from getting himself into favorable counts and forcing hitters to swing at pitches that are too close to take, while also picking up just enough strikeouts to get by.

There is nothing flashy about Lee (which is why he can be so underappreciated), yet the left-hander has found a formula that brings consistent results. He finds success through rarely falling behind in the count and executing his pitches to near-perfection, an approach that any pitching coach would try to instill in their pupils. That Lee can still excel while throwing so many pitches in the zone is a testament to how sharp his control and steady his execution truly is.

Ultimately, the contrast between Lee and Kuroda teaches us how nuanced pitching and a pitcher’s success on the mound can be. In other words, our conception of a pitcher with good control as someone who throws a lot of strikes isn’t entirely accurate. Limiting walks isn’t so simple as throwing pitches in the strike zone, especially when big league hitters will punish any pitch that catches too much of the plate. Unless you are someone like Lee, who can spot his pitches at an elite level, you need to generate strikes outside the zone in a consistent manner.

Kuroda has done that increasingly well during his time in the majors, which has enabled him to remain successful even as his strikeout rate has decreased. The right-handed hurler throws more pitches outside the strike zone than in, but that hasn’t stopped him from avoiding walks in the process.

Alex Skillin is a writer and editor at Beyond the Box Score and also contributes to SB Nation MLB. He writes, mostly about baseball and basketball, at a few other places across the Internet. You can follow him on Twitter at @AlexSkillin.