What counts as a pitch count?

You can't watch a baseball game without hearing the words "pitch count," but very little emphasis is placed upon pitches thrown across an entire career. Can we find anything meaningful in the data?

Share All sharing options for: What counts as a pitch count?

With the emphasis placed on pitch count it's surprising to find no consistent definition of what it is. In addition, there isn't much value given to career pitches thrown, or what constitutes a career pitch. When does the count begin--Little League ball, high school, college, minors? Does it matter only to starters? Do playoff pitches count, as well as spring training? Are days throwing when the pitcher isn't in the game taken into account? In other words, if pitch count serves as some manner of clock, when does the clock start marking time?

Accurate pitch data is available at Baseball-Reference.com going back to 1988, so I looked for pitchers whose careers began in 1988 or later, eliminating players like Roger Clemens and Greg Maddux who threw over 50,000 pitches but had careers beginning before 1988. It includes current pitchers like Madison Bumgarner and Jordan Zimmermann who are still early enough in their careers to have not thrown a large number of pitches.

This chart shows the number of pitchers by cumulative pitches thrown: 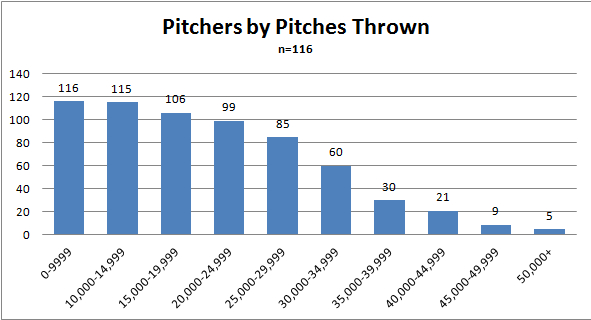 This includes only regular season pitches. The gradual dropoff seen at 15,000 and 20,000 pitches reflects the younger pitchers like Bumgarner, Derek Holland and Doug Fister who are still mid-career.

To add some perspective, league leaders in pitches face around 1,000 batters and throw around 4,000 pitches a year, so to reach 20,000 pitches in a career takes around five years or so. The gradual slide at 25,000 pitches also includes current pitchers, but the drop at 30,000 pitches is real. Somewhere between 25,000 and 30,000 pitches, the workload begins to take its toll.

In the NFL running backs hit a wall at age 30 and see their production plummet precipitously. However, as more players enter the draft early (and early is a relative term, since it's generally only one year earlier than if they played all four years), the number of rush attempts can be a better predictor of when production will begin to decrease.

In baseball, the age range can be much wider, and it was the pitch count for Felix Hernandez that initially drew me to investigate this. Felix Hernandez was pitching for the Mariners when he was 19, whereas pitchers like Cliff Lee and Jake Westbrook didn't become regular starters until 25. Westbrook and Matt Cain have thrown almost the same number of career pitches and are seven years apart in age--should this be taken into account when projecting Cain's future production?

I'm sure the more advanced teams take these factors into account when determining where on the aging curve their pitchers are. I also purposely didn't include pitchers like Yu Darvish, Hisashi Iwakuma and Hiroki Kuroda because I have no good way of determining how many pitches they threw in Japan, and the same holds true for Cuban pitchers as well.

It becomes extremely important when evaluating pitchers as they approach their 30s. As Ervin Santana continues to seek a new contract, I wonder which number is giving teams bigger pause--his age or the number of pitches he's thrown. Neither seem too excessive, and using the model developed by FanGraph's Dave Cameron, Santana would be worthy of a 3-year, $35 million deal, which, as Cameron mentions in his post, is very close to what his best offer seemed to be.

Who were those five pitchers who managed to throw over 50,000 pitches? John Smoltz, Livan Hernandez, Randy Johnson, Andy Pettitte and Mike Mussina, four likely Hall of Famers and Hernandez who did something underappreciated by taking the mound every fifth day. His career record was 178-177, for those who care (I don't) and an ERA+ of 95, more a sign of pitching for bad teams than anything else.

It makes no sense to fret over pitch count in an individual game and ignore it over a career. Other proxy measures like games started, innings pitched or batters faced can give the same approximate information but even those are rarely mentioned as opposed to mentioning a player's age. Not all pitchers progress or are used in the same manner, making it very important to see not only how old a pitcher is, but how much he's been used. If there are a finite number of pitches in each pitcher's arm, it makes sense to know just how close to the limit a pitcher is.

All data from Baseball-Reference.com