Tony Cingrani and dominating with the four-seam fastball

Big league starters generally need at least two, and often three, good pitches to succeed in the major leagues. But Reds left-hander Tony Cingrani baffled MLB hitters with largely one pitch—a four-seam fastball—during his rookie campaign. Can he keep it up?

Share All sharing options for: Tony Cingrani and dominating with the four-seam fastball

Perhaps the single most important attribute that separates a successful major league starter from a reliever is the number of effective pitches that pitcher throws. Starters generally have at least two, and often three (or, in the case of Yu Darvish, six), quality pitches in their arsenal, while relievers rarely get by with more than two dependable pitches. Just how many solid offerings a pitcher has, then, is frequently a determining factor in whether he makes his living starting games or coming out of the bullpen.

This time-tested reality is what makes Reds starter Tony Cingrani so unique. Cingrani’s impressive stats and effectiveness during his rookie campaign belie what was an unusual means of attack for a major league starter. The 24-year-old threw a four-seam fastball 81.5% of the time in 2013, a higher mark than every other starter in baseball except for Bartolo Colon. Cingrani’s next most-frequent pitch was his changeup, which he threw in just 6.8% of his offerings last year.

Yet Cingrani finished with a 2.92 ERA over 104.2 innings, making 18 starts for the Reds in the process and posting a 28.6% strikeout rate, the highest among any rookie who threw at least 100 innings. The left-hander also compiled a 3.49 xFIP and a lowly .192 batting average against, generating weak contact and whiffs on a consistent basis during his inaugural big league season.

How did Cingrani excel in the majors despite such an unvarying approach against opposing hitters? How did he depend—and succeed—upon a fastball that averaged a relatively commonplace 91.8 mph in 2013?

According to Baseball Prospectus’ Pitchf/x leaderboards, Cingrani’s four-seamer averaged 7.8 inches in horizontal movement last season. That mark ranked sixth-best among starters who threw the pitch at least 500 times. The movement on Cingrani’s fastball helped him post a 25.1% whiff/swing percentage on the pitch, the seventh-highest mark in baseball among starting pitchers.

The extreme movement on Cingrani’s four-seamer led to his dominance in the upper portion of the strike zone, with the left-hander frequently getting hitters to chase his fastball up and out of the zone. The zone chart below demonstrates how Cingrani generated the vast majority of his whiffs on pitches well above the belt: 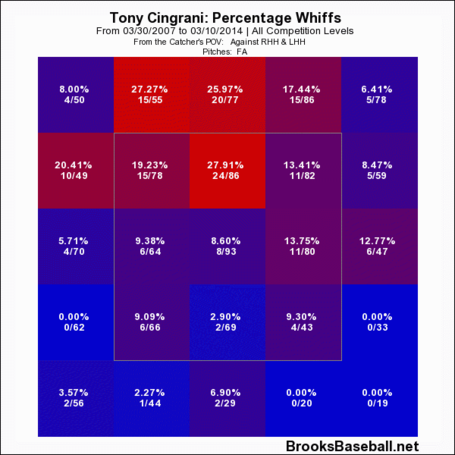 Cingrani’s willingness to attack hitters with his fastball up was also on display in an August start against the Brewers in which Cingrani struck out nine batters over 6.1 innings. As the video shows, Cingrani’s four-seamer has a tendency to dart up and away to right-handed hitters, who rarely appear to see the ball well out of Cingrani’s hand despite the frequency with which he throws the pitch:

Cingrani’s success with the four-seamer came in a different manner than the strong performances of Colon and Shelby Miller, who both leaned on the fastball heavily last season as well. Whereas Cingrani threw his fastball up in the zone with regularity, Colon instead relied on pinpoint control and attacked the outside corners of the strike zone. 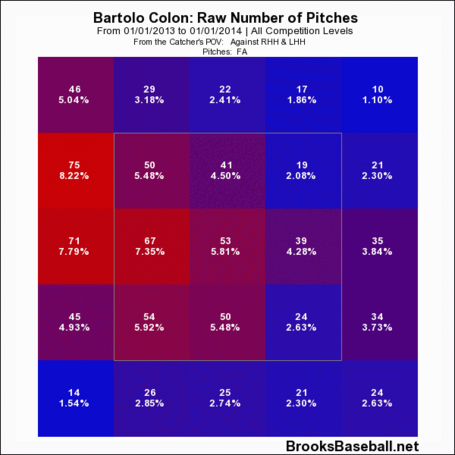 In addition, Colon’s four-seamer featured heavy vertical movement (rather than the high horizontal movement that Cingrani’s has), with Colon picking up more ground balls and weak contact than strikeouts with the offering.

Like Cingrani, Miller was unafraid to attack the upper portions of the zone, often garnering whiffs with his over-powering four-seamer: 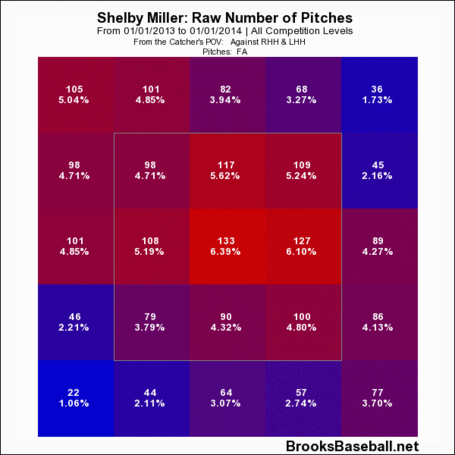 But Miller’s fastball averaged 93.6 mph (nearly two more miler per hour than Cingrani’s), while the right-hander also had the luxury of depending on a strong curveball that enabled him to change speeds and alter hitter eye levels throughout the course of an at-bat and a game.

Heading into 2014, Cingrani’s ability to build on his rookie campaign will be a huge storyline for a Reds team battling for a playoff spot in the deep NL Central. Can Cingrani excel over the course of a full season with such a fastball-heavy approach? When hitters begin to adjust, what will Cingrani’s response be?

The answers to these questions will be pivotal for the Reds’ chances in the season ahead. Cingrani has shown his four-seam fastball can be highly effective, but can he really succeed in the majors without a second pitch to attack opposing hitters with?

Alex Skillin is a writer and editor at Beyond the Box Score and also contributes to SB Nation MLB. He writes, mostly about baseball and basketball, at a few other places across the Internet. You can follow him on Twitter at @AlexSkillin.