The fairness of the qualifying offer system

In the two offseasons since the qualifying offer system was put in place, a handful of players have been greatly impacted -- but that doesn't necessarily mean the consequences of QOs are unfair or unexpected.

Share All sharing options for: The fairness of the qualifying offer system

In the 2012-2013 offseason, qualifying offers were extended to a mere nine players. In the current offseason, that number swelled to thirteen. In all of those cases, the players to whom offers were extended declined the offer in hopes of a longer deal, or one with a higher average annual value. The general perception appears to be that the impact on a handful of these players -- particularly Kyle Lohse, Adam LaRoche, Kendrys Morales, and Stephen Drew -- has been both unfair and unexpected. But is that really the case?

The qualifying offer system was put in place as an alternative to the previous system of compensating teams for departing free agents. Before QOs, whether a team received a compensatory pick was a matter of the player's actual performance, as compared to his peers. The "problems" with that system were that it resulted in a significant number of compensatory picks, and that measuring players against their peers resulted in some odd player designations, especially with respect to relievers (like Juan Cruz in the 2008-2009 offseason).

Instead of using objective measures of past performance, the QO system uses a different method of valuing players -- dollars. In the past a team might have gotten a better return for an elite reliever than for a merely good starter. Now, compensation is roughly equal for all free agents for whom compensation is given, and whether or not compensation will be attached at all depends on a single factor: whether or not the team losing the free agent thinks it wise to extend a one-year offer at or above the average salary for the top 125 players (in terms of salary) for the previous season.

Is the impact on certain free agents truly "unexpected"?

The only way to know for sure whether the effects of the QO system on the markets for some players have been more significant than expected is to have participated in or witnessed the deliberations of both sides when the last Collective Bargaining Agreement was hammered out. But don't believe everything you hear about no one anticipating the QO system working out this way. It would have been strange if no one anticipated that the QO system would impact players differently, and both sides would have anticipated that salaries would rise, and that fewer compensation picks and the bonus pool system would increase the value of draft picks. It also seems that the QO system has hit its target: in a letter to clubs explaining the new CBA, Rob Manfred explained that he and others at MLB "anticipate[d] that between eight to ten players will be subject to compensation each year under the new system." That's pretty close to what happened, with 13 QO players this offseason and 9 the offseason before -- and it's pretty close to the same number of affected players under the previous regime, which saw 13 Type A free agents offered arbitration in 2011 and 14 in 2010 (only 7 of the 13 from 2011 actually required draft pick forfeiture).

Better to develop talent, or to buy it? Ubaldo Jimenez: for real?

The reason we keep hearing that the QO system has had unintended consequences is that it just so happens to be in parties' interests to play that up. MLB clubs have every incentive to throw up their hands and blame the system when it comes time to negotiate with free agents like Drew, Morales, or Ubaldo Jimenez.. It's a negotiation tactic, one that any team would be unwise not to take advantage of. The MLBPA also has an incentive to trump up the effect of the QO system on certain players: if the salary-depressing consequences felt by players like Lohse were more significant than anticipated, the MLBPA could argue that MLB should agree to "fix" it without forcing the MLBPA to trade something in return. As for the media -- it's only natural that with both clubs and player representatives playing up the effect of QOs, the media would follow. It may also true, after all -- if there was anything "unexpected" about the effect of QOs, it might be that few people anticipated that QOs would be panned so widely as unexpected or unfair.

Is the impact on certain free agents truly "unfair"?

If the measure of the fairness of QOs is whether it has affected some players more than others, then the QO system is absolutely unfair. But because first round draft picks cannot be divided into fractions, there has to be a cutoff somewhere. The cutoff will mean there is a greater impact on players nearer the cutoff than players who fall below it, or who are well above it -- but when thinking about the fairness of QOs, take care to remember that the Elias-based system was also technically unfair to some free agents in the same manner, and that with QOs, there's no way to game the system by acquiring players whose stars had fallen, but whose performance warranted compensation per the Elias metrics.

As for how much the 21 players were affected (Hiroki Kuroda has gotten a QO twice), we can't know what contract each player would have gotten under the Elias-based system, or if signing teams didn't have to give up picks at all. We can make some educated guesses, however, based on the timing of each player's signing. If we make the (questionable) assumption that players had good grasps of their own true values, and we assume that players tended to wait until late in the offseason if they didn't get an offer that matched their expectations, then the timing of each player's contract should give us some indication of whether their market was affected by QO status. Last offseason, 21 free agents signed contracts with AAVs of $10M or more. Here are the amount of those contracts, set off against the dates the deals were signed, per Baseball Reference: 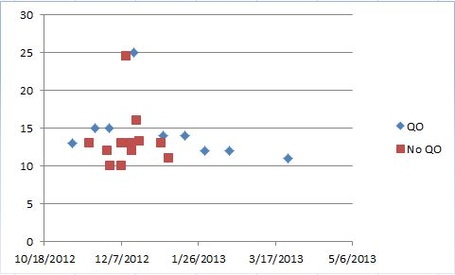 Based on signing dates, it looks like a few of the QO players settled for lower-than-expected deals: Adam LaRoche, Michael Bourn, and Kyle Lohse. The other six QO players fit neatly into the group of other free agents, showing no discernible pattern. This is something we can revisit after the remaining QO players in this free agent class (Nelson Cruz, Stephen Drew, Ubaldo Jimenez, Kendrys Morales, and Ervin Santana) are signed.

The trick here is that if teams were to place a particular value on the first pick they stand to lose by signing a QO free agent, that value will be static, regardless of whether the player is the best free agent in the class or one who just made the QO cutoff in the eyes of the player's previous team. Let's call it $10M. That amount constitutes a much higher percentage of a $13M AAV player's salary than it would a $24.5M AAV player's salary. The fact that marquee free agents tend to be signed for more years also makes a lost draft pick less of a drag on a marquee player's bottom line, on a percentage basis. It's possible that Josh Hamilton might have made $135M over five years but for the QO, which would mean his AAV was reduced by about 7.5% ($27M AAV to $25M AAV). If Kyle Lohse would have been in line for a 3 year, $43M deal, however, his salary was affected much more on a percentage basis (23%, from $14.3M to $11M). If that is indeed how the QO works, there is a disproportionately large effect on players closer to the QO cutoff.

Should the QO system be changed?

Scott Boras has been an outspoken critic of the QO system (which doesn't necessarily have to do with representing 7 of the 21 affected free agents), particularly as it has combined with draft pools. Boras's principal problem with it appears to be that it "does not reward performance" (last year) and that it compensates players on "the basis of classification" instead. He's right, of course -- but that doesn't necessarily mean that the compensation system must be changed. Free agency itself is subject to collective bargaining (what would the MLBPA do with an offer of $10M for every MLB player, but no free agency?), and the number of affected players have been similar to the numbers from 2010 and 2011.

But any system that were to "reward performance" would need to not punish teams that sign free agents at all, which seems to be a radical idea. If some impact on the signing team is desired for at least some free agents and a tax is not palatable, then forfeiture of draft picks would seem to be necessary. Compensation draft picks have more importance now than they did under the previous system because of draft pools (it certainly can't mean less), but there are no easy alternatives.

What do you think? Is the QO system fair? If you'd prefer to see it changed, how would you change it?

Ryan P. Morrison is a Beyond the Box Score contributor, and co-author of Inside the 'Zona, a site on the Arizona Diamondbacks with a sabermetrics slant. You can follow him on Twitter: @InsidetheZona.