Max Scherzer took the baseball world by storm as he was arguably the best pitcher in the American League last year. His rise to the top of the league however started in 2012, when he began tinkering with his approach and found a few keys to sustained success.

Yesterday, Dave Cameron wrote about the five pitchers who are looking at big paydays through either via extension or free agency after this season over on Fangraphs. Headlining that group was Cy Young winner Max Scherzer, who broke out this past season as an ace for Detroit. Dave suggested that Scherzer was in line for a $25MM per year payday, with an extension of 7/$167MM in the realm of possiblility. To understand how Scherzer got here, on the doorstep of a massive payday, we need some history.

As a full time starting pitcher Max Scherzer has posted solid fWARs in every season of his big league career. From 2009 to 2011, Scherzer put up an average of just over 3.1 fWAR while throwing an average of 187 innings per season. 2012 though, was a different animal, as Scherzer posted 4.6 fWAR, a 48% improvement over his average from the preceding three seasons.

What did Scherzer do differently in 2012 than the previous three seasons? Well, he expanded his repertoire, but not in any significant way. Scherzer was basically a three pitch pitcher using a fastball, slider, changeup combination. Scherzer began integrating a sinker and curveball into his pitch mix, albeit at very very low usage rates. Throughout the 2012 season he threw roughly one sinker per start, and two curveballs per start. These three pitches likely didn't make an impact large enough to improve his performance that significantly, but it does signify the beginning of his tinkering.

Looking at Scherzer's stats, you'll notice something interesting about that 2012 season in question. His strikeout rate went up from about 8 strikeouts per 9 innings, to over 11! On the same token, his GB% dropped about 4%, so it seems that there is likely something bigger behind this surge in performance.

The first thing I checked was if he started pounding the strikezone more often, and that's why he was seeing elevated K rates and lower groundball rates. His zone% though, the percentage of pitches he throws in the strikezone, has actually been lower over the past two seasons than it was earlier in his career. That said, opposing hitters are making contact between 4% and 5% less than they did pre-2012, so there's clearly something going on here.

Scherzer's solid 2012 season paved the way for 2013, where two interesting changes became much more clear. Scherzer ditched the sinker, but threw his curveball much more frequently. In fact, he ended up throwing his curveball between 9 and 10 times a game, roughly 5 times more frequently than he did in 2012. He also more obviously pitched exclusively outside to batters, something that changed from earlier in his career. This held true for both left-handed batters and righties, as Scherzer almost exclusively pitched away for much of the season last year.

Below are zone profiles from Brooks Baseball show how Scherzer's approach to right-handed batters changed from 2011 to 2013. It's clear that he is living on the outside corner much more now, especially the bottom right portion of the zone. 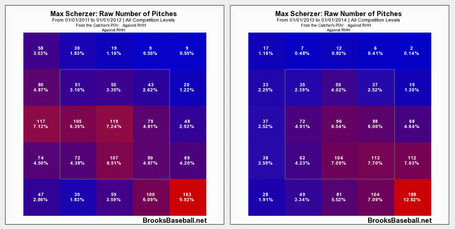 In fact, looking at the numbers we can see how extreme this change in approach has been. The nine sectors in the bottom right portion of the zone (dead center to bottom-most right corner) is essentially the low and away portion of the zone to all righties. In 2011, 50.15% of Scherzer's pitches to right-handers ended up in this portion of the zone. For 2013, this number jumped up to 65.03%. That's an extreme increase, and it showcases how most of those pitches on the left side of the zone in 2011 are now low and away.

Scherzer already had very good stuff, and now that he's being more diligent in attacking the outside corners of the zone, he's been able to induce weaker contact and more Ks. Scherzer was never a big ground ball guy, and he's seemingly embraced that by aiming to strike more batters out now. 2013 saw Scherzer post a career low BABIP and home run rate, both stats that are likely to regress to the mean in subsequent years. However, his new approach has likely played a role in his ability to strike batters out and induce weaker contact.

Beyond that, Scherzer isn't a terribly interesting study for PITCHf/x enthusiasts. His pitch usage doesn't vary significantly based on count or whether or not there are runners in scoring position. He hasn't had a significant change in release point or velocity.

What Scherzer has seemingly done is given himself the best chance at success given the tools he has. It's a simple approach, and it's an effective one.