A 40-year old Ichiro has to have slowed down some since his debut in the majors. But how has this affected ability to reach on infield and bunt hits?

The infield hit has been talked about recently here at Beyond the Box Score. Just a few dasy ago, Nick Ashbourne discussed how Ichiro has lost his crown as the infield hit king. Now, Ichiro has historically been one of the best at exceeding expectations in the “stealing first" department. I looked at this prior to the 2013 season, when Ichiro had 7 of the top 25 seasons for Batting Average minus Expected Average (Calculated as if Ichiro reached a league-average percentage of times on infield hit opportunities).

If you had to choose how to build your team, would you choose money or a strong farm system. Jeff Wiser looks at the question in detail.

Again, this will be looked at through the lens of batting average minus expected average described in the linked article. This allows us to take some yearly league variation into account. So, after calculating the difference for each Player-Season with more than 200 PAs, we have the following plot. 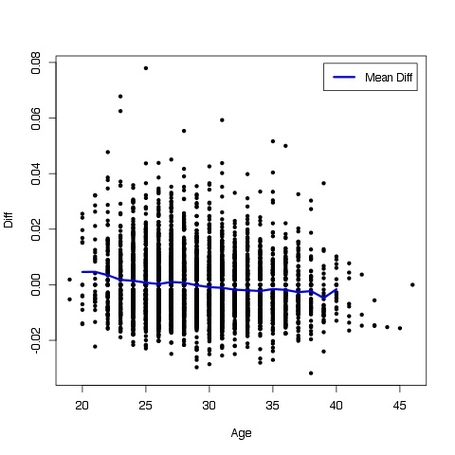 However, if we look at comparing player change from year to year, things look a little different. After we set the number of ABs, PAs, ground balls, bunts, and calculate the difference between real and expected average, we get the following. 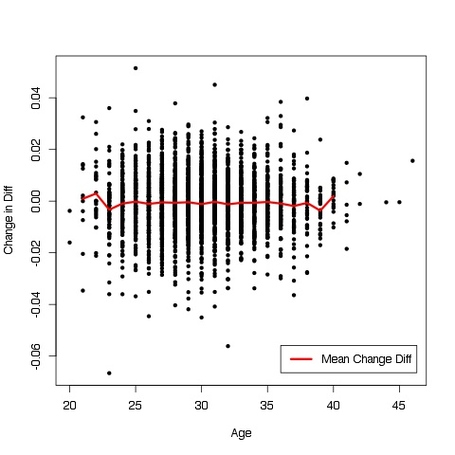 The average value of this change in Diff constantly hovers around 0. So how does the average Diff of the population decrease, while individual players show much less change once we've held AB, PA, GB, and BU constant?

One possible explanation is the seemingly slight increase in GB% as players age. From the same data set, looking at the change in GB%, there's a slight (And I do mean slight) upward trend. 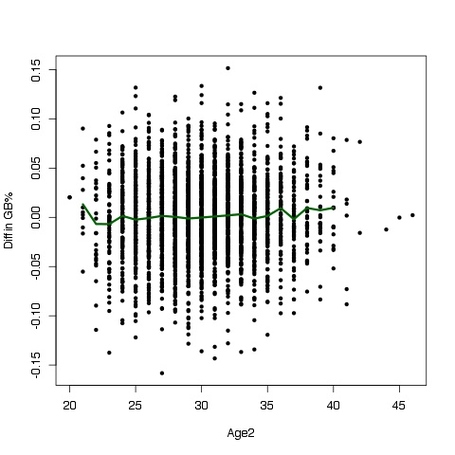 Now, this is just a small percentage difference on average, but over an average season of the data set, say 400 at bats, this can increase the number of GB by around four (Difference between an average age-29 and age-39 season). If you substitute in the league-average levels for IFH% and non-IFH% for both the age-29 and age-39 seasons, you would get a difference in Diff of 0.00314, which mirrors the actual difference in mean Diff (0.0046, from the table above) pretty nicely. This is not an entire explanation of course, but it might be a contributing factor.

There are of course many other extra factors to consider in how speed ages. There are many vast injury and bio-mechanical reasons that I don't understand and that could be difficult to include if I did understand. And of course, simple regression to the mean could explain a portion of this. However, it seems reasonable to say that, as a population, players beat out fewer ground balls as they age. Any definitive statement beyond that regarding causation would require some serious digging.