Have you ever wondered how often pitchers throw to first?

Share All sharing options for: Analyzing throws to first

Today, we enter a cruel time in the sports world with the Super Bowl over and baseball another two months away. The NBA and NHL are hitting the heart of their seasons, but for baseball fans, it's a tough slog to the end of another offseason. Just think, poor Harry Pavlidis of Baseball Prospectus was reduced to tweeting about the Caribbean World Series being shown on ESPN Deportes last night. It's been three months since the end of the World Series, spring training opens in a couple of weeks but even that is a cruel taunt for what's to come. We need baseball, and we need it now. Into that breach I step.

When I started amassing play-by-play data from Baseball-Reference a couple of years ago I noticed that in addition to typical inning and out information there was also pitch data, including two categories I've never seen presented before--throws to first (and second and third as well) and times a runner broke to steal a base. As I figured out ways to tease out this data, I became curious if there were any trends.

I'll begin with pitcher throws to first--this table shows data from the 2009-2013 regular seasons and pitchers with the most throws to first during that time: 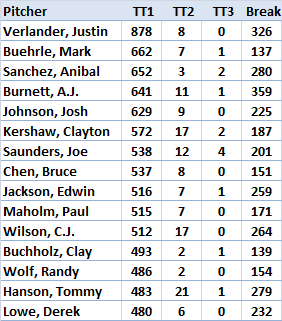 The table is sorted by throws to first and includes throws to second and third. The last column is the number of times a runner broke to steal any base and is shown just because I have the data and you likely haven't seen it before.

I don't state this as some previously unknown data only now brought to light, I just thought it was interesting to look at data rarely seen. There are any number of factors that explain these totals, such as the strength of the catcher's arm, the effectiveness of a pitcher's move to first, the handedness of the pitcher and batter, and the situation. It correlates loosely with pitchers who've allowed the most base runners in this time span, which in itself correlates with batters faced. I don't know if Justin Verlander is considered to have a good move to first--I do know Mark Buehrle does.

I'm confident in the pitcher data--the data on base runners is trickier because of the way Baseball-Reference formats play-by-play data. In other words, I had to make assumptions as to who the runner was actually was. This chart shows the number of times a runner caused a pitcher to throw to first, also from 2009-2013: 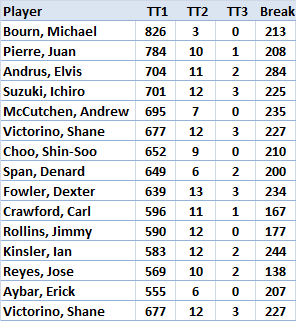 These are players who are active on the base paths, suggesting I collected and presented the data correctly. If I'd seen Paul Konerko or Prince Fielder on this list I'd be suspicious. Similar to the pitchers, this list also loosely correlates with the players with the most stolen bases during this time frame.

This last chart comes from a random comment made by Cubs TV play-by-play man Len Kasper, who said to his then-partner Bob Brenly with regard to Juan Pierre "I bet he's broken to second more than any player in baseball." I can't speak to that, but I can show the players who have broken to steal a base (any base) in the 2009-2013 time frame: 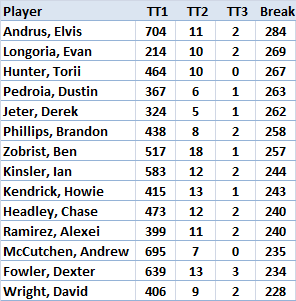 Pierre is reaching the end of his career and doesn't run like he used to. I suspect if I broadened the search (which is not going to happen, by the way) he would move higher up the list. I did my best to be sure to not include breaking with two outs and full counts. I'm not exactly sure Evan Longoria fits this mold, but again I did the best I could with the data to give accurate representations.

It's going to be below zero again in Iowa this week. I love baseball but not as much as many others, suggesting it must be even worse for them as we suffer through this miserable winter. Alas, hope does spring eternal (except for Cubs fans in 2014. Probably White Sox fans too). Sometimes I write to drill down through data looking for clues to performance, sometimes just because I find stuff others might find interesting. Not all data has deep meaning--sometimes it's just fun to see and check if it matches up with our experience. I don't claim Justin Verlander making the most throws to first is indicative of anything, just fun to know.

All data adapted from Baseball-Reference.com.