The Yankees locked up Brett Gardner as their left fielder for the foreseeable future. Gardner is not the typical left fielder, as he provides value with speed and defense rather than big power. Here is a look at this contract extension.

Share All sharing options for: Yankees lock up Brett Gardner

On Sunday, the Yankees signed Brett Gardner to a four year, $52 million extension. The contract does not start until after this season, so the Yankees have essentially given Gardner a free agent deal before he reached the free agent market. Include his 2014 salary of $5.6M, and the contract can be thought of as five years at $57.6 million. All told, the average annual value (AAV) of the contract is $11.5M, which is certainly reasonable for a player like Gardner.

The 30-year old Gardner will be the Yankees everyday left fielder, alongside new center field teammate Jacoby Ellsbury. Gardner is not your prototypical left fielder (hits in the middle of the lineup, hits home runs, with mediocre to poor defense). He is more of a well-rounded player with excellent speed and defense. He has 10 more career triples than home runs (33 to 23, respectively) and career 73.2 ultimate zone rating (UZR) as an outfielder. This is not to say that he is a poor hitter. Gardner has been an average contributor at the plate for his career, averaging 101 wRC+ and .329 wOBA.

Gardner is coming off a solid 2013 season, where he produced 3.2 fWAR in 145 games, which ranked him as the 20th best outfielder in the game, placing him amongst a group of excellent outfielders such as Denard Span, Alex Gordon, Desmond Jennings, Justin Upton and Austin Jackson. For 2014, ZiPS projects this group to produce at similar levels again:

By WAR, Gardner is expected to produce the least of the group, but this is driven by large discrepancies in playing time; Gardner is projected to get ~130-230 fewer PAs than these outfield counterparts. Yet, even at this projected production level, he would be slightly outperforming the market value of his contract, at ~$6M per win.

Gardner's best season came in 2010 (his age 26 season), when he produced 6.0 fWAR in 150 games as the Yankees primary left fielder. He followed that up with 4.9 fWAR in 159 games in 2011. His 2012 season was derailed because of an elbow injury, limiting him to only 16 games. His performance in 2013 (outlined above) suggests that he has returned strong from the injury. This new contract runs through Gardner's age 30 - 35 seasons, a period during which players typically decline significantly, a trend that is often thought to be even more dramatic for speed-and-defense players. This idea is predicated upon the thought that speed will decline quickly with age and once the speed is gone, these types of players become entirely ineffective. Therefore, questioning Gardner's ability to produce throughout the contract is relevant. The good news is that, as Jeff Zimmerman demonstrated, ‘fast guys' (i.e., those that had 25 or more stolen bases, and 8 or more triples; like Gardner) tend to decline differently from the average player, with their decline in runs above average (RAA) coming much later in the aging curve: 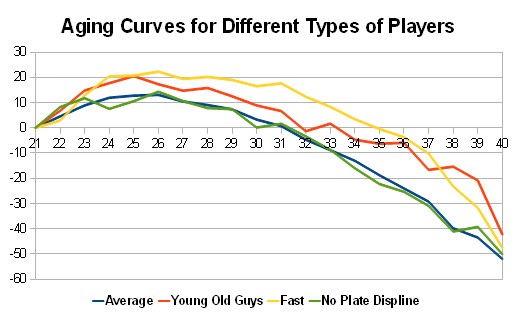 Given this informative trend, the Yankees can be reasonably confident that they will not be paying for years of negative performance from Gardner.

Overall, this looks like a solid contract for the Yankees and for Gardner. He is a player who will produce in multiple ways, improved as a hitter last year and as shown should age reasonably well. With him and Ellsbury under contract, two-thirds of the Yankee outfield is set for the next five years. Coupling Gardner with Ellsbury (another above average fielder: career 43.7 UZR) should be a formidable defensive force. Maybe this will give the Yankees front office time to focus on fixing the remarkable problems looming in their infield.