I learned how to amass large data sets around four years or so ago and immediately investigated what I thought would be a very simple question--at what age do pitchers reach their peak? I had a good idea what the answer would be (somewhere in the 27-30 range) and was curious to see if this changed over time to reflect better salaries, training, playing conditions or other factors.

Not exactly the chart I had in mind. In this case, I used FanGraphs data from 1988-2013 to find the average fWAR for pitchers by age. I thought I would see a gradual increase (pitchers getting better with more experience) followed by a decline as they reached 30 or so. Instead I saw what I have here, a gradual increase that...gets higher as pitchers age? Back to the drawing board.

Of course, smarter people that me already see what I did wrong and it only took me two years to figure it out. The average fWAR was relatively steady over time because if a pitcher was below average for more than a year or so, he was out of the major leagues and not contributing his sub-replacement level fWAR and dragging these numbers down.

Armed with this keen insight I'm sure someone realized ages ago I looked at the data differently:

That's more like it! This is a two-axis chart, with the left axis the total number of pitchers of a certain age and the right their total fWAR. For example, between 1988 and 2013 there were a total of 537 seasons pitched by pitchers who were 22, and the total fWAR was 327.9. In this time span pitchers join major league rosters around age 23-24, peak around 26 with a sustained decrease in numbers from 27 on that gradually flattens out a bit around age 35.

What are the dynamics of these curves? The data suggests teams give pitchers until around 26 or so to prove themselves, and if they don't, they move on to the next crop instead of paying older pitchers more money as they enter their arbitration and free agent years. Obviously, pitchers pitch for as long as they're performing well, but the data suggests that in total, the dropoff in performance begins around 27, a couple years earlier than I would have guessed.

There's probably something to be said about separating starting pitchers from relievers, but doing that introduces a bias of its own in that if pitchers can throw 200 innings with some measure of success they'll typically have a career longer than a middle reliever who is the 11th or 12th-best pitcher on a staff. Likewise, a successful closer will be given more leeway and could even work backwards into setup as well, so trying to stratify the pitchers by measures such as innings pitched, games started or others wouldn't do me any good. Having written that, this is the chart look for pitchers with at least 20 starts in a season: 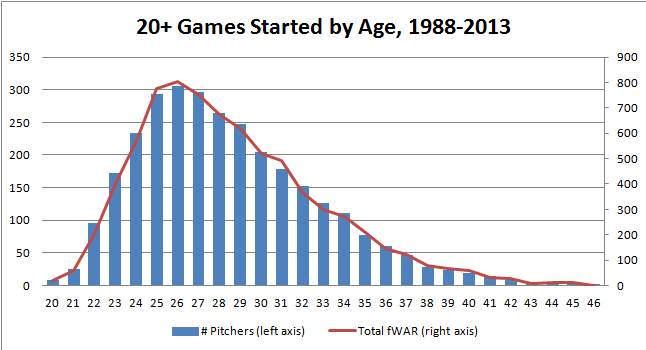 Look familiar? These are pitchers rightly called the best in baseball, pitchers effective enough to start at least 20 games in a season, and even they appear to decline around 28 or so. I was curious if I were to move the date back to 2000 to eliminate mid-career pitchers if these curves would change appreciably--any difference was subtle at best.

There are reasons why we don't always look at averages when viewing data--we get the false picture seen in the first chart, which is actually telling us something very different and important. The older a pitcher gets, the better he has to perform--there are allowances for growth and maturity in the early 20s, but by the time a pitcher is around 27 or so he better be performing. This is why the averages inch up in the very first chart, to reflect the successful pitchers who reach their 30s. The average increases because the bad pitchers are gone by then, leaving only the good.

The life of a pitcher is a harsh one, one predicated on success at an early age and maintained throughout a career. This explains why pitchers like Chris Sale and Clayton Kershaw were locked up when relatively young and others like Ervin Santana and James Shields are either allowed to walk or signed to short-term deals--the aging curve of a pitcher is fast and harsh, and those that defy it are current or soon-to-be Hall of Famers like Greg Maddux, Randy Johnson and Pedro Martinez.

I did a similar analysis with hitters in my former blog that I may replicate some day, and it showed similar results as pitchers. General managers have known this for some time, which is why locking up young talent like Starlin Castro, Anthony Rizzo, Evan Longoria, Joey Votto occurs and why Mike Trout will be inked to a long-term contract sooner rather than later.

It's a new day with pitchers--pitch hard, flame out young and leave a pretty fWAR. Those who beat the odds are amongst the best in history. As the aging charts show, the difference between solid careers and Hall of Fame ones are the pitchers that can defy Father Time from around 28 on and still deliver quality pitching.

All data from FanGraphs