Introducing a new metric -- Disc Rating -- that puts all of the individual categories of plate discipline into one overall rating.

Plate-discipline statistics, such as Z-Contact% and SwStr%, can be very insightful in determining abilities and tendencies of both hitters and pitchers. It is easy to find which players are best in one stat when looking at a group of players, just like any other metric. However, it can be frustrating to look at multiple plate-discipline stats at once and reach any solid conclusions. The stats could be more easily measured if they were displayed relative to the league, in a uniform manner.

Chris on training hitters to see the ball better

Chris on training hitters to see the ball better

If you aren't familiar with these plate-discipline stats, FanGraphs sheds some light to what they entail right here. It might be a good idea to brush up on some of the definitions before reading on.

For this week's article, I will be focusing solely on qualified hitters from 2013. This gives me 140 batters with which to work. I'll write about pitchers in next week's post, and eventually, dig into the history books of the data for both pitchers and hitters.

The first task is to make each stat more useable. I went about this in a pretty ordinary way, by finding the means and standard deviations to ultimately be able to calculate Z scores. By using Z scores for each plate-discipline statistic, each individual data point will be measured by its distance from the mean in a clean and consistent measure.

Some of the raw data is highlighted in the table below. It is noteworthy that the numbers in the table will not equal league averages for 2013; these numbers are calculated with the 140 qualified hitters. However, the difference is seemingly minuscule. The stats here indicate a more disciplined hitter than league average, likely because those who did not reach the qualification threshold are generally not as skilled (for example, pitcher at-bats would be included in the league average numbers). Z scores are simply calculated by using the formula "(x - mean)/st.dev)", with x representing the player's own percentage for that stat.

For hitters, a high O-Swing%, Z-Swing%, Swing%, F-Strike%, and SwStr% would indicate an overly aggressive approach, or being overmatched by opposing pitchers. In any case, the lower the number for each, the better. A hitter also wants to have a high O-Contact%, Z-Contact%, Contact%, and Zone%. Thus, with the use of Z scores, it should be easy to add or subtract the scores appropriately, and be left with an overall rating of how disciplined the hitter is.

This is better illustrated through examples. The next table shows the top 10 Disc Ratings, as well as the bottom 10. A negative Disc Rating indicates a more disciplined hitter.

Marco Scutaro easily led hitters in this Disc Rating metric. In 2013, Scutaro was one of four qualified hitters to walk more often than strike out; the other three being Norichika Aoki, Edwin Encarnacion, and Alberto Callaspo. Aoki ranks 6th in Disc Rating, and Callaspo slots in 8th. Encarnacion also had an above average Disc Rating of -3.97. Furthermore, you can peruse the entire spreadsheet here, but there is a second, improved spreadsheet, later on in this post.

Along with using data from previous years and doing a similar study for pitchers, further research would also have to include correlations. After some brief tinkering with the full spreadsheet (linked above), a strong relationship between Swinging Strike Percentage Z scores and Disc Rating became obvious. Here is that correlation: 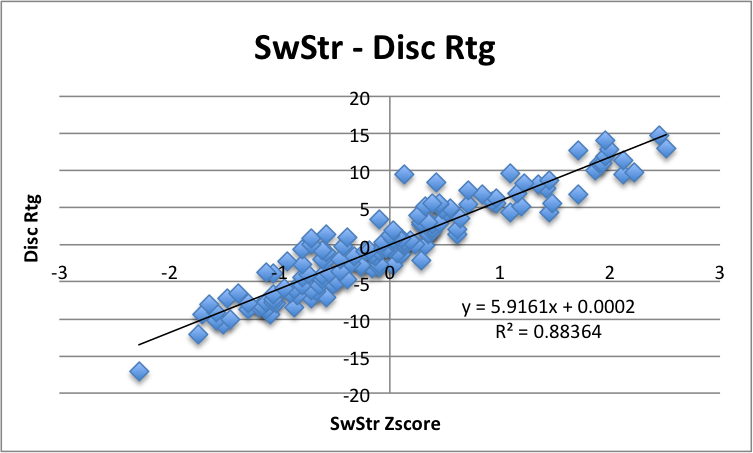 The relationship here shows that SwStr% is the plate-discipline stat that best individually describes a hitters ability to control the strike zone, as compared to the other eight stats. I went ahead and tested the R^2 of each individual stat to Disc Rating; the following table shows those relationships.

I then used each of these values as weights for each Z score. For example, Scutaro's -1.89 Z score for O-Swing% is multiplied by 0.44. After doing this for each Z score, I simply add (or subtract) the new weighted Z scores. Here is the new, terribly unreadable formula (Zsc = Z score value):

The new values are again centred around 0, but this time are all within a -10 to 10 range. For example, Marco Scutaro grades at -9.55, while Josh Hamilton finds himself at the bottom with an 8.62 Weighted Disc Rating. I've also ranked each player 1 through 140 for both the unweighted and weighted measure, and found the difference between the two. Denard Span jumps up from 14th to 7th best by the weighted metric, while Buster Posey and Dustin Pedroia both slip just outside of the top 10. Check out the new, improved spreadsheet, sorted by Weighted Disc Rating.

While my Discipline Rating statistic seems to do a decent job of judging overall discipline (at least, according to how I envisioned specific players grading out), I don't see a lot of correlations between Disc Rating and other offensive abilities. For example, there was next-to-no correlation between Weighted Disc Rating and wRC+.

Finally, I'll share one last spreadsheet showing Weighted Disc Rating for all hitters with at least 50 plate appearances. I left this until now because all of my calculations above were done without the unqualified players. Try to find Yasiel Puig!

Anyways, this is just a starting point for what should be a series of related articles in the near future. Please let me know where I went wrong, and share your thoughts!

*Also, I recently came across this article from Max Weinstein, which, somewhat disappointingly, is remarkably similar to the one that I have presented here. His method was a bit different, but his ratings from 2012 had Marco Scutaro with the best plate discipline and Josh Hamilton with the worst. It is worth the read.

Bryan Robinson is a Contributor at Beyond the Box Score. You can follow him on Twitter at @ProProjections.