Towards aging curves for umpires

PITCHf/x data and an investigation of umpires' ability to call balls and strikes as a function of age.

Share All sharing options for: Towards aging curves for umpires

Scott Lindholm's recent look at individual umpires in the PITCHf/x era made me wonder what umpires' seasonal numbers looked like. In this article, I'll look at how umpires have adjusted their strike zone in the presence of PITCHf/x tracking, and investigate how an umpire's performance changes as he ages. And although the data size is too small to establish a definitive relationship, we can see the start of an umpire aging curve.

More from Beyond The Box Score: Is Cliff Lee a Hall of Famer?

Before we get to that, though, we have to talk about the PITCHf/x database. The database, which is freely available from Baseball Heat Maps, contains data on the trajectory of nearly every pitch thrown in the Major Leagues since 2007. (A primer on the database can be found here, and a glossary of the attributes that describe each pitch is available here.) As useful as this information is, we will only be focusing on a very small subset for this article: namely, where the pitch crossed the plate, what the result of the pitch was, the approximate strike zone, the handedness of the batter, and the umpire behind home plate.

I next want to establish some ground rules for the remainder of the article. 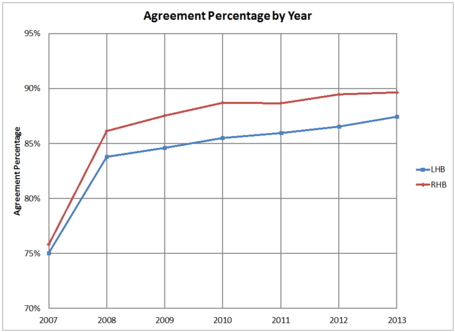 On to the data. We begin with the highest agreement percentages by season. Note that the best numbers are all from 2013 or 2012 and (at least for right-handers) were largely posted by older-than-average umpires.

The agreement percentages for RHB are higher since (as previously mentioned) LHB typically see more called strikes off the outer part of the plate, but our strict PITCHf/x interpretation labels these pitches balls.

The lowest agreement percentages, on the other hand, were all posted in 2007, the first year of PITCHf/x. In fairness, I should point out that PITCHf/x was not installed in every ballpark in 2007, so some data points from this season are missing. And as the first graph shows, umpires seem to have begun changing their calls in 2008 -- or PITCHf/x operators adjusted the calibration of their systems -- to improve agreement.

Interestingly, most of the umpires in these tables are younger than average.

I wanted to investigate umpire aging curves to see how agreement percentage changed as a function of age. There is a straightforward algorithm to do this for players, which I adapted for umpires. Ignoring each umpire's first season, I calculated the average change in agreement percentage relative to the previous season for all umpires at a given age. There are two problems with this analysis: first, there are far fewer umpires than MLB players (there were only 94 unique umpires in my 1,040-season sample); and second, there is a much wider age range for umpires than players (there are no 68-year-olds getting meaningful playing time). Between these two factors, there is too much noise to pull anything reliable from the data.

But as we look at these two graphs, we can see a very slight downward trend, as illustrated by the parabolic trendlines. As I said, it's not enough to draw a solid conclusion from, and it's possible that other factors are responsible -- perhaps, for example, older umpires were slower to adjust their calls to the feedback from PITCHf/x. Still, the results fit with our intuition (humans' eyesight gets worse with age) and I wouldn't be surprised to see a slow decrease in agreement with the PITCHf/x system stand out from the noise as more data is collected.

Bryan Cole's total lack of depth perception (among other things) ensures he will never be a Major League umpire. He is a featured writer on Beyond the Box Score, and can be found on Twitter at @Doctor_Bryan.