The value (or lack thereof) of stolen bases

How often does a stolen base directly lead to a run scored? The answer might surprise you.

Share All sharing options for: The value (or lack thereof) of stolen bases

Stolen base prevalence has waxed and waned over time. Baseball-Reference data shows the incidence of steal attempts from 1950-2013: 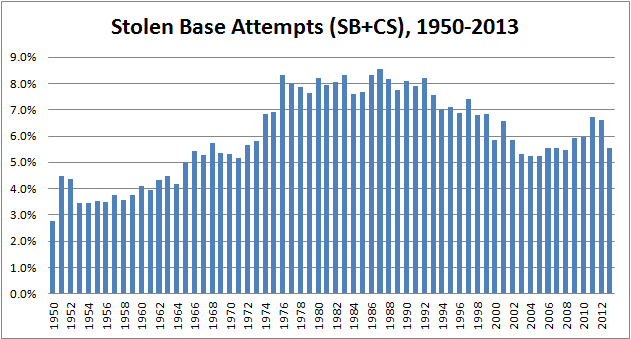 This chart shows the number of times teams either stole a base or were caught stealing as a percentage of opportunities, which B-R defines as "plate appearances through which a runner was on first or second with the next base open." In 2013 teams attempted to steal a base 5.5% of the time, a very significant drop from what appeared to be a brief stolen base renaissance in 2011-2012.

Smarter people than me can explain why the threshold of around a 70 percent success rate is necessary to justify stolen base attempts. "The Book" by Tom Tango, Mitchel Lichtman and Andrew Dolphin (available on Kindle or iTunes) provides explanation (Chapter 11: Running Wild) but the math isn't nearly as important as the logic. Tango's Run Expectancy Matrix shows two possibilities for a runner on first and zero outs (all numbers taken from the second table on the page):

With a runner on first, stealing second increases the odds of scoring a run by 19.6%. If he's thrown out, the odds of scoring a run decrease by 26.9%. This is entirely logical--a person can't steal a base when he's not on base, and more outs make it more difficult to score. Leaving aside all the factors that go into stealing a base (score of game, inning, pitcher, pitcher handedness, whether it's Paul Konerko or Michael Bourn on base, catcher, and more), it's a very clear distinction--the cost of being caught stealing exceeds the benefit of stealing.

With this background, I wanted to measure how often a stolen base directly led to a run scoring. My criteria:

I understand this is entirely retrospective, done with 100 percent hindsight. I need to make clear I'm not debating base stealing as an effective strategy as much as measuring how often it works. Argue amongst yourselves whether my criteria is fair, but it's what I chose. Here's how the data looks for the 2009-2013 seasons:

Steals of third are different since it's easier to bring the runner home with a hit, sacrifice fly, or productive out, depending on the number of outs in the inning, but the numbers don't increase dramatically. I show the steal attempts of home for informational purposes, noting attempts fell dramatically in 2013 for reasons I can't explain.

When the numbers suggest around 80% of stolen bases don't directly lead to a run being scored, the tendency is to paint with a broad brush and state "never steal," which is not even remotely close to what I'm suggesting. Down one run in the ninth with a right-handed pitcher on the mound and Rajai Davis on first with zero outs, it's a pretty safe bet what's going to happen. Turn that Tiger into Victor Martinez and the discussion is entirely different, probably even moot.

The proper use of Big Data in baseball isn't identifying macro trends and blithely dismissing strategies out of hand, but instead using it to influence the 5-10 games a year that come down to a game decision and seeing if the data can provide a competitive advantage or novel insight. With five teams making the playoffs in each league, the importance of even one game takes on additional significance, and it makes sense to see if time-honored strategies like base stealing actually translate into runs, and by extension wins.

Data adapted from play-by-play data at BBaseball-Reference.com and the Tangotiger Run Expectancy Matrix