In 2013, one team saw 3,000 more pitches than another -- the equivalent of over 20 games' worth of pitches. But does seeing a lot of pitches help a team win more games late in series?

Share All sharing options for: The effect of team P/PA on late-series winning percentage

Wearing down a pitching staff has advantages for a team's offensive squad. Hitters may accelerate their "times through the order penalty" (TTOP) benefit from seeing more pitches in early at bats. In addition, the more pitches a team's hitters can coax from a starting pitcher, the more likely they will get to face inferior middle relief pitching (although that benefit may be mitigated or eliminated by the TTOP). These advantages of racking up pitches per plate appearance (P/PA) may indeed help on a game-to-game basis, but I was surprised to find that team P/PA shows no real correlation with winning percentage (in 2013, the correlation coefficient was just .074, or .150 AL-only, .125 NL-only).

I set out, nonetheless, to see if the total number of pitches thrown to teams ("Pitches Seen"), or either of the two traits that fuel that number (OBP and P/PA), show a relationship with a team's success in subsequent games against the same team. If it's good to wear down an opposing team's pitching staff, it's probably better to have worn down an opposing team's pitching staff for a third consecutive day.

I tagged each 2013 game as either a game one or two of a series, or a game three or four (or five!). Contests that were game one or two of a series were put into the Game 1-2 bucket, and games that were the third, fourth or fifth consecutive games between teams were put into a Game 3+ bucket. I then calculated the surplus winning percentage for each team in the Game 3+ group, as opposed to the Game 1-2 group (W% Gm3+ minus W% Gm1-2). Here's a sortable table with that number, as well as each team's total Pitches Seen, P/PA, and OBP:

The results were not very impressive. Pitches Seen has only a very weak correlation with the surplus winning percentage for Game 3+ (.154). P/PA is only moderately stronger, with a .189 correlation. And it turns out that OBP has almost no relationship at all to winning more games in the Game 3+ group: OBP has a -.029 correlation coefficient, which is a bit like saying the relationship is chance, but with a lot of luck thrown in for good measure to keep it close to zero.

If I force a regression line into a scatter plot of pitches seen and surplus winning percentage for Game 3+, it at least slopes in the expected direction: 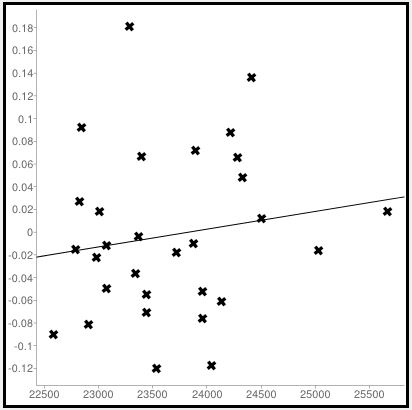 Frankly, there's just not much here. P/PA does not fare much better: 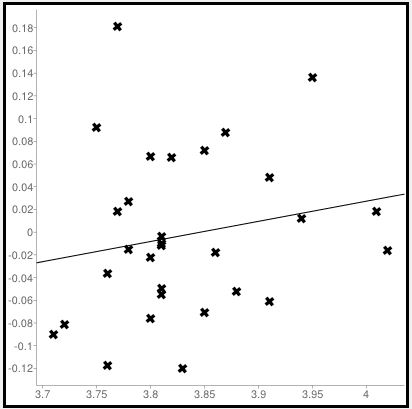 For some reason, this second scatter plot feels a little more meaningful, with a cluster in the lower left and the Cleveland Indians shining in the upper right like the North Star. There are no true outliers in the lower right, although we might have expected the Boston Red Sox and Minnesota Twins (all the way on the right) to show positive Game 3+ winning percentages. It's really just the San Francisco Giants (upper left) that make a mess of things. As noted above, there is only a weak .189 correlation between team P/PA and surplus Game 3+ winning percentage. If the Giants were removed, the correlation coefficient would have been .300 (still weak, but notable).

Best team in baseball: the team after the Red Sox

It seems that the Boston Red Sox did wear down their opponents by seeing many more pitches than the average team.

Hitting in deep counts Best team in baseball: the team after the Red Sox

The Giants are real, however, and the way things lie, this 2013 sample can't support any conclusions about Pitches Seen or P/PA and a team's ability to win games that come late in series. And even if the P/PA regression line is to be believed, we may be looking at an effect that can only be worth about 3 wins per season. Since the discrepancy is just for games that would be in the Games 3+ group, and since there are approximately 60 of those games for every team every year, a 0.05 difference in winning percentage (3.7 P/PA range to 4.0 P/PA range on the line) would be worth 3 wins (0.05 * 60). But, again, the correlation here isn't really a correlation at all.

I'm not shocked that the correlation is weak; hitting is only one-half of the battle, and Beyond the Box Score's Bryan Cole has already shown that there is essentially no carryover benefit to the pitching team from saving the bullpen. For that reason, a future analysis may pay better dividends if it measures a team's scoring in games 1-2 against its scoring for games 3+ (thanks to Bryan Cole for that suggestion with respect to an article last week). Another possibility would be to see if a carryover effect (either for the hitting team within a series, or a pitching team in general) is greater or lesser depending on the quality of bullpens. As for this particular analysis -- it would certainly benefit from the addition of other years' data into the set (volunteers are welcome). Note that further studies involving multiple years should be set against the mean, rather than a particular number; league P/PA has been rising steadily for some time.

So does team skill with P/PA make it more likely that the team will fare better as series progress? I don't think the results of this small study support that conclusion. It does seem unlikely, however, that the reverse proposition is true.