Splitting the difference: effects of left-right splits on closer save percentage

Trouble getting opposite hand hitters out can sometimes make or break a closer, or even relegate one to a career of setup duty. Does the lack of a platoon split make a good closer great?

Share All sharing options for: Splitting the difference: effects of left-right splits on closer save percentage

Sometimes the difference between a closer - and the accompanying perks of the role - and just another bullpen arm relegated to situational duties can be the ability to consistently and effectively get batters out, regardless of handedness. It's this subtle job requirement that finds sidearm and submarine pitchers often not cut out long term for getting the final three outs of the game. Even those with more traditional arm angles and deliveries can suffer from significant splits, which can inadvertently remove them from closing contention.

The premise of closers not being susceptible to significant left-right splits is smart from a tactical perspective, as it prevents the hitting team from loading up on pinch hitters that hit well against them. However, does it hold true? Do the more successful closers suffer less from platoon splits and are those with large splits doomed to roles where their shortcoming is less likely to be taken advantage of?

Let's look at this, using 2013 data and focusing on closers with 20 or more saves. Using 20 saves as the criteria, we can be confident that we are grabbing closers with a modicum of stability as to their placement in the closers role, and that they have been somewhat successful. From here, we will look at a couple of stats and compare the difference in results between lefty and righty hitters; for our analysis, we will look at the possible effects of wOBA, xFIP-FIP delta (E-F), and BABIP on save percentage, which we will use for our measure of success. For the table below, right split data was subtracted from left split data (hence the suffixes L-R); raw results are shown still including which direction the splits lie for a given stat.

Overall, we find a wide swath of differences between the given stat splits for closers with 20 or more saves, coinciding with a smaller but still remarkable swing between the best and worst save percentages.

Do we have a relationship between save percentage and severity of split for a given statistic?

Using the above data and applying Pearson's R correlation tests, we get the following:

Removing the platoon split direction and using just absolute differences for each stat in our correlations, we find that the disparities in left-right splits don't play as large a role in the overall success (as measured by save percentage) of a closer as one might expect. Looking at Pearson's R, we find the correlations to be essentially negligible, with none of them coming close to +/-0.3 or higher, which is the rule of thumb for a moderately strong relationship. P-values are also indicative of a relationship that is not statistically significant, with no results coming remotely close to the p > 0.05 cutoff for significance. Keeping platoon split direction information and re-running the correlations does not affect the results.

For those of a more visual persuasion, the scatterplots for each of these three correlations and their corresponding regression slopes are provided below, in the order found in the correlation table above: 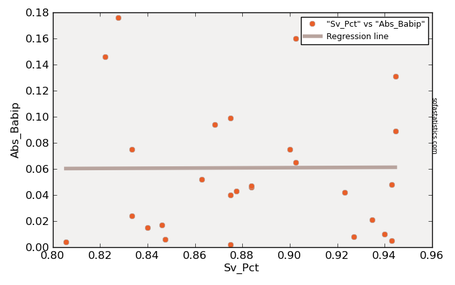 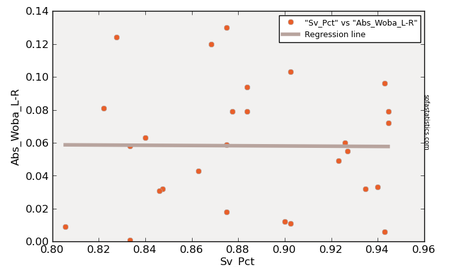 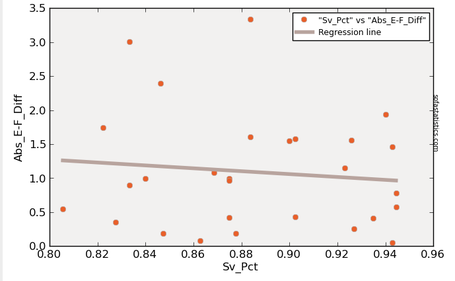 The strongest trend among the three statistics we picked was the one between E-F and save percentage, with the smaller disparities between expected FIP and FIP between lefty and righty hitters leading to improved save percentage. While these results aren't anything to hang your hat on, they do provide evidence that the notion of significant platoon splits keeping a talented arm out of the ninth inning might not hold water. While there are plenty of other variables to research, the selection of wOBA, FIP, and BABIP was done to provide a view with breadth more than depth, but one that considered factors in and out of a pitcher's hands. Overall, significant splits preventing capable dispatching of hitters on both sides of the plate will always be a concern when evaluating pitchers; however, its effect in the ninth inning and on those with closer status could be overstated.