How does the World Baseball Classic affect MLB players' performance?

Comparing the performance of the pitchers and hitters who participated in the three World Baseball Classics to their preseason projections, including a group of "controls," or similar players who didn't participate in the WBC, and found no difference in performance between the two groups.

Share All sharing options for: How does the World Baseball Classic affect MLB players' performance?

Pitchers and catchers have begun reporting to camps to start the 2014 season. For pitchers like R.A. Dickey and Fernando Rodney, the new year represents a chance to bounce back from a disappointing 2013. And there are many in the game -- including scouts, managers, and players -- who would blame their downturn on their participation on last year's World Baseball Classic.

Matt wonders what the WBC should be.

Matt wonders what the WBC should be.

Previous research has been split on whether playing in the WBC increases a player's injury risk. Last spring, Jayson Stark reported on an MLB study that showed WBC participants were less likely than other players to start the season on the DL. But others have suggested that the WBC produces an increased risk over the course of the entire season after their participation. In this article, I want to leave aside the injury question and focus on performance: given that a player participated in the WBC and was not injured, is that player more likely to underperform than his peers?

To investigate this, I collected the Marcel projections for every MLB player on a WBC roster in 2006, 2009, and 2013. The Marcel projections are great for this analysis not only because they are freely available but also because they explicitly include an adjustment for age, a regression component, and a weighted average of each player's previous three seasons. This allows us to get a better sense of where players are in their careers, making it easier to pick the "control" group and alleviating the selection bias that WBC participants will most likely tend to be coming off above-average seasons. Once we have these projections, we can compare them to each player's performance during the season after their WBC appearance to see whether these players systematically disappointed.

Of course, we would prefer to evaluate the performance of the WBC participants against those who didn't participate. I therefore also selected a "control group" of hitters and pitchers who did not play in that season's WBC, but had similar projections to those who did. For the hitters, I sorted all players by projected weighted runs created (wRC) and chose the hitters on either side of the WBC participants. As an example, before the 2013 season, Marcel projected Carlos Gonzalez to produce 90.9 wRC. As Gonzalez played with the Venezuelan squad in the 2013 WBC, he was added to the WBC group while Paul Konerko (91.0 projected wRC) and Justin Upton (88.9 projected wRC) were added to the controls.

For pitchers, I wanted to use a similar statistic that showed runs prevented relative to a league-average pitcher with the same innings pitched. In the absence of one readily available, I sorted the pitchers by (lgRA9 - RA9) x IP2, where lgRA9 represents the league-average runs allowed per nine innings pitched that season. The addition of the square term was needed to separate relievers who performed a few innings well above league average (e.g., Craig Kimbrel) from starters who pitched more innings but were closer to league-average (e.g., Josh Johnson).

Once I had the two groups, I wanted to mitigate the effects of playing time. Too few appearances could be attributed to injury or a reduced role for an aging player. Conversely, too many appearances could skew the results, as rookies who outperformed expectations were rewarded with extra opportunities. To avoid biasing my results in either direction, I excluded all hitters who had more than 133% or fewer than 75% of their projected plate appearances, and all pitchers with more than 133% or fewer than 75% of their expected innings pitched. The following table shows my total sample size, drawn from all three classics and multiple national teams.

I ran two linear regressions: one on projected vs. actual on-base percentage, and one on projected vs. actual wRC. Both regressions used a dummy variable to represent WBC participation. We can see from the tables below that, in both cases, WBC hitters actually slightly outperformed their stateside counterparts, though the effect is so small as to be indistinguishable from random chance.

This figure provides a visualization of the same data. Here, we see a scatter plot of each group's actual vs. projected wRC, with a diagonal line representing an actual wRC value exactly equal to the projected value. We note that the WBC participants (red squares) occupy the same space as the non-participants (blue diamonds) and that, if there is any difference, there may be a few more non-participants whose actual wRC value is below their projection. 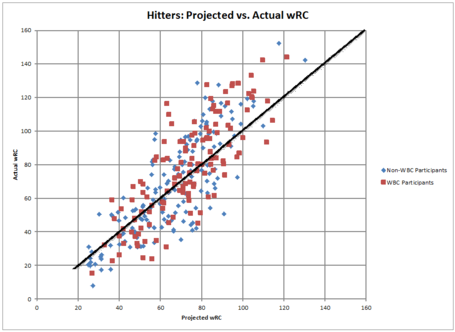 Using the same methods, I found that WBC pitchers performed at the same level as the "control" pitchers in terms of ERA and FIP. We can see that the WBC pitchers saw a very slight increase in ERA, and a slight decrease in FIP. However, both differences were so small as to be below the level of what would normally be considered significant.

To close, let's compare the projected and actual FIPs on a scatter plot. As with the batters above, the red squares represent WBC participants, the blue diamonds represent controls, and the black diagonal represents the break-even point, where the actual FIP matched the preseason projection. Again, both groups are distributed over the same range, although in this case there are a couple of extra lower-than-expected performances put forth by relievers who appeared in the WBC. 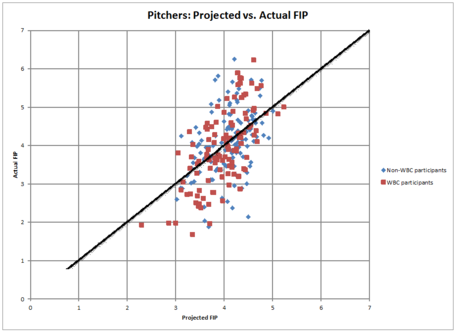 In this study, I found no other decrease in performance when comparing hitters and pitchers to their preseason projections. It seems probable that the players we think of as underperforming are actually just regressing: both Rodney and Dickey had the best seasons of their careers in 2012, which helps explain why they were selected for their national squads in the first place. Now admittedly, previous work has suggested that pitchers may be more likely to suffer an injury after playing in the WBC, and I don't have the medical knowledge to dispute that. But I would point out that, even now, we have very little clue how to handle young pitchers to prevent injury, so we should be careful not to assume this correlation implies causation.

All statistics courtesy of FanGraphs, Baseball-Reference, and Retrosheet. WBC rosters available at worldbaseballclassic.com.

Bryan Cole is a featured writer for Beyond the Box Score. In the interest of full disclosure, he likes any international sporting event. You can follow him on Twitter at @Doctor_Bryan.