Baseball may be in a second Golden Age in terms of attendance. Is it real, and can it last?

Share All sharing options for: Major League attendance trends past, present, and future

I'm relatively new to the Internet blogging thing. I've been amassing baseball statistics for about 10 years or so and tried to start a blog in 2012 but couldn't get enough readership to make it work. I tried again in 2013, hoping to marshal my Twitter army of 20+ followers to see if I could generate interest. This took time, but I wrote something that got above the usual 50 or so hits--it's been read almost 2,000 times, so it must have struck a chord with someone. It was on baseball attendance trends over the past 60 years or so.

This chart shows MLB average attendance per game from 1950 through 2013: 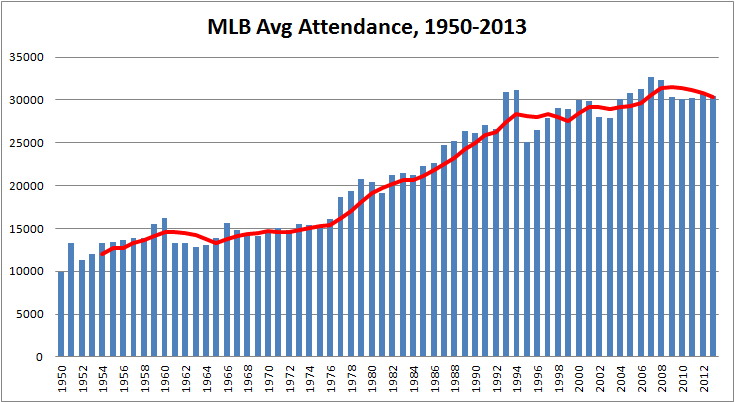 Attendance data prior to 1950 is spotty, and the Great Depression and World War II had impacts on attendance that wouldn't accurately reflect fan interest. Baseball in the 1950s had outstanding players like Willie Mays, Mickey Mantle, Hank Aaron, Ernie Banks, Warren Spahn, Whitey Ford and countless others, but it didn't translate into game attendance. Westward migration in population intensified after WWII, and increasingly old ball parks in bad parts of eastern cities lost their appeal. In short, the average fan was looking at baseball and found it wanting.

A brief look at the attendance of the Yankees, Giants and Dodgers shows why two of those teams departed for the West Coast. The Yankees won 6 World Series, played in 2 others--and saw their average attendance decrease from 27,000 a game to 20,000 from 1950 to 1959. By the time the Giants and Dodgers left they were both drawing fewer than 15,000 fans a game. 14 of the 20 World Series teams of the 1950s were from New York and people weren't attending their regular season games.

Expansion in the 1960s helped, but not much. The Dodgers saw an immediate spike in attendance upon relocating to Los Angeles but the Giants, while seeing a bump, didn't have as dramatic an increase. New teams and relocations provided brief surges but did little to move overall average attendance. Pitching was at its heights with players like Sandy Koufax and Bob Gibson, base stealing began to be incorporated into the game again, but still attendance stayed relatively flat throughout the decade.

I'm at the tail end of the Baby Boomers, being born in 1962 and making me 51 today. I graduated from the University of Iowa in 1983 and my first job was as a manager for Kmart. After some training I was transferred to Evanston, IL, arriving in the Chicago area around the same time as Rick Sutcliffe to the Cubs and was able to see my team make the playoffs for the first time in 39 years. I didn't attend any games (it's difficult to do that working 60-70 hours a week), but something was happening at Wrigley Field. They had new owners in the Tribune Company, a popular broadcaster in Harry Caray and a new hip Wrigleyville neighborhood, one that even 10 years earlier had been considered dicey. The Cubs reached a low of under 10,000 in average attendance during the strike-shortened 1981 season. By 1984, with Van Halen's "Jump" playing before every WGN TV broadcast, attendance was up to 26,000+, which is what the novelty of a good Cubs team can do.

As the chart shows, attendance didn't just increase in Chicago. As people aged into the prime baseball-attending years, the cumulative effect of greater population, more disposable income and nicer parks created a period of sustained increases in attendance. There were bumps in the road--the strike of 1994-1995 hurt attendance but it rebounded by 1998 when Sammy Sosa and Mark McGwire had their epic home run seasons, followed by the emergence of Barry Bonds as one of the best hitters in baseball history. This chart adds two elements to gauge the popularity of baseball: 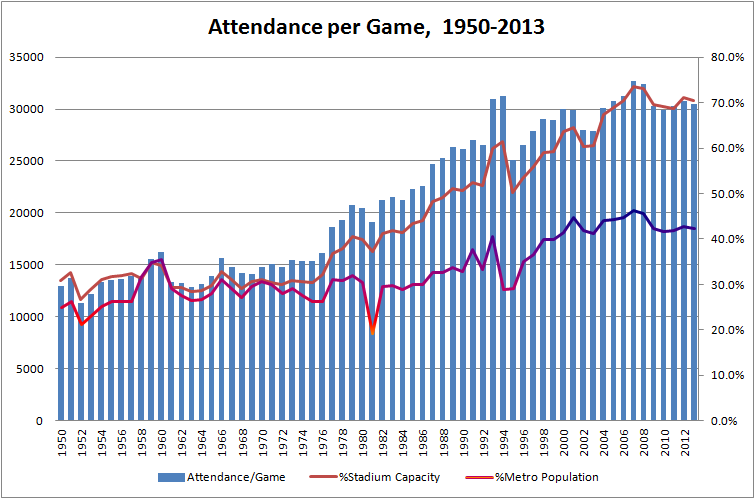 The first line shows the percent of stadium capacity teams were using, which trends closely with attendance. The second shows the percent of metropolitan population that attends a game, a measure to see how popular a given team is. I used these two because several things have changed in the past 60 years or so, such as smaller stadiums and the obvious increase in U.S. population from around 150 million to over 300 million. Increased population provides a larger pool of potential attendees but it appears the tendency to attend a game also increased over time.

When I first wrote about this last year, I concluded by stating that baseball was in good shape from an attendance standpoint, the declines from 2007 on notwithstanding. I'm not so sure anymore--attendance peaked in 2007, declined in 2008 and fell dramatically in 2009, from which it has yet to recover. At my advanced age I'm still a viewer the World Series covets since every time I tune in I decrease the average viewer age from its current 54.4 years. Ticket prices are climbing ever higher and coming close to being unaffordable to the average fan. Factoring in travel a typical game is a 6-hour time commitment, and the choices for spending that time continue to expand. Add in the comfort of watching baseball in 55-inch high definition in air-conditioned comfort and beer at the right price surrounded by a computer, iPad and iPhone to keep up with stats and commentary, well...

I'm not predicting the end of baseball, but the 30-year trend of increased attendance has stalled and may not resume. Ratings for the 2013 World Series were an improvement over 2012 but still the 4th-worst in history. Nothing stays the same, and perhaps baseball had its run and simply reached the logical conclusion of a run-up in attendance that couldn't be sustained. There are numerous factors affecting attendance that are beyond the reach Major League Baseball's influence (the economy, what teams are in the World Series, etc), but there are a whole host of factors they can control, such as pricing, game length and even season length. The best way to maintain and expand attendance is to establish a foothold with the next generation of fan.

Ideas come and go in baseball. Segregation, public financing of stadiums (thanks Miami!) and the designated runner all came and went, and the near future will show whether strategies like lucrative local broadcast deals, corporate stadium naming rights and stratospheric ticket prices can be maintained--the MBA in me says no to each (and to public financing of stadiums, which I find equal parts egregious and disingenuous). All sports benefited greatly from the confluence of Baby Boom aging and economic expansion. What will be the future when neither of these factors is a given?