Who has hit the longest home run at Dodger Stadium in the HitTracker era?

If you've been paying attention to this series, you will have noticed that this is the first repeat moonshots performance. The player who launched last episode's longest home run (at Coors Field) hit the one at Dodger Stadium as well. Only 16 days apart.

Matt Holliday is the player, achieving this shot at Dodger Stadium when he was still a member of the Colorado Rockies. And while Coors Field's home run distances can be debated, Dodger Stadium has nowhere near as drastic a park effect as Coors Field. Although, there are factors that affect home runs at Dodger Stadium. Case in point, Matt Holliday would have only hit this home run 457 feet without the wind behind it, but it actually traveled 476 feet. If you were to measure the distance using ESPN HitTracker's HR Standard Distance (HRSD), you would find that Barry Bonds is the true king of Dodger Stadium. On August 7, 2006, Bonds smashed a baseball 465 feet (HRSD) off of Chad Billingsley. Nevertheless, the wind was there to help Holliday whether he wanted it to or not.

On September 3, 2006, Aaron Sele began the top of the fifth inning for the Dodgers leading 2 to 1 against the Rockies. A quick succession of hits and sacrifices moved Colorado into the lead, with a score of 5 to 2. With a man on first base and one out Elmer Dessens enters the game to relieve Sele and ideally mitigate the damage. The first batter to face Dessens is Matt Holliday, who can likely seal the game with a run-scoring hit, in turn preventing the red-hot Dodgers from winning their eighth in a row. Dessens winds up and throws a pitch to Holliday, who fouls it off. The motion is repeated and the next pitch is thrown, this time ending in a different result. With a smack of the bat, Holliday sends the ball way back past the left-field bleachers, past the first bullpen wall, and almost straight out of the stadium. 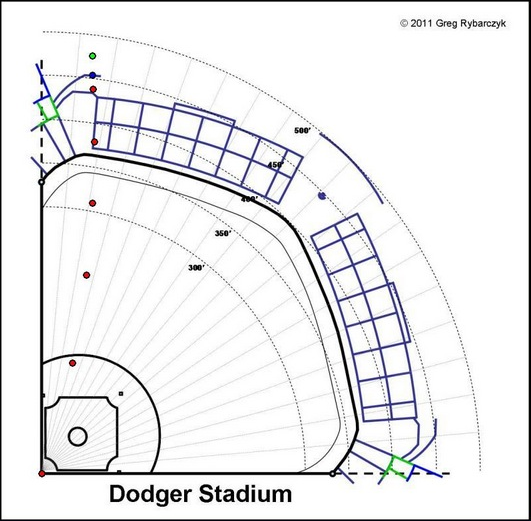 One odd statistic to note is that Matt Holliday's five farthest home runs in 2006 were all hit in September, all within three weeks of each other. This particular home run marked the first in the series, followed by a 460 foot no-doubter off Pedro Astacio on the 10th. On the 19th, Holliday blasted a 498 foot shot into orbit off of Matt Cain, and then on the 21st, he barrelled another 476 foot shot off John Smoltz. The barrage finally ended with a 467 foot home run off Chuck James on the 24th.

In 2004, Holliday's rookie season, he finished fifth in NL Rookie of the Year voting. Some attributed his success to Coors Field and other's realized that he only had a 104 wRC+. In both cases though, voters and fans alike were stunned with the production they were seeing from a seventh round pick. He built off his first season in 2005, improving his batting average to .307 and his OPS by .029. Holliday entered the game at Dodger Stadium described above with an enormous season in progress, batting .328 and already with 24 home runs under his belt.

Elmer Dessens began his career as an international signing in 1993 by the Pirates. He didn't pitch in 1994 and began 1995 in AA at the age of 24. Dessens quickly impressed with a 2.49 ERA over 27 starts even if he only managed to strike out four batters per nine innings. In 1996 he again began at AA, but Dessens shot up the organizational depth chart over the course of the season and finished the year in Pittsburgh's bullpen. He spent two more years with the Pirates, pitched a year in Japan, returned to the Reds for three years at the turn of the century, and started 2003 in Arizona. Dessens was already a journeyman when he was 32 years old. In late 2004, Dessens was traded to the Dodgers, where he stayed until the start of 2006, when he was traded yet again, this time to the Royals. But then he was traded back to the Dodgers midway through 2006. He was never great in a season and rarely exceeded 0.7 fWAR in any given year.

Some circumstantial splits do exist that could explain this monster blast. Matt Holliday's prowess against right-handed pitchers is one of them; he hit 30 of 34 home runs off righties. Another possible split is that Holliday crushed finesse pitchers in 2006, batting .358 and slugging 13 home runs against them. A finesse pitcher can be characterized as a pitcher in the bottom third of the league in strikeouts and walks. Dessens only struck out 15.6% of the batters he faced and walked only 6.6%, so he fits the term well. Another possible explanation could be that when batters swung at the first pitch Dessens allowed an .821 OPS and 5 home runs. The most plausible reason I can find for this blast happening is overuse. Dessens had pitched four times in the span of six days (September 3rd was the fifth time) leading up to the home run. He had thrown a total of 85 pitches in that time frame. Maybe all of these factors were in play.

Holliday's home run was more of an insurance shot than a game-changer for the Rockies, who went up 7 to 2 over the Dodgers after the blast. He raised the Rockies chances of winning to 93% in the firth inning, and Colorado had the game statistically locked up by the bottom of the seventh.

Just one memorable moonshot in a cavalcade of others in September 2006 for Matt Holliday that meant much more to the fans and teammates at Dodger Stadium.