Home run rates aren't predictive, but some pitchers are giving up a ton of homers each year. What gives?

Share All sharing options for: Serving it up: profiling home run prone pitchers

Home runs are often considered the pinnacle of baseball excitement. While I actually prefer the stolen base, from what I hear, chicks dig the long ball. By way of experience, there’s a wide gap in excitement between watching your favorite team hit homers and watching your favorite team give them up on a regular basis. Although it can be painful to watch the ball come out of a pitcher’s hand and end up over the fence, I don’t usually get too worked up about it. Why is that? Because home runs aren’t supposed to have a predictive value for pitchers.

Bryan examines how some pitching statistics correlate from one year to the next, using Steve Staude's correlation tool from FanGraphs.

As our own Bryan Grosnick pointed out a few weeks back, home runs don’t stick around for pitchers from year to year as there’s almost no correlation between home runs allowed in Year X and Year X+1. Bryan utilized a great new tool by Steve Staude to find this and I’d encourage everyone to spend a few minutes playing around with it. But while home runs don’t correlate from year to year across the broad spectrum of all major league pitchers, I felt like there are some obvious pitcher profiles that yield more home runs than others. While the correlations would suggest that home runs allowed are essentially random from year to year, there are some pitchers who appear to allow them with a far greater frequency than others, even when analyzed over a three-year time span. Conversely, there are pitchers who are routinely stingy and have kept the ball in the park over that same period of time or even an entire career.

With this in mind, I decided to dig into some data and find out which types of pitchers are home run-prone compared to pitchers that are good at keeping the ball in the yard. The universe of pitchers who have thrown a baseball in a major league game in the last three years is way too big to look at, so I narrowed my scope to starting pitchers who have thrown 250 innings or more from 2011 through 2013. This gave me a more manageable number of pitchers to look at, eliminated pitchers with only one year to observe, solved some sample size concerns and kept guys who were spot-starters or "Quad-A" fodder from making the cut. From this list, I looked at the 20 pitchers with the highest home run rate (HR/9) and compared them to the 20 pitchers with the lowest home run rate (HR/9) since 2011 with the 250 inning minimum.

The results weren’t exactly what I’d had in mind. Before we get to that, I think it’s important to point out that there’s some serious survivor bias going on here in regards to the pitchers who yield home runs most frequently. Most guys with astronomical home run rates pitch themselves right out of the majors and aren’t likely to reach the 250-inning minimum I described above. Even with this in mind, I was still left with a list of pitchers who, despite their proclivity for giving up the long ball, have managed to hold on as big-league starting pitchers, usually because they have some other quality that makes them desirable to a major league organization (durability, low walk rates, etc). With that caveat in out of the way, let's get to the trends from the comparison!

There were a handful of takeaways that initially stood out. The 20 pitchers with the highest home run rates:

But those are all things that we likely could have surmised on our own. It’s not a surprise that HR-prone pitchers give up a lot of fly balls and that those fly balls, when they stay in the yard, often turn into outs. I knew I needed to come at this from a different angle to find anything meaningful (if there was anything meaningful to find at all).

Going deeper, I decided to look at PITCHf/x data. I wanted to identify any usage patterns and compare weighted pitch values. If there was going to be a breakthrough, I thought, this is where I’ll find it. Apparently the word "breakthrough" was a little strong as I was somewhat disappointed at the similarity between the two pitcher groups through the PITCHf/x lens -- while most characteristics were similar, the one area that did stand out was fastball usage.

The home run-prone group of pitchers tends to favor four-seam fastballs according to PITCHf/x. Four-seamers run straight, at least compared to other fastball types, and a pitch moving in a (relatively) straight line is easier to square up than one that’s running down-and-away or in on the hands of the batter. Also, when filtering for pitchers with the highest home run rates, it’s littered with less-than-premium velocity guys. The top five HR/9 pitchers consists of Bronson Arroyo, Colby Lewis, Phil Hughes, Joe Blanton and A.J. Griffin. These guys all favor four-seam fastballs to two-seamers or cutters and one can easily see where mixing straight fastballs with these low velocity profiles would lead to a lot of dingers. Instead, the 20 pitchers with the highest home run rates largely rely on off-speed and breaking stuff to generate movement since they prefer the four-seam fastball to one that moves more deliberately.

On the flip side, we see a strong increase of two-seam fastball and cut-fastball use among the pitchers with the lowest home run rates. Just like straight fastballs are easier to crush, those with movement are more difficult to hit hard. This leads to weak contact and an increase in ground balls, matching up with the ground ball rates noted above. While overall contact rates between the two groups are relatively similar (80.9% for low HR/9 pitchers, 82.6% for high HR/9 pitchers), the quality of that contact varies between the two groups with the homer-prone pitchers giving up more line drives.

When looking at swing data, most characteristics are similar between the two groups, which surprised me initially. However, they differ in one respect -- pitchers who limit home runs appear to have the ability to generate swings and misses at pitches outside the zone at 4.4% higher rate than those who have issues with giving up home runs. These guys have the ability to expand the zone and get hitters to chase unsuccessfully. This underlies the initial finding of a strikeout rate discrepancy between these two groups.

Despite the low correlation between home run rate from year to year, I believe there is a profile of pitcher that is more likely to give up home runs than others. Correlation does not equal causation and this topic requires further study without a doubt, but from the analysis presented, guys who throw low average velocity four-seamers without the ability to generate swings and misses out of the zone will be forced to come over the plate with likely sub-par raw stuff, resulting in more home runs per nine innings when compared to pitchers with fastball movement and an ability to expand the zone. It should come as no surprise that pitchers with more fastball movement have more valuable fastballs on average and are able to generate more grounders when compared to the home run-prone group.

Below is a table identifying each group of pitchers, sorted by HR/9, that displays their dominant fastball type according PITCHf/x and the average velocity of said fastballs. (Note: Freddy Garcia and Adam Wainwright used two different fastballs with nearly the same frequency, so both types are included for them)

As you (hopefully) noticed, the pitchers in the left column give up a lot of dingers and throw a lot of four-seam fastballs. The average velocity for these pitchers is also lower (90.1 mph) than those who give up fewer home runs (91.3 mph). To verify this relationship, I ran a correlation of non-four-seam fastball use (two seamers, cutters and sinkers) and home run rate. A graph of this correlation is below: 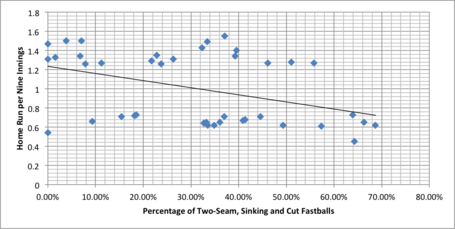 As is clear by the image above, there is a trend amongst this group for home run rates to decrease as the use of two-seamers, sinkers and cutters increases (with an r-value of -0.4025). Of course, this trend is exacerbated as the two groups used represent the pitchers with the highest and lowest home run rates, with everyone in the middle being cut out. The trend is intriguing nonetheless and suggests that utilizing fastballs with deliberate movement may limit home runs allowed.

There's more to pitching than just keeping the ball in the yard, of course. There's strikeouts, walks, hit batsmen among other things. By employing an arsenal of moving fastballs, however, pitchers may be able avoid one type of true outcome. Limiting home runs is a key component to any great pitcher's game, as those that get taken deep with high frequency don't usually last all that long, and those that do usually end up as back end starters.

I encourage any interested parties to dig a little deeper if interested. While home runs are not predictive across the entire baseball landscape, there’s clearly a type of starting pitcher that is home run-prone and while we may see these pitchers as technically not very good, there’s a market for them in the right scenario. As new pitchers make their way to the majors with similar profiles, I’ll be keeping eye out to see if home runs follow/allude them at an abnormal rate. Until then, I’m open to any suggestions about how else we might be able to identify a propensity for home runs allowed and project them going forward.

Jeff Wiser is a contributor to Beyond the Box Score and co-author of Inside the 'Zona, an analytical look at the Arizona Diamondbacks. He occasionally blogs about craft beer at BeerGraphs and you can follow him on Twitter @OutfieldGrass24.