Sonny Gray: Why He'll Be an Ace for Oakland

Sixty-four regular season and thirteen postseason innings made Sonny Gray the talk of the playoffs for Oakland in 2013. Here's why Oakland has found themselves an ace, rather than a flash in the pan.

Share All sharing options for: Sonny Gray: Why He'll Be an Ace for Oakland

Sonny Gray made his Major League debut as a reliever, but it didn't take long for Oakland to find room for him in the rotation. In July Gray made two appearances for Oakland as a reliever, but by August he had earned himself a shot at a regular rotation slot for the Athletics. Gray would start 10 games for Oakland over the last two months of the season, posting a 2.67 ERA for the season. He struck out more than a batter per inning, and walked just 2.81 batters per nine innings. His 3.35 K/BB ratio compared favorably to other dominant pitchers like Jose Fernandez (3.22 K/BB), Zack Greinke (3.22 K/BB), Madison Bumgarner (3.17 K/BB) and Justin Verlander (2.89 K/BB). Obviously those pitchers did that over a full season, while Gray only had to maintain his performance over 64 MLB innings.

Gray's SIERA of 3.21 was the 12th best among starters who threw at least 60 innings, and slotted him between two other young phenoms in Stephen Strasburg and Jose Fernandez. Gray's regular season dominance was a revelation for Oakland, and his postseason dominance would only help grow the hype surrounding the young hurler. Over 13 innings in the playoffs Gray gave up just 3 earned runs and struck out 12 batters, including 8 shutout innings in Game 2 of the ALDS against Detroit. 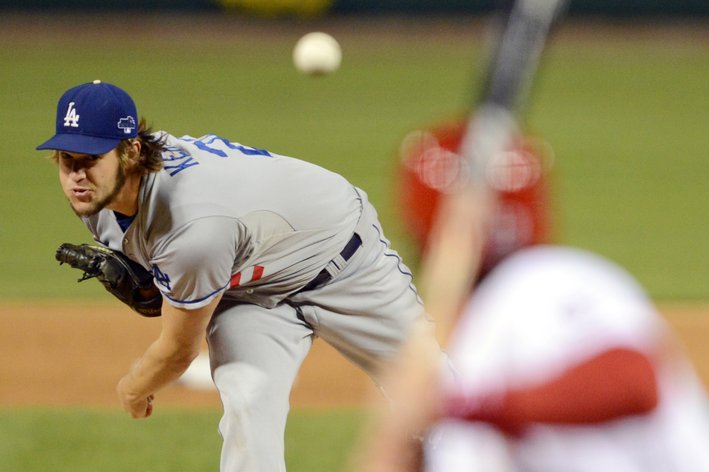 Scott Lindholm looks at normalizing strikeout rates for different parks and eras, with some fun results.

The question is, can Gray do that full-time for the A's next season? To answer that we need to take a look at how he was so effective, and what he can do to get even better going forward.

There are two main attributes that lead to much of Gray's success last season. The first is that Gray knows when to throw which pitch, and he has remarkably consistent mechanics that make it difficult for hitters to pick up the ball.

Gray can throw six pitches in any given at-bat, though his usage of each pitch varies depending on what he's trying to do. For example, Gray throws his curveball 48% of the time to lefties, and 47% of the time to righties when he has two strikes on them. Gray's curveball has a 15.31% whiff rate, so it's very clear that he likes to throw that pitch when he has a chance to get a strikeout. Actually, the above is not completely true. PITCHf/x says Gray also throws a slider to right-handed hitters, but Gray himself says it's just a harder curveball, as you can see below. PITCHf/x has him throwing that pith 9% of the time in 2-strike counts, so right-handed batters see a curveball of one type or another roughly 57% of the time in 2-strike counts.

PITCHf/x says he has a slider, but, well, let him explain. "I throw a curveball and sometimes just add and subtract - just one grip." So that sounds like one pitch. "I think it has the same shape," Gray said. Still sounds like one pitch. "Sometimes when you throw it a little harder, it might be a little smaller," he admitted. Huh. Well now we know why the classification systems call it a slider. -

Gray also mentioned in that same article that he decided in late 2012 to go back to attacking hitters, and making sure the batter had to hit his best stuff. Below is a chart that shows Gray's pitch usage last year, and how he approached at-bats after falling behind, getting ahead, etc. 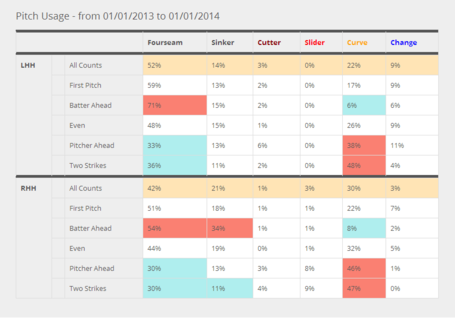 It is clear, based on the chart above from Brooks Baseball that Gray has no problem challenging hitters. For example, the batter typically expects a hard pitch when he's ahead in the count because it's easier for the pitcher to control and get over for a strike. Gray does just that, throwing a hard pitch 88% of the time to left-handed batters when behind (71% fastballs, 15% sinkers, 2% cutters) and 89% of the time to right-handed batters (54% fastballs, 34% sinkers, 1% cutters). Gray knows that the batter is expecting a hard pitch that he can get over for a strike. Gray complies, throwing exactly what the hitter is waiting for, and challenging him to hit it.

When Gray gets ahead, he once again delivers exactly what the batter expects. After falling behind the batter might suspect that Gray will throw his best pitch, a curveball. For left-handers he does just that 38% of the time when he's ahead in the count, and 48% of the time with two strikes. Right-handers get 54% curveballs (including what PITCHf/x classifies as a slider) and 56% curveballs with 2 strikes in the count.

Gray has no problem challenging hitters, and for the most part his stuff is good enough that they can't make solid contact against him. Gray has something else going for him though. Take a look at the data below, pulled from Fangraphs, showing how plate discipline for hitters against Sonny Gray compares to MLB averages.

Gray throws pitches in the strikezone 2.8% more often than the average MLB pitcher but batters swing at pitches in the strikezone 9.7% less than they do compared to the league average. It's interesting that Gray throws more pitches in the zone than the average pitcher, but batters swing at them significantly less than they do versus the MLB average. One possible explanation for this is that hitters have a difficult time picking up pitches out of Gray's hand, which makes it more difficult for them to decide to swing or not. The chart below suggests that this might be a big part of it, as Gray's release point for all of his pitches is remarkably consistent. 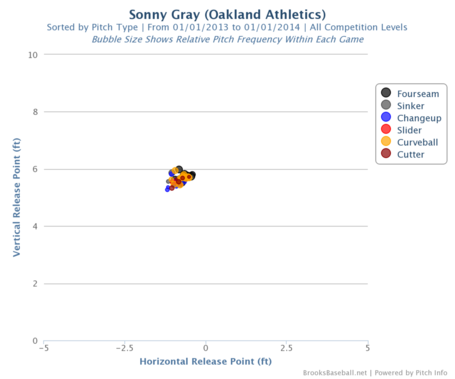 Each point on the graph above is Gray's average release point for one game and a given pitch. What you have is a set of six release points for each of the twelve games Gray pitched in during the 2013 season. At most we're looking at a disparity of a few inches, which could likely be explained by slight movement on the rubber from start to start. In general, all of Gray's pitches are coming from the same point, just under 6 feet off the ground and roughly a foot to the right of the middle of the rubber. The only minor distinction between pitches is that Gray's changeup appears to be released slightly lower and further to the left (from the batter's perspective; farther right for Gray) compared to his other pitches. The graph below shows Gray's release point by pitch type, highlighting how difficult it must be for hitters to differentiate between a hard pitch and breaking ball. 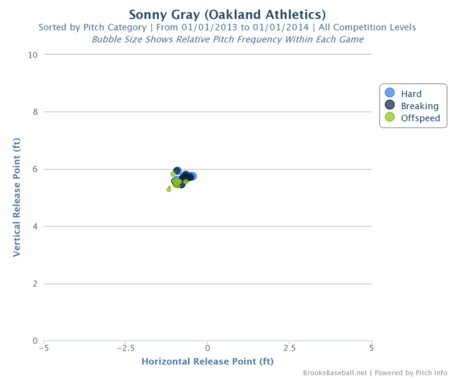 This is a problem for hitters when you consider the vast array of pitches Gray can throw, and how much those pitches move from the batter's point of view. The chart below shows the vertical and horizontal movement of Gray's pitches. When viewing this chart keep in mind that nearly all of these pitches come from almost the exact same release point. That means the batter has to determine the pitch Gray is throwing after release, before deciding whether or not to swing. 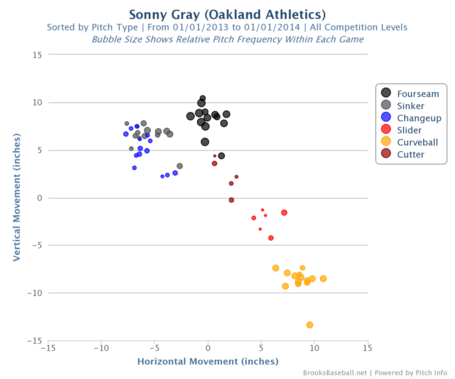 The horizontal axis is horizontal movement of the pitch (compared to expectations for a ball with no spin) and the vertical axis is vertical movement of the pitch. Gray's pitches have a range of roughly 20 vertical inches, and 20 horizontal inches. Some simple math tells us that when Gray releases a pitch, the ball could end up anywhere in the 400 square inches surrounding the expected point where it would cross the plate, depending on what the pitch is. For some context, fellow Beyond the Box Score analyst Jon Roegele found that the strikezone typically ranges from 400 to 500 square inches, meaning the batter really has no idea what to expect when Gray releases the ball.

Gray's repeatable mechanics make it very difficult for hitters to pick up his pitches before he releases them. That gives him an advantage, and allows him to challenge hitters without worrying that they'll be able to pick up the pitch that is coming. Based on this, we'd expect Gray to have an above average called strike rate, compared to the league average since hitters would have difficulty picking up pitches early and identifying if they're balls or strikes. This is in fact the case, as Gray's 22.7% CalledStr% is more than 5 percentage points above the league average of 17.5%.

His combination of high strikeouts, low walks, and high groundball rate make him a very unique pitcher indeed. In fact, only 16 starters with a minimum of 60 innings pitched had a higher ground ball rate than Gray last year. Two of those pitchers had strikeout rates above 9, but neither of them walked fewer than 3 batters per nine innings. Both of those pitchers, Tyson Ross and A.J. Burnett, posted solid ERAs (3.06 and 3.30 respectively) for their clubs.

The formula that Sonny Gray used for success in 2013 suggests that he can not only keep up his strong start, but grow and become an ace in no time. Gray was a top 20 pitcher among pitchers with at least 60 innings, and everything we can see in the stats suggest that he'll continue to dominate like that for a long time.

All statistics courtesy of Fangraphs, Brooks Baseball, and Baseball-Reference. Thanks to James Gentile (@JDGentile) and John Choiniere (@johnchoiniere) for data research help.