The Cincinnati Reds are rumored to be kicking the tires on Grady Sizemore, who is two seasons removed from his last MLB appearance. Is he worth taking a flyer on, despite his injury history?

Share All sharing options for: Sizing up Grady Sizemore

Arguably the best all around centerfielder in the game between 2005 and 2009, Grady Sizemore's more recent seasons have been fraught with injury and missed opportunities. Despite a very limited body of work as of late, there have been rumblings that the Cincinnati Reds are possibly interested in giving Sizemore an opportunity to show his mettle, more than likely with a minor league deal. This potential pairing would provide the team positional depth across the outfield, but particularly in center, where the Reds appear to be committed to having speedster Billy Hamilton as their primary centerfielder for 2014, even with his underdeveloped bat. For Sizemore, it is an opportunity to show that he can still play the game and provide capable production in spite of a handful of lost seasons due to a myriad of injuries.

With most signs pointing to the 31-year-old having a clean bill of health after sitting out the last two seasons, the question lies in how much Sizemore has left; while he will probably never return to his All-Star, 5+ fWAR form, does he still have enough in the tank to be a productive spot starter/fourth outfielder?

Let's briefly take a look at some of Sizemore's averages; here, we have his 2005-2009 average productivity (rookie season removed) before injuries began to take their toll, contrasted with the average production of his last two seasons, which were marked by numerous injuries:

While there are some obvious downswings in productivity as judged by his wRC+ and WAR numbers, there are also more subtle changes at play; in particular, he was once a patient hitter with a good eye and a knack for hitting for power and getting on base but has suddenly become a less powerful, less patient hitter. While a lack of plate appearances does play a role, it is difficult to explain the decline of Sizemore without the injury narrative.

And what injuries they were. An elbow surgery to clean out loose bodies, three knee surgeries, two of which were of the microfracture variety (of which he was possibly the first baseball player to have undergone the procedure), two sports hernia procedures, as well as a lower back microdiscectomy have all been performed on the 31-year old over the span of his major league career. Here's a brief look at what has slowed down Sizemore and for how long, courtesy of his Baseball Prospectus player card:

*49 total; one game missed due to influenza

While the table above isn't meant to pile on, it does provide a tacit trend in Sizemore's injurious foibles -- much of what has felled him are injuries to his core. As such, these injuries can take longer to fully recover from and can be more troublesome due to the core being, well, at the core of most baseball activities, playing an important role in the transition mechanics involved in throwing, swinging, and running. With a sports hernia, a tear or weakening in certain muscles of the abdomen can cause pain and a decreased ability to properly throw or swing a bat. With regards to the knee, Sizemore having had procedures on both knees is troublesome, especially considering his right knee has been worked on twice, a possible indication that the first procedure did not take as well as hoped. With Sizemore being a lefthanded batter, extension of the right knee as he braces his front side as he brings his bat throughout his swing path, with his left knee rotating inward concomitantly are two actions that are at risk of being compromised post-surgically. Regarding his lower back (or lumbar) microdiscectomy, the lumbar spine is essential to core rigidity throughout the swing, allowing the proper and maximal transfer of torque through the legs and trunk towards the arms and wrists. Lumbar rotation is at the forefront of this as well as similar mechanisms when throwing. With a microdiscectomy typically pursued to alleviate leg pain as it pertains to nerve root impingement more so than lower back pain, this combined with Sizemore's history of knee issues along with lower abdominal woes, needless to say, the lower half of his body is going to make or break any prospects of a future in the bigs.

That being said, have we seen a change in approach from Sizemore given his injury issues? Are the numbers we discussed previously truth, or just an artifact arising from an inability to string together enough plate appearances to truly see the hitter Sizemore is today? 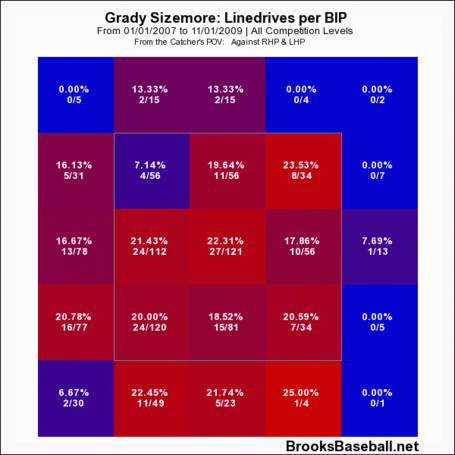 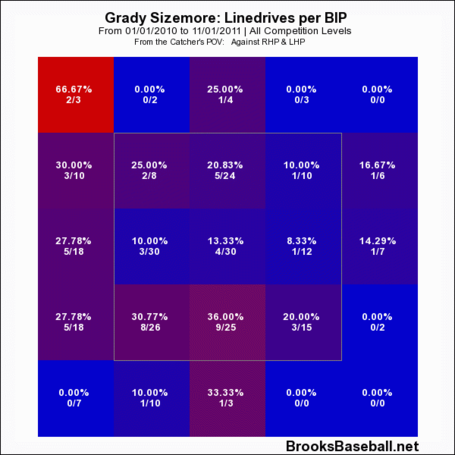 So far, not so good; let's see if he remained a patient hitter, at least.

Sizemore's whiffs per swing in his salad days: 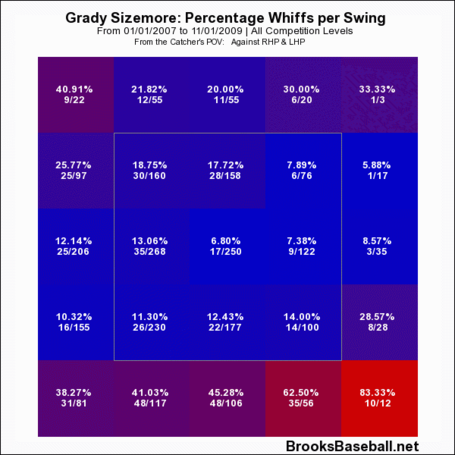 ...and for the injurious years: 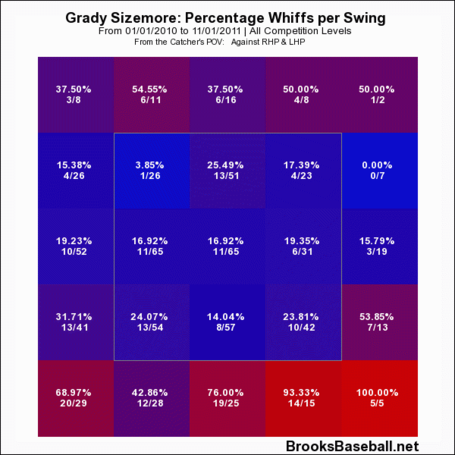 While not as egregious of a change as compared to his line drive rates, we do see Sizemore having issues with the lower part of the zone on both sides of the plate. While I provide these charts collapsed across all pitch types, when pitch types are considered -- hard, breaking, and offspeed -- these results are greatly driven by Sizemore's difficulty to lay off or identify non-fastball offerings. Given his issues with his lower half with respect to injury, it does lend credibility to the idea that not only have the injuries taken their toll, they have done so in a way that has possibly altered Sizemore's approach at the plate, leaving him susceptible to offspeed pitches in the dirt. Given his bad knees and surgically repaired core musculature, there is a possibility that while the quickness and eye is still there, the ability to hold up or quickly alter his swing when he is fooled is no longer there. Add to this the reality that he has had an additional knee procedure and a back procedure post-2011 and you are left with more questions regarding what kind of hitter Sizemore could potentially be in 2014.

Hitting isn't all that Sizemore brought to the table in his healthier days; he was also a capable defensive centerfielder. Let's now briefly turn our attention to some of his defensive exploits and see how his range and arm have potentially been affected by his injuries:

By the looks of it, Sizemore's range has been affected, but is still doing an admirable job of making plays on balls he can get to (RZR), but does appear to have lost a step (RngR). Overall, his arm appears to be about the same as it was before surgery, but his decreased range does not smile favorably upon him, when looking at his UZR/150.

When looking at his MLB numbers, Grady Sizemore's premature decline due to injury was already in motion; knowing that two additional surgical procedures have been performed after his last MLB appearance only adds to the doubt and concern that Sizemore can make a full return to the roughly 5 win player he was at his peak. Thankfully for Sizemore, the procedures he has had have been minimally invasive in nature, which bodes well for a more thorough and quicker recovery. Presumably pain free and still with age on his side (but just barely), the potential for Sizemore to become a productive backup outfielder is still there, but not in a way those who have followed his career would recognize. With range that lends him to be more of a corner outfielder, but with a hitting tool that fits the mold of a centerfielder, Sizemore has the potential to fill gaps on a part time basis, but has more than likely seen the last of his days as an everyday starter. Also gone are the power and on base percentage that helped define him as an elite player, but with time honing his eye and swing to counter some of his physical deterioration, Sizemore could be the super sub that any team would love to have on their bench.

All data courtesy of FanGraphs, Baseball Prospectus and Brooks Baseball.