What's Next for the Australian Baseball League?

MLB has made a strong commitment to developing Australia as a market for its signature product. But what happens next for the Australian Baseball League is not so clear.

Share All sharing options for: What's Next for the Australian Baseball League?

In 2014, the first regular season MLB games will be played in Australia, less than two months from now. When the Diamondbacks square off against the Dodgers on March 22 and 23, it will be the D-backs who will bat second as the "home" team. I write about the Diamondbacks with Beyond the Box Score colleague Jeff Wiser, so naturally, I was curious about the state of baseball in Australia.

I ended up writing last week about the Australian Baseball League, and specifically about how the D-backs could take steps in Australia toward forming a new fan base and/or a steady pipeline of talent. The three recommendations (pay a premium for Australian players, start an academy in Australia, and buy or sponsor an ABL team) might make sense for other MLB clubs as well.

But I received some really thought-provoking comments about Australian baseball in general and the future of the ABL that I'd like to examine now.

The ABL is a reboot of a previous league that survived just 11 seasons, folding in 1999. The re-formed version started play in November 2010, and it looks quite a bit different, with just six teams, all of which are owned by the league. The failure of the previous ABL was blamed in large part on rising player salaries, so in the new ABL, salaries are tiered, but standard from team to team. Twenty-five percent of the ABL is owned by the Australian Baseball Federation, but the remaining 75% is owned by Major League Baseball.

In a continued bid to beat out Graeme Lloyd and Dave Nilsson as the best Australian to play MLB, Grant Balfour recently signed with the Tampa Bay Rays.

The vast majority of players in the ABL are from Australia (about 70%), with the rest of the six teams' rosters completed by players from all over the world, particularly Japan, South Korea, Taiwan, and the United States. Some players in the American minor league system have treated the ABL as a winter league—with just 40-45 games stretching 12 weeks from November to late January or early February, it's constructed almost perfectly for that purpose (probably not a coincidence, given MLB's involvement).

Reportedly, some ABL games feature less than a few hundred fans in the stands, and three of the six teams' home fields have seating capacities under 4,000. Google searches for "baseball" have been trending downward in Australia over the last six years, and in a somewhat dated study by the Australian Bureau of Statistics (2009-2010, before the ABL came back), baseball was not included among the top 20 sports by attendance. Still, baseball has a long history in Australia, as it was first played there in the 1850s, and there have been national tournaments for more than 100 years.

Given low attendance, it does not seem that the ABL will be able to sell its franchises to private buyers, at least anytime soon. Even if private buyers came forward, MLB could be loathe to relinquish any level of control, or to foreclose other possibilities. As some have speculated, if this rebooted ABL fails, professional baseball in Australia may be done for good.

Despite the 2001 founding of the Major League Baseball Australian Academy Program, it is not easy for Australian baseball players to develop their skills after the Under-14 level, although club teams do exist for high school-age players (from which American colleges do recruit). A big part of that is the shortness of baseball seasons, including the 40-45 game season lengths of the ABL. But another big part of that (credit to commenter "JW" for this point) is that there just aren't enough good pitching bullets in Australia. Pitchers may be able to get better by throwing at the side of a barn, but it's probably more difficult for position players to simulate the experience of plate appearances. 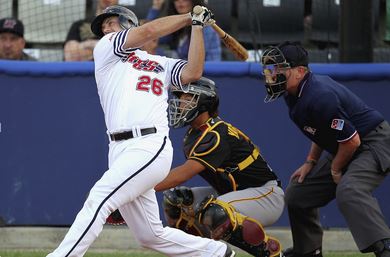 So what's next for baseball in Australia? Partnerships with individual MLB clubs may be the key.

Sponsorship arrangements are the simplest possibility. Four of the six ABL teams have sponsorship arrangements: the Jet Couriers Melbourne Aces, the Adelaide ETSA Bite, the Alcohol Think Again Perth Heat, and the Canberra Cavalry Driven By Rolfe Renault. The Sydney Blue Sox and Brisbane Bandits have not sold any naming rights, as far as I can tell. But, at minimum, all six teams could become formally sponsored by individual MLB clubs in a "sister city"-type arrangement, with the MLB clubs lending coaching and other forms of support, while obtaining a base of operations for scouting and marketing.

A step further would be outright purchases of ABL teams by MLB clubs. With this kind of sturdy financial backing, the ABL could almost certainly expand to as many as 12 teams. With some cross-pollination of coaching staffs, MLB clubs could benefit from keeping a handful of their own minor leaguers under a watchful eye. But rosters could be constructed any way the ABL (read: MLB) chooses.

If MLB clubs bought ABL teams, they (and the league) would have to pick from two fairly incompatible goals: developing players (probably Australians), or putting the best possible product on the field. If the goal is drive up attendance and interest in the game, MLB-owned ABL teams could pull a "reverse NPB" with just four or five spots on each roster allotted to Australians. If developing Australian talent is the main focus, the teams could strive to maintain the percentage of Australians who currently make up the ABL, approximately 70%. Either way, of course, the ABL could benefit from a stronger stream of pitchers from the United States. Since that won't come from college pitchers (the ABL is a pro league, and seasons conflict), we're looking at minor leaguers.

That leads us to another approach that could be taken with the ABL if franchises are sold to MLB clubs: bringing the ABL into the affiliated minor league system. The ABL could be to the winter season what the Dominican Summer League is to the summer: a rookie-level venue for players to get more reps (although the pitching shortage would not necessarily be alleviated this way). This approach might be the last ditch effort for the ABL, if it becomes clear that it'll never take off as a professional league populated mainly by Australian players. It wouldn't necessarily help with the talent pipeline goal (although the MLB clubs owning teams might be particularly willing to take on Australians, especially if the competition is rookie-level). And while it might not be the strongest approach to increasing attendance, it wouldn't be the weakest, either. If the ABL is not likely to become self-supporting, financially, it might not need to do so if it's serving another purpose. Just because the ABL might be dead, so to speak, does not mean it can't be useful.

Even in the absence of affiliation with specific MLB teams, the ABL can still be used as a way to develop MLB minor leaguers. Credit Jeff Wiser with this idea: MLB could style the ABL similarly to the Arizona Fall League. Maybe many AFL players would play in the ABL, or maybe the ABL players would tend to be less advanced. Either way, the ABL would become populated by a subset of a subset of players (perhaps joined by a subset of Australians, as well). The AFL is owned and operated by MLB, largely as a way to keep easier tabs on players that might otherwise be sent to disparate winter league teams. As such, the six AFL teams are each populated by five MLB clubs. And, what do you know, the ABL has six teams, as well.

Turning the ABL into "AFL Down Under" is a fun possibility. As with the affiliated minor league possibility, it might only make sense if it becomes clear that the ABL will not be able to support itself financially. Unlike the affiliated minor league idea, however, an AFL-like ABL would allow MLB to maintain just as much control over the league as it currently exerts. "AFL Down Under" could even be a short-term experiment, and while the requirement for individual MLB teams might be less than that for the AFL, minimums for pitchers would have to be carefully considered.

The Australian Baseball League's success in the next few years may dictate its future, with MLB taking small and deliberate steps in keeping a foothold in that country. But between the Academy Program and holding two regular season games at the Sydney Cricket Ground, Major League Baseball is clearly committed to helping baseball grow in Australia, long term. MLB has a handful of possible routes it could take with the ABL, and I, for one, am fascinated to see what happens.

Ryan P. Morrison is a Beyond the Box Score contributor, and co-author of Inside the 'Zona, a site on the Arizona Diamondbacks with a sabermetrics slant. You can follow him on Twitter: @InsidetheZona.