Alex Cobb Has Next

He doesn't get many headlines or accolades, but is Alex Cobb on his way to Cy Young buzz in 2014?

Share All sharing options for: Alex Cobb Has Next

Alex Cobb is good. He's better than good, actually. In fact, I'd wager that he is well on his way to becoming a top-20 starter in the major leagues, assuming good health in 2014.

Part of my confidence is undoubtedly my personal bias and affinity towards pitchers who possess good changeups, or splitfingers, in some cases. Cobb is more than a splitfinger guy, though, and he finally put everything together in 2013, proving that his early-career peripherals were a sign of things to come.

In 2013, Cobb made an obvious effort to use his sinker more than his four-seam fastball. After April, Cobb didn't throw his four-seam offering much at all, basically scrapping it altogether, except in June (3.52% usage). Cobb's sinker doesn't generate a ton of whiffs, but it's similar to his splitter in terms of movement, which could give us an idea as to why hitters struggled so much versus the latter offering.

Swinging-strike rate is always my first stop when a pitcher's strikeout rate increases. In 2013, Cobb's overall swinging-strike rate rose roughly two percentage points to 9.2%, which was just a tad above league average for AL starters.

Cobb's splitter, unsurprisingly, was the main reason for this spike. Opposing batters posted a swinging-strike rate of 14.6% on his splitter in 2012. That number spiked to 18.6% in 2013. Incredibly, his usage of the pitch didn't change much at all; if anything it declined a little bit. Part of this, at least according my eye, is due his ability to disguise the offering very well, and his ability to pitch backwards. 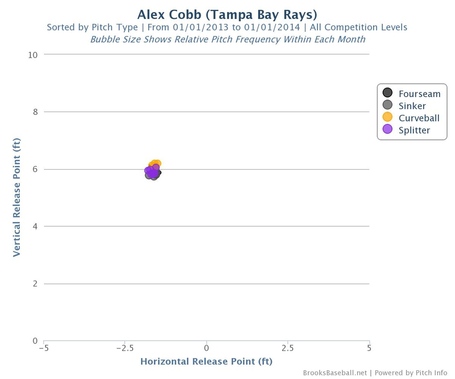 Every pitch Cobb throws comes out of the same arm slot. His release points hardly differ at all; in many ways, you can't even tell where one pitch ends and the other begins. It's a marvelous thing, especially when two pitches are this similar in movement. 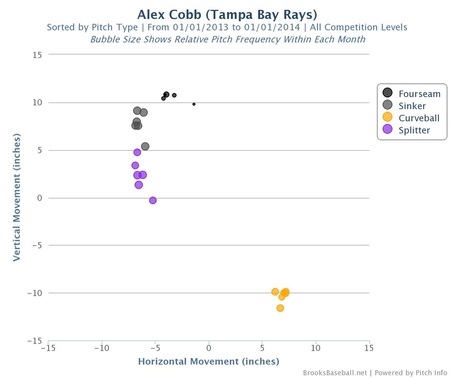 As you can see, Cobb's splitter and sinker behave in nearly the same way. Cobb's splitter has more vertical drop and comes into the zone traveling about 4-6 mph slower than his sinker.

It's a large enough difference when combined with such similar release points to result in a nearly impossible proposition for opposing batters. The two pitches' ability to play off each other so effectively, paired with Cobb's ability to bury both offerings down in the zone, led to such a dramatic increase in swinging strikes. 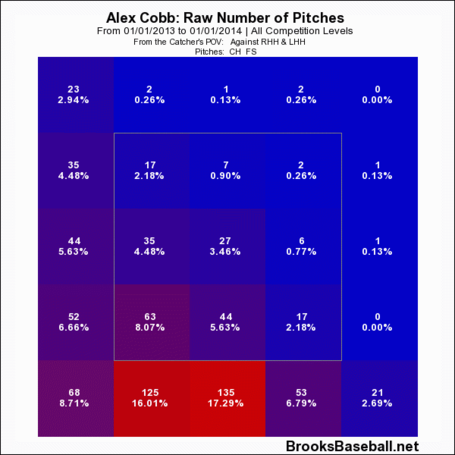 Cobb just buries his splitter down in the zone. It is nearly impossible to do anything with the pitch when it is located down there except hope you hit a grounder that happens to bleed through an undoubtedly shifted Rays infield defense.

While the star of the show is Cobb's splitfinger, his curveball is ever-improving as well. Cobb's O-swing% (swings on pitches out of the zone) increased 4.8% in 2013 to sit at 28.4% for the season. Much like his other offerings, Cobb lives down in the zone with the pitch and does a wonderful job of limiting damage that way.

I mentioned "pitching backwards" earlier. Back in high school, I was a pitcher, and I didn't throw hard. I'm pretty sure breaking glass with my fastball might have been a chore. As a result, I was forced to pitch backwards, throwing changeups and curveballs in any count—especially hitter's counts.

Cobb, who is infinitely more talented than I ever was, does the same thing. 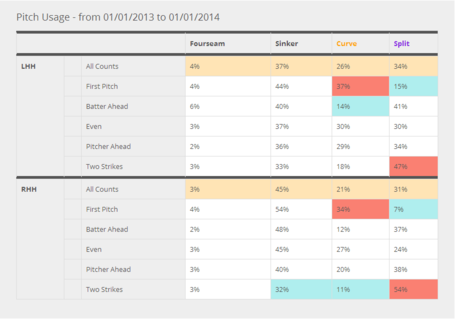 Cobb uses a variation of his fastball the majority of the time as his first pitch versus righties, but against lefties, it's a little more of a guessing game. And it's the same story when the batter is ahead. He'll throw any of his main three offerings without seemingly worrying too much about the count.

Pitchers should have the upper hand most of the time, if not all of the time, because they control everything right up until contact. A pitcher's ability to mix and match offerings and approaches is key to their survival, and Cobb has proven that he is more than willing to alternate his approach in order to fit any situation.

Cobb made improvements in 2013. He struck out more batters. He generated more whiffs. And he lowered his ERA and ERA estimators. The improvements are obvious, but much of the groundwork was already laid.

During his short stint in 2011, Cobb was good. In 2012, he improved in many areas, namely strikeouts and walks, but his ERA took a small step back. There should never have been much worry, though, because his FIP and xFIP were right in line, or better, with his 2011 rates.

In 2013, moreover, we saw Cobb put all of the pieces together. His strikeouts spiked, his walks stayed low, and he generated plenty of groundballs, which find the defense more than they find empty grass. He still has a slight issue with the home run ball, but a 2.76 ERA and 3.36 FIP are great regardless.

Cobb, like most pitchers, does have a platoon split, but his 2013 splits shrunk the gap a little bit.

Cobb's regression back to his 2011 numbers versus left-handed batters is encouraging, and partly due to the factors stated above. Cobb's steady improvement versus right-handed batters should also be noted because holding opposing batters to a wOBA of .265 is very, very impressive.

If not for a line drive off the bat of Eric Hosmer, we'd likely be looking at about 180 innings of stellar work from Mr. Cobb. Unfortunately, we're only left with 143 innings of stellar work. Earlier this week, Dan Szymborski published his list of pitchers that are poised to make a leap forward in 2013 for ESPN Insider. I liked his choices, especially Latos, but I'd like to throw my hat in Cobb's corner.

In fact, one could argue that Cobb has already taken a huge leap forward. You wouldn't get much push-back from me there, but from a mainstream perspective, I believe this will be Cobb's breakout season. Watching pitchers grow and blossom is one of baseball's most enjoyable aspects, and Cobb's maturation into a front-line starter has been an incredible thing to witness.

All statistics courtesy of FanGraphs, Baseball Savant, and Brooks Baseball.