First and worst: Split-finger and cut fastballs of 2013

The last of the series of best and worst pitches of 2013 using z-scores, we look at a pair of hybrid heaters.

Share All sharing options for: First and worst: Split-finger and cut fastballs of 2013

With the final installment of the First and Worst pitch of 2013 series, we look at split-finger and cut fastballs in unison. Both a hybrid pitch and a method of putting a little funk to one's fastball to keep hitters guessing, I pair them here not only because of their similar beginnings, but also for the sake of brevity and sample size, in a sense.

For a quick recap, we will use FanGraphs data on split-finger and cut fastball pitch type linear weights as well as average velocity (vFC/FS), absolute horizontal movement (FC/FS-X), and absolute vertical movement (FC/FS-Z) data to create a z-score for each in order to compare the variables to one another. A summary score (SUM_z) will then be calculated to give a final, single value for measuring the value of each pitch. The 10% criteria will also be used, with only pitchers who threw the pitch at least 10% of the time being considered for our best/worst list. We will also break down our results by starters and relievers.

Thus far, we've figured out who has the best and worst changeups, curveballs, four-seam fastballs, two-seam fastballs, and sliders, and have also had a Fan Post looking at a similar approach in scoring pitch repertoires; let's wrap this up with a quick look at these hybrid heaters.

Before we get involved with the results, a couple of caveats should be noted. First, both pitch results are skewed in a fashion due to their lack of pitchers who throw the pitch and even fewer who threw it at least ten percent of the time. For the cutter, only 38 qualified starters and 41 qualified relievers utilized the pitch; for the split, we find only ten starters and 11 relievers who make the cut based pitching enough qualifying innings. From there, there were 22 and 6 starters who made the ten percent cut for cutters and splits, respectively; for relievers, the numbers were 20 and seven for ten-percenters with a cutter and split. Considering that is but a sliver of data to play with in comparison to the other pitch datasets, we find that it is a small sample to make hide or hair of; given we are using means and those can be sensitive to outliers in data, we are at risk of a large amount of variance in our standard deviations. Cliff's Notes version -- we have results, but there is more noise associated with the bits of signal we are acquiring through the research, so we must be careful making any rash assumptions using said results.

With that in mind, we still see some signal passing the eyeball test, in the form of Kenley Jansen's fantastic cutter and Ryan Dempster's oft-magnificent split. We also find old friend from the two-seamer/sinker installment of the series Mark Buerhle bringing up the rear once again for the starters with his cutter. Once again, we find a disconnect between the numbers -- this time, we see Mat Latos with the best starting pitcher cutter...but to the tune of a 0.382 wOBA against with the pitch, which is a head scratcher.

Could Latos' poor wOBA showing with the cutter be due to it being too similar to his slider, which is in many ways the cutter's big brother, both in how it's thrown and it's behavior? Could the cutter be adversely affecting his slider, making both pitches sort of blend into one another, with less action and bite the result of it? Looking at Latos' wOBA against on his slider, this might not be the issue, if his .210 wOBA against (and 1.31 SUM_Z score) are to be considered.

Let's take a quick look at all of the pitchers who throw both a cutter and slider and do a quick correlation -- is there a possible trend that could make us think that throwing both could be affecting the quality of either pitch? 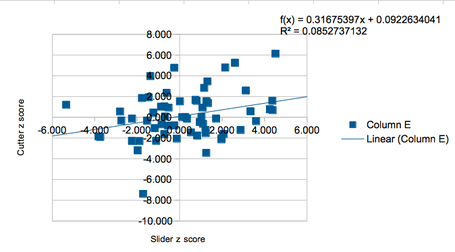 In general, it appears a good cutter does not preclude one from having a good slider, or vice versa; although it's a weak trend as determined by the R-squared score, it looks like a pitcher with a good pitch probably has another good pitch to go with it. Not too surprising.

And that is what I will leave you and this series with; the idea that in a sea of unsurprising quality that can occasionally leave you a tad jaded, every so often, a glimmer of intrigue bounces off the surface that makes us reset our analytic courses to see what could explain the flash. While neither was perfect, I hope the compass and course I set out for this series found you some enjoyable glimmers.