C.C. Sabathia and giving up the long ball

C.C. Sabathia had one of the worst seasons of his career in 2013, giving up a boatload of home runs along the way. Will Sabathia cure his long-ball troubles in 2014 and bounce back in the process? Or has Father Time finally caught up with the left-hander?

Share All sharing options for: C.C. Sabathia and giving up the long ball

2013 was a tumultuous year for C.C. Sabathia and the Yankees. After recovering from offseason elbow surgery, the left-hander had an abbreviated spring training and, to put it kindly, a bumpy season in pinstripes.

Unlike nearly every other Yankee, Sabathia stayed healthy, logging over 200 innings for the seventh straight season. However, nothing was more troublesome -- at least for New York’s immediate prospects -- than Sabathia’s performances on the mound throughout the summer. He struggled mightily in 2013, finishing with 2.7 WAR (the lowest total of his career), his lowest strikeout rate since 2005 (19.3%), and a 4.10 FIP, his highest in 10 seasons.

When looking at Sabathia’s numbers, though, what really sticks out is the extreme 13.0% HR/FB rate he allowed last year. The mark is nearly four percent more than his career HR/FB rate, and in most situations, one would expect Sabathia’s long-ball tendencies to regress significantly back towards league average.

Yet a few circumstances surrounding the big lefty make such an assumption tenuous at best. First, as many have noted over the past 12 months, Sabathia’s velocity is trending in the wrong direction, especially over the last three years: 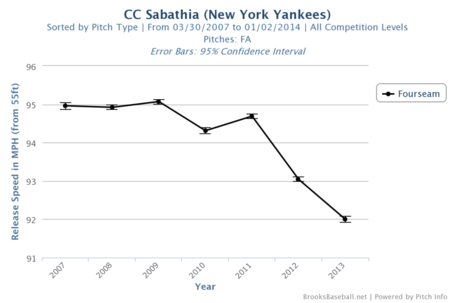 Couple this with his age (he turns 34 in July) and the 2,775 innings Sabathia has pitched (third-most among active hurlers), and there is little denying he is entering the time frame in which pitchers begin to decline, sometimes rapidly.

Even more troubling is that Sabathia had a similarly extreme HR/FB rate in 2012, making 2013 look like less of an outlier than it first appears. In fact, over the past two seasons, Sabathia has the 10th-highest HR/FB rate in the majors. He has given up more home runs since 2012 than pitchers like Ryan Dempster, Jeremy Hellickson, and Mike Leake.

What is difficult to parse out is how much of Sabathia’s long-ball struggles are due to his decline as a pitcher and how much can simply be explained away as fly-ball randomness. Has Sabathia’s velocity decrease left him with much less margin for error, allowing opposing hitters to more consistently square the ball up against him? Or has he simply been the victim of an unsustainable amount of balls leaving the yard?

Well, his BABIP in 2013 was an above-average .308, suggesting he may have allowed more hard contact than normal. But his line-drive and fly-ball rates weren’t that different from his career norms, and Sabathia’s 2012 BABIP (.288) was much closer to league average despite all the home runs he gave up.

In addition, as ESPN Home Run Tracker shows, many of the home runs off Sabathia last season weren’t exactly gargantuan blasts. Just eight of the 28 home runs that Sabathia allowed traveled over 400 feet. Ten of them, moreover, could be characterized as "Just Enough," which means the ball cleared the fence by "less than 10 vertical feet, or that it landed less than one fence height past the fence," according to ESPN Home Run Tracker.

Even so, Sabathia pitches in the homer-friendly confines of Yankee Stadium, a park that has proven to be a poor fit for other Yankee pitchers in recent seasons. That reality is inescapable, regardless of how much improvement we can project for Sabathia in 2014.

Ultimately, the 34-year-old will be an interesting case study in the season ahead. A pitcher’s HR/FB rate is a fickle animal, often shifting and fluctuating at a moment’s notice. Sometimes elevated home run rates portend a hurler whose luck will soon change for the better. Sometimes they simply mean the pitcher isn’t fooling anyone anymore, which makes New York’s burly southpaw even more of a question mark.

One part of me says Sabathia, without any offseason surgery holding back his preparation, is primed for a bounce-back year; the other is alarmed by all the warning signs that surround a pitcher entering his mid-30s. Given how extreme Sabathia’s home-run problems were in 2013, his fortunes on fly balls will likely improve this season.

The question is how much will Sabathia improve, and, factoring in the influence of Father Time, how long will it last?

Alex Skillin is a writer and editor at Beyond the Box Score and also works as a Web Editor for SoxProspects.com. He writes, mostly about baseball and basketball, at a few other places across the Internet. You can follow him on Twitter at @AlexSkillin.