How well do closers perform in non-save situations? Can we observe evidence of the legendary "closer mentality" in those pitchers who perform better in save situations than in blowouts?

Share All sharing options for: The Closer Mentality, Part 1: Closers in non-save situations

At this point, the concept of "pitching to the score" has been thoroughly debunked for starting pitchers, as anyone who followed the Hall of Fame candidacy of Jack Morris can tell you. But few, if any, studies exist looking for this effect in closers.

Growing up as a Red Sox fan, this seemed to be a real phenomenon. Tom Gordon or Derek Lowe or whoever would come into a four-run game in the top of the ninth -- just to get some work -- and give up a couple of runs and a few baserunners before getting that last out on a hard-hit liner right at somebody. Adding insult to injury, I had to endure Mariano Rivera crushing hopes and dreams just down I-95 from middle school on.

If you're the type to put stock in the "closer mentality", this doesn't seem so far-fetched. After Cardinals rookie Kolten Wong was picked off to end a World Series game, he said, "When you get to this level there is no down time, there is no moment to breathe." From that perspective, it's not hard to picture a closer coming into a one-sided game, letting his guard down (even just a little!), and underperforming.

Let's start by looking at the biggest differences for the 2013 season. For purposes of this study, we define closers as anyone with 15 or more saves. We then looked at any time these pitchers entered the game in the eighth inning or later. Of these games, we define a save situation as any time a pitcher could have earned a save if he had pitched the remainder of the game. (Note that this definition includes both holds and what are typically counted as save opportunities, but excludes longer, three-inning saves.) In addition, we define lopsided games as those appearances where a pitcher comes in with his team trailing by at least two runs or leading by at least four (provided the tying run is not at bat or on deck). To start, the five pitchers with the biggest "negative" performance gap, giving up a higher OBP in lopsided games than save situations:

Two comments on this before we look at the results. To get the expected OBP, we can use the odds ratio techniques frequently used by Russell Carleton. First, we find the league's 2013 OBP, the pitcher's 2013 OBP, and the average OBP of every batter each pitcher faced in the game situation of interest. We convert each of these OBPs into odds ratios via the formula OR = p/(1-p). We then calculate the expected odds ratio as (batter OR * pitcher OR)/league OR, and convert this expected OR back into an on-base percentage by the inverse formula p = OR/(1+OR).

Secondly, the z-score given is the two-proportion z-score. We can use this to measure, on a consistent scale, how far apart the save situation OBP and lopsided situation OBP are. And we can see, for instance, that Koji Uehara had a much larger spread in relative terms than Sergio Romo, despite a smaller absolute spread.

Now, we can focus on the pitchers who were better in lopsided games. And it's interesting to note that Edward Mujica and Uehara were promoted to the closer's role in-season -- with no prior closing experience -- and thrived, meaning they will henceforth be known as Established Closers. To say Uehara was worse in one-sided contests is sort of praising with faint damnation: Uehara was nearly unhittable for the three months he spent as the Sox' closer, so naturally, he wasn't as good from April to June. As for Jason Grilli, his place on this list seems a little unfair. Grilli suffered an injury at the end of July, and then spent three weeks building up his strength in a setup role. Those recovery outings accounted for 16 of his 36 batters faced (BF) in lopsided games.

This group is a little harder to pin down. Like Grilli, Rafael Betancourt also suffered an injury midseason and came back from it (at least for a week). But even though he struggled before being shut down, the three save situations he pitched in only contributed 12 of his 73 BF. Jose Veras went from the Astros' closer to the Tigers' setup man at the trade deadline, but it's not like the improved team behind him helped his pitching. The Tigers aren't exactly known for their defensive prowess, and Comerica Park actually favored hitters more than Minute Maid Park in 2013 according to Baseball-Reference.com; maybe he got along really well with Alex Avila.

Now that we've looked at the extreme cases, we need to determine if there's any predictive value in this difference. Do pitchers who underperformed in blowouts one season keep underperforming, or does it even out over time? To test this, we took every closer with at least 15 saves in a season dating back to 2006 and compared their z-scores in consecutive years. 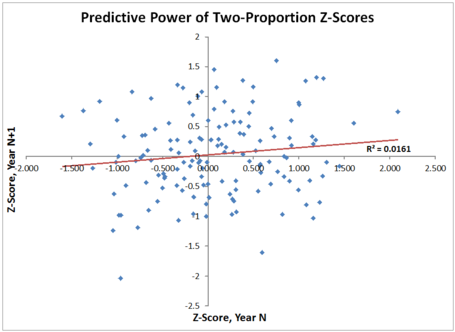 As you probably could have guessed, there's no real relationship to speak of here. Ordinarily, you might worry about selection bias with an experiment like this: perform worse in save situations than in non-save situations, and you won't get too many save opportunities in future. However, a list of the biggest discrepancies for pitchers who did better in blowouts includes seasons by Mariano Rivera, Trevor Hoffman, and Francisco Rodriguez, all of whom were obviously reliable closers for multiple years.

In this article, we showed that, over multiple seasons, closers pitch about the same in save situations as they do in non-save situations. Those arguing in favor of the closer mentality might counter that the difference can be found in how poorly non-closers perform in save situations. But that's another article for another day.

Bryan Cole once earned two saves for his fourth-grade Little League team, and is now a contributor to Beyond the Box Score. You can follow him on Twitter at @Doctor_Bryan.