Share All sharing options for: Success rates for Triple-A prospects based on walk and strikeout rates

This is the third and final time I will look at historical walk and strikeout rates for prospects. If you followed my previous installments, much of this will look familiar to you; however, these results are more complex and different. For those who are new, the basic premise is this: how likely is it that an offensive prospect succeeds in the major leagues based only on his minor league walk and strikeout rates?

First, I compiled the minor league numbers for all Baseball America top 100 offensive prospects from 1990 to 2007. I stopped at 2007 to allow enough time for the player to achieve MLB success. I only included top 100 prospects to add in a form of scouting to the picture. Stats and scouting should work hand-in-hand and an analysis similar to this can help augment a scout’s evaluation of talent. Next, I compared each prospect’s walk and strikeout rate to the league average that year, creating BB+ and K+ metrics. Finally, I compared the walk and strikeout rates at various ages and levels of prospects in the minor leagues to their career MLB FanGraphs Batting runs. Batting runs are calculated using wOBA linear weights and adjusting for park effects. Basically this gives us the total runs above average that the player produced on offense, after adjusting for park.

The Oakland Athletics and their drafting struggles 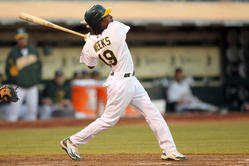 The Oakland Athletics have been one of baseball's best franchises since the turn of the century. But despite being a small market team that eschews big spending, their success hasn't been built on the amateur draft.

Here are the historical results for prospects in Triple-A, split by BB%, K%, and age. 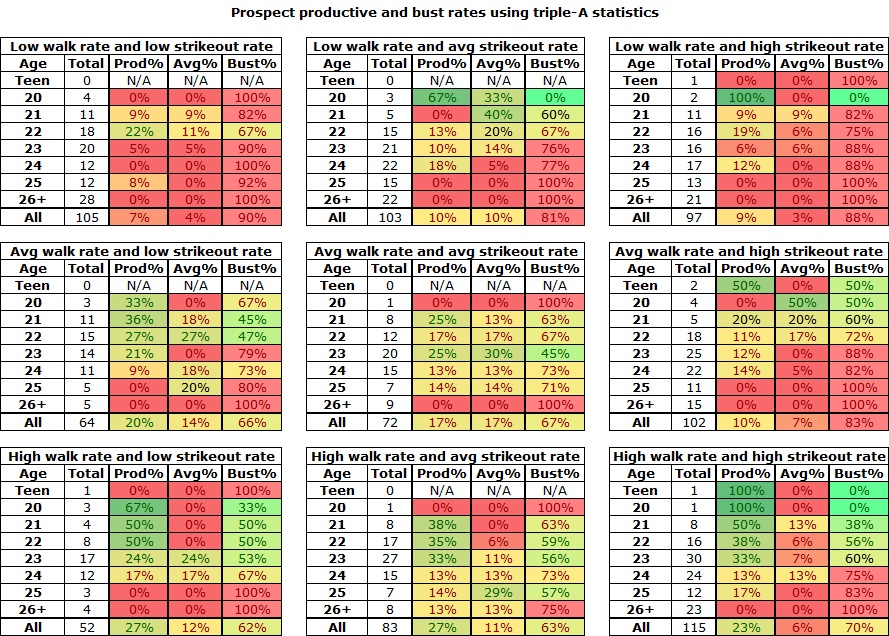 Finally, we reach the top level in the minor leagues. Many teams eschew sending prospects to triple-A, instead calling them up directly from double-A. I find this extremely offensive, as the only professional baseball park in a seven-hour radius from me is the home of a Triple-A ball club.

When I first calculated these numbers, I did my best to only include minor league numbers from players before they reached the major leagues. Many players travel back and forth their first year or two or get sent down on rehab assignments. These numbers should not include the statistics gathered after a player lost his rookie eligibility.

The top productive players in AAA follow a similar pattern to those in AA, but it becomes even more important to have a high walk rate. Players with a high walk rate are the only ones to become more productive on average. Conversely, hitters with low walk rates are at a huge disadvantage. Those with average walk rates are much more dependent on the quality of their strikeout rate.

Each of these categories is also dependent on age. Younger prospects in their early 20s are much more likely to still become productive, despite a poor approach. 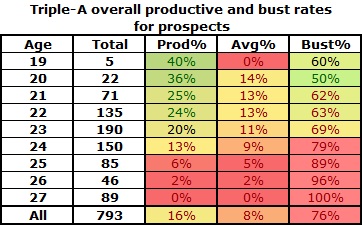 The chance a prospect becomes productive based solely on their age in AAA is constantly decreasing. The youngest prospects have a much higher percentage, while those in their mid-20s plateau around 20-25%. Once a player turns 24 or 25, they have fallen dangerously close to becoming a non-prospect or 4-A player.

Here is the list of productive MLB hitters who were on a prospect list and played in AAA at the age of 25 or 26, before losing their rookie eligibility in the majors: Brian Jordan, J.T. Snow, Jeff Conine, Josh Hamilton, Lyle Overbay, Mike Lowell, Ryan Howard, and Travis Hafner. It’s not impossible for an older minor league player to become productive, but it is rare.

How do 2013 preseasons consensus top 190 prospects and select draft picks that played in Triple-A this year stack up in this analysis?

Profar, Singleton, Franklin, and Bogaerts all rely on very small samples for their percentages. Of those four, Singleton has the worst approach, and he still needs to bring down his strikeout percentage a bit. However, a high BB/high K approach is still acceptable.

Springer and Pillar improved their stock in AAA after having a lower productive percentage from their time in AA. Springer’s High/High approach looks even better at the higher level, since he was able to keep his good walk rate against better competition. Much has been spoken about his excessive strikeouts, but as long as he can continue to walk enough, I don’t foresee any problem with him acclimating to the majors.

Bogaerts decreased his percentage from AA, but both percentages come from fairly small samples. Suffice it to say, regardless of the level, a lot of walks and a manageable amount of strikeouts leads to good hitters’ counts and productive plate appearances.

Taveras lost basically all of 2013 to injury and that shows up in his approach. While his 12% K rate was in line with what can be expected from him, he walked only 5% of the time this past year. Taveras’s career minor league walk rate before 2013 was 8%, and that is a much more likely outcome from him. With an 8% walk rate and 12% K rate at age 21 in AAA, Taveras’s productive percentage would be 20%. The only thing that brings this percentage down a bit is that his walk rate is on the border of average and low.

At the bottom of the chart, we find the oldest players on this list: Urrutia, Garcia, and Ruf. Two were international signings and the third is another older Phillies prospect, ala Ryan Howard. None are expected to provide anything more than major league depth and I don’t suspect we have the second coming of Travis Hafner in any of the three.

Triple-A is the final level a prospect can master before reaching the main stage. It is filled with busted prospects and minor league lifers, but also talented young players ready to contribute. By viewing these players’ approaches, we can gain a better outlook as to which ones truly have the capability of becoming productive major leaguers.

Which other players in Triple-A caught your eye this year?