Ubaldo Jimenez saw a bit of a renaissance in 2013 after a truly terrible 2012 campaign saw him produce at roughly replacement level. One reason for Jimenez's success: his unique approach to pitching in various situations. How did he tailor his approach to each unique situation?

Dan Brooks wrote a piece for Baseball Prospectus in which he announced a new feature on BrooksBaseball.net, allowing pitch usage to be sorted by RISP. If you've read my posts previously, you'll know that pitch usage is one of my favorite tools on the BrooksBaseball site, and this new filter allows for even more customization and deeper understanding.

This one example is powerful in itself, but it also alludes to another interesting nuance. Jimenez's approach is unique, and strangely elegant when you consider the situations he finds himself in.

Generally speaking, a good pitcher is one who sees at-bats end in one of a predetermined set of outcomes. Also generally speaking, two of the best outcomes for pitchers are strikeouts (surprise!) and ground balls. Even though ground balls go for base hits more often than fly balls, they go for extra base hits less frequently. Strikeouts are good because well, it's a strikeout, which is almost always an out.

Jimenez seems to understand this based on his pitch usage. First, let's take a generic look at how Jimenez approaches at-bats (not filtered by RISP). Left-handed hitters see a fastball 18% of the time, a sinker 34% of the time, and a cutter 1% of the time. That means that there's roughly a 53% chance that a left-handed batter will see a hard pitch on the first pitch of an at-bat. Right-handed hitters have a slightly more traditional breakdown, with first pitches coming in as 26% fastballs, 37% sinkers, and 1% cutters. That adds up to a roughly 64% chance that the first pitch will be a hard pitch, as you might expect.

We can already see that Jimenez likes to pitch backwards. The above percentages mean that there is a 47% chance that the first pitch to a lefty will be a slider, splitter, change up or curveball. For righties, that percentage is slightly lower at 36%. Fellow BtBS writer Chris Moran previously explored pitching backwards and its virtues, an article that provides some insight into why this works for Jimenez.

Jimenez doesn't just pitch backwards though. Previously, we identified that the two outcomes Jimenez shoots for are strikeouts and ground balls. If Jimenez falls behind the batter, it becomes less likely that he will be able to bounce back and strike them out. As a result, Jimenez alters his approach and throws pitches that are likely to get ground balls. If a left-handed hitter gets ahead of him, there is a 79% chance that a groundball inducing pitch will be coming next. That comes in the form of sinkers (51%), sliders (14%), and splitters (14%). Right-handers have a 77% chance of seeing one of those three pitches, though their breakdown is dominated by sinkers (50%) and sliders (25%) rather than splitters (2%). This is Jimenez pitching to the situation, and there isn't much getting around that. Each of these pitches has varying success at inducing grounders, but, in general, all three are effective. His sinker gets induces ground balls on 49.71% of the balls put in play, the slider comes in at 38.96%, and the splitter 52.44%. 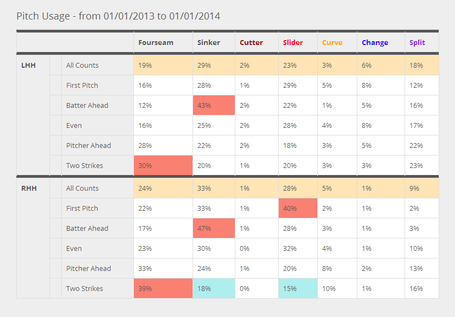 Another notable trend is that Jimenez's fastball usage spikes with two strikes, while his sinker usage takes a nose dive. In this scenario, a strikeout is tantalizingly close, and Jimenez wants to use the pitch that has the best chance of getting that final whiff. His fastball does just that nearly twice as well as his sinker, with the fastball generating whiffs on 21.48% of swings, compared to just 11.32% for the sinker. It's interesting to note that his slider usage to righties drops, but he does pickup his splitter usage as the count goes on. Since his splitter get whiffs on 32.60% of swings, it makes a nice compliment to the slider which generates whiffs on 30.80% of swings.

The data also seems to suggest that Jimenez makes a concerted effort to avoid sacrifice flies. Jimenez's fastball gives up line drives and fly balls far more often than his other pitches. As a result, he avoids throwing it unless he's ahead in the count with a runner on third who could easily be driven in by a fly ball. There's only a 6% chance that a lefty will get a first pitch fastball with a runner on third. Right-handed batters don't have it much better, with just an 8% chance of getting that fastball. Your odds don't improve much getting ahead in the count either, as lefties get 8% fastballs when ahead, while righties get a modest bump to 9%.

In fact, left-handed batters coming up to the plate against Jimenez with a runner on third have only a 9% chance of seeing a hard pitch. In this situation Jimenez threw 6% fastballs, 3% sinkers, and 0% cutters. That leaves you with a 91% chance of seeing a slider, curve, change up, or splitter.

If you're a righty, you have a little bit better odds. There's an 8% chance you see a fastball to start the count, a 16% chance it's a sinker and a 70%(!!!) chance that you get a first-pitch slider. For context, let's take a look at the number of pitches these percentages made up. Jimenez faced this situation exactly 37 times last season. Three times he started off the at-bat with a fastball. Six times it was a sinker. Once each, the batter was treated to a curveball and change up. The other 26 at-bats started off with the right-handed power pitcher delivering a slider.

Digging through various situations (for example first and third, pictured below) shows just how nuanced Jimenez's approach is. Some of his pitch usage charts are very colorful, with blue and red boxes all over the place. 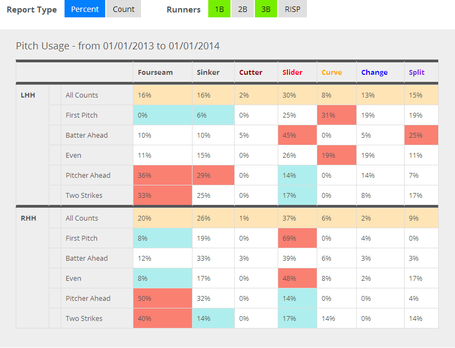 This is interesting for a number of reasons. Early in the count with runners on the corners? Odds are you're not getting a fastball, regardless of which side of the plate you swing from. If you're a lefty though, there's a 31% you'll see a first pitch curveball, and even a 19% chance you'll see one if the count is knotted up at 1-1. If you're ahead, or behind Jimenez though? Well, he throws exactly 0% curveballs in those situations.

Right-handed batters on the other hand can rest easy knowing that a splitter is not coming on the first pitch. If the count is even though, there's nearly a 1 in 5 chance that Jimenez will deliver one.

Ubaldo Jimenez displays one of the most nuanced approaches that I've ever seen. Generally speaking, many pitchers customize their approach depending on handedness of the batter and even the count. What you don't typically see, however, is a pitcher with a repertoire like Jimenez who uses his pitches in such specific ways. This new tool from Brooks Baseball has opened up a world of possibilities for understanding how pitchers approach various at-bats. Ubaldo Jimenez already seems to be one of the most interesting test cases.