Clayton Kershaw recently signed a record-breaking 7-year, $215 million contract. How will that affect the trajectory of salaries?

I'm always on the lookout for things to write about, as well as promote folks I follow on Twitter, and this tweet from High Heat Stats accomplished both:

The most incredible thing about this: on the linear scale, player salaries were essentially zero until the mid 1970s pic.twitter.com/mhumvNQcU2

The link in the tweet is live but I'll recreate the table anyway--it looks like this and is adapted from data found at this SABR page: 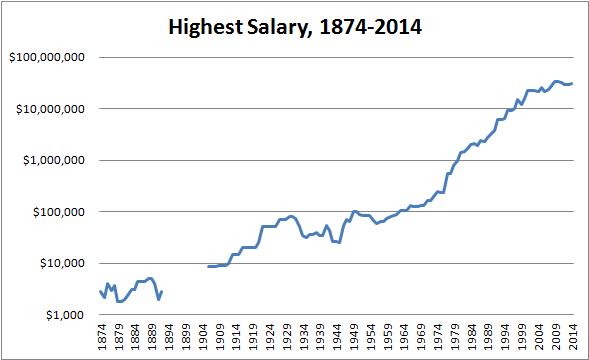 Clayton Kershaw's contract structure can be seen here and averages around $30.7 million per year through 2020. I'm not going to discuss whether Kershaw is worth it or not (I think he is) because by the time you read this it will have been discussed to death, but instead look at salary trends to see where they might be headed.

In the good old days, increases in salaries were driven by multiple leagues. The rise of the American Association in 1882, the Union Association in 1884 and Players League in 1890 caused brief spikes in salaries, and when the AA disbanded and the stronger teams absorbed into the National League in 1892, salaries plummeted. The graph doesn't show it, but a similar run-up in salaries occurred with the formation of the American League in 1901 and the Federal League in 1914, with similar drops after those leagues were either accepted or disbanded.

Free agency changed this in the mid-1970s, along with aggressive owners like George Steinbrenner willing to bid up the price to acquire talent. I'm sure it's been written about, but I wonder if Steinbrenner could have been Steinbrenner without the ability to spend as freely as he did. He became an owner in 1973, just before the free agency era, so we'll never know.

Is there an upper limit to salaries that no team will cross? Every other mark has been eviscerated over time--the $1 million barrier by Nolan Ryan in 1980, $10 million by Albert Belle in 1997, and $20 million by Alex Rodriguez only 4 years later in 2001. In that time span, revenue streams increased and expanded as new mediums like the Internet and expanded advertising opportunities created revenue that hadn't existed before.

1. TV deals will all be like what the Dodgers and Mariners have

Point 2 is predicated on point 1, since only if revenue dramatically increases can a $100 million salary be even remotely justified. All new TV deals will not be like the Dodgers, Mariners or Rangers, and the Cubs will be the test case of what a major market team can command in the new media marketplace as they negotiate new TV and radio deals in the next couple of years. The notion that big contracts can be justified by simply increasing the carriage fees on the cable companies is already being put to the test.

The law of large numbers is already coming into play with player salaries--it's more difficult to build increases on bigger numbers than small, and before $100 million is discussed it makes sense to see who might be the first $50 million player--Mike Trout? I did a check of players 25 or younger to see who might be worth it when they reach free agency, and Trout's name is the only one I can come up with, absent the next big thing from 2014 or 2015.

I can tell you who it won't be--people like Josh Hamilton, Prince Fielder, Robinson Cano or Albert Pujols, players who reach free agency around age 30 or so. Players like this may still get very lucrative contracts, but I'm convinced the smarter GMs of today already realize big contracts for players in their 30s pays for past performance instead of future value. There will always be anomalies, but I seriously doubt a player like this will be the first to crack the $50 million barrier.

I'm conflicted on whether it could be a pitcher, since I can see it both ways. Strictly speaking, a top-flight starting pitcher faces around 1,000 batters a year, whereas a hitter makes around 650-700 plate appearances. Whether this can be viewed as equivalent is for others to say, but the reliability of pitching arms lasting as long as their contracts is becoming a real issue. Greg Maddux and Randy Johnson didn't retire all that long ago and yet it seems like they're dinosaurs of old, men who racked up big inning counts over a long career span. The modern pitchers like Kershaw, Chris Sale, Felix Hernandez, Justin Verlander and the like seem more like the crash-and-burn types, players who will be among the best in baseball but don't last. I'd like to be wrong on all of them and we'll see soon enough.

Two very important trends over the past 30 years have or are reaching their conclusion, the movement of the Baby Boom Generation (of which I'm at the tail end) through their prime baseball-attending phase during their 30s and 40s and the economic expansion that occurred from around 1982-2007. The next generation of baseball fan needs to be coming online to replace old people like me and new revenue streams will need to be created to generate income growth. These will be the primary determinants of if and when the first $100 million player is minted.

Special thanks to High Heat Stats for the idea and the permission to run with it, as well as informing me about the SABR article referenced in this post.

Scott Lindholm is a web columnist for 670 The Score in Chicago and can be followed on Twitter at @ScottLindholm.