A projection of the most efficient starting lineup for the offseason-prodigal Texas Rangers through analysis of the projected starting eight's offensive production capabilities adjusted according to potential slotting in the batting order.

In my Lineup Efficiency series, I will project clubs' most efficient starting lineups for the opening week of the upcoming season, incorporating current offseason acquisitions, through analysis of offensive production capabilities adjusted by placement in the lineup, while factoring in a minimum defensive effectiveness with regard to placement in the field.

After four notable acquisitions through trade and free agent markets this offseason, and the loss of four every day starters by the same means, the Texas lineup will be largely reshaped for the upcoming season. In declining to re-sign Lance Berkman, Nelson Cruz, and A.J. Pierzynski, Texas and general manager Jon Daniels were able to make the off-season's first big splash - sending second baseman Ian Kinsler to Detroit in exchange for (spoiler alert) designated hitter Prince Fielder. 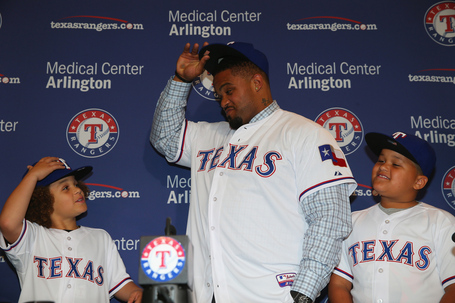 With the Tigers moving one of baseball's biggest contracts, is it time we start to think differently about what those massive deals really represent?

The Rangers add to their scary lineup by signing Shin-Soo Choo, but did they overpay for the 31-year-old outfielder?

The trade was followed by a series of smaller pickups in outfielder Michael Choice (trade with Oakland) and catcher J.P. Arencibia (free agency) before the club landed premier free agent outfielder Shin-Soo Choo (seven years, $130 million). As a result, Texas has likely not only assembled the American League's most potent offensive lineup (as always - on paper), but has also become a preseason favorite to win the pennant.

Texas was among the league's most dangerous offensive clubs this past season, hitting .262/.323/.412 over the course of their 163-game season. Although something can be said for playing 82 games in the league's second most hitter friendly park (according to FanGraphs Park Factors), the club was not overly dependent on playing long ball at home - 9th most home HRs, but only four less would be a drop into league's bottom half - as some Texas clubs have been in the past.

In projecting the lineup for the upcoming year, it's necessary to first address the requisite defensive positioning of an everyday starting eight. The infield will see only slight adjustment on the right side as 2013 primary first baseman Mitch Moreland (should) stay at first base, allowing Prince Fielder (-5.2 UZR, -13 DRS) to begin his necessary transition to designated hitter (a role previously headed by Lance Berkman, 65 starts). With the departure of Kinsler to Detroit, the club has freed room in the every day lineup for 21-year-old Jurickson Profar - who should settle in nicely at second base after platooning throughout the lineup for 85 games last season (32 G at 2B, 20 at DH, 18 at SS, 10 at 3B, 4 in LF).

Profar's shift to second keeps the left side of the infield untouched, with Elvis Andrus at short and Adrian Beltre at third, where both played 146 games in 2013. Further, Pierzynski's departure for Boston will create opportunity for Geovany Soto to start a full season worth of games, with J.P. Arencibia serving in a backup capacity and potentially seeing some time as a designated hitter. 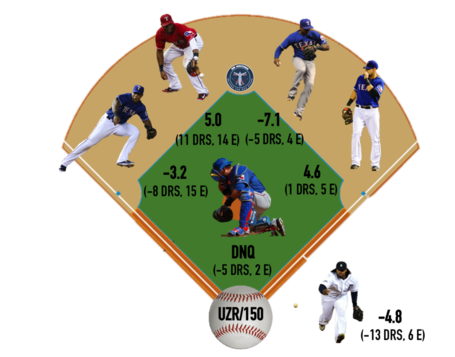 The roster also provides sufficient depth for lineup adjustment based on the handedness of opponent starting pitchers, and there arises two distinct possibilities (only one recommended). Although against left-handed pitching the lineup could shed a left-handed bat by sitting Moreland, slotting Fielder at first, and dropping Arencibia's right-handed bat into the lineup, a problem lies in Moreland being arguably more effective against LHP than Arencibia over the course of their careers depending on what type of production in which you are interested.

Although somewhat unrealistic, it should be offered as a possibility entirely dependent on Moreland's performance against LHP. The second, more realistic move that should be made against left-handed pitching would be to insert newly acquired Michael Choice into left field in place of Leonys Martin's left-handed bat in center, shifting Choo to center. Texas has a wealth of replacement outfield left-handed bats (Engel Beltre, Jim Adduci) in addition to Choo and Martin, but the club's move to get Choice from Oakland and his high (108 Steamer/101 Oliver) projected wRC+ should create opportunity for time in the third outfield slot. With Choo in LF when Martin plays/CF when Choice plays, and Rios in RF, Texas - like most clubs - will continue to platoon but between Martin (primarily) and Choice, and has the opportunity to make the decision based on performance against pitcher handedness because all four probable starters are capable defenders. 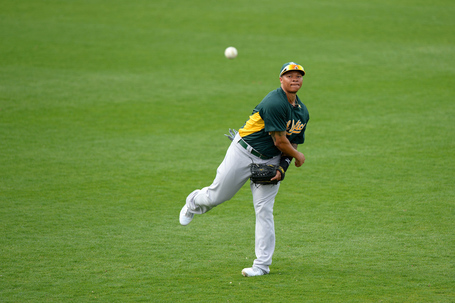 Turning to the lineup, the Texas roster allows assembly of an order crafted somewhat accordance with The Book - with a singular exception. To begin, we'll dip into the BTBS archives for a quote from a March 17, 2009 article entitled Optimizing Your Lineup By The Book, in which Sky Kalkman simply offered regarding leading off: "OBP is king."

Needless to say, Choo will be hitting #1. Where this lineup may "deviate" from the Book, however, is an alternate interpretation of the idea that a club's "best hitters" should bat #1, #2 and #4. The question (and answer) that drives this disagreement is, "who is a better hitter: Elvis Andrus or Prince Fielder?" Most tend to believe Fielder is a better hitter, however, because Beltre is a better hitter than both (and will accordingly bat #4), and because a #2 requires a semblance of "bat control" (more of an old-school thought) in addition to a high OBP, Andrus (as most will probably agree) is better suited for the #2 than Fielder in my view. For evaluation of bat control, I direct attention primarily to two stats - strikeout percentage with two strikes and contact rates (think Placido Polanco).

Although Fielder's career wOBA (.388) dwarfs that of Andrus (.310), Andrus' bat control and 13.4 career K% (Fielder, 17.5%) make him a better fit for #2 in a more traditional sense. Where The Book would probably slot Choo, Fielder, Rios, Beltre and Andrus #1 through #5, having a Fielder-caliber HR threat hitting second in Texas would defy common logic. After the #1, #2 and #4 hitters are in place, typically the better hitter would be placed #5; however, with Fielder not well-suited for #2, and with the #5 slot having a higher run expectation advantage over the #3 for everything but home runs, Fielder should slot #3 in front of Beltre because he projects to be a massive long ball threat in Texas.

With the top five hitters on the roster locked in, the remaining spots should be filled with bats in order of decreasing ability, taking into account both the need to avoid grouping left-handed bats and keeping speed out of the #7 and #8. American League teams also have the blessing of not having to bat pitchers, and accordingly, there lies potential in batting the least productive #8 and a player who is not being unduly slotted low #9, but rather a young, volatile bat with both speed and a low weighted runs created in order to generate momentum in turning over the lineup. Although essentially statistically insignificant, the same can hold true in the National League where batting a pitcher #8 instead of the traditional #9 has been shown to be worth about two runs per season.

In conclusion, through both free agent signings and trades, the club has both maintained stature as a perennial contender in the AL despite losing a large block of offensive protection. The trade for Fielder replaces the assumed loss of Nelson Cruz, and the addition of Choo fills both an outfield and lead-off need, bringing one of the league's most overall productive offensive players to Texas. With continued near-ceiling production from Rios, and the opportunity for players like Profar and Soto to thrive with more stability in the lineup, general manager Jon Daniels has molded a spring training powerhouse - capable of separating themselves in baseball's toughest division.