In an age of advanced thinking, the next thing to go needs to be inning limits.

Share All sharing options for: Death to innings limits

It seems like every time a young promising starter is brought up, there will always be a discussion on how many innings he can go for. It's an age old story and one that has become standard procedure in the game. Yet, despite conventional beliefs, this archaic way of thinking remains. While the intention behind the idea is sound, the execution could use some work. Change is necessary.

The intent for limiting pitcher innings is to keep them healthier and effective for longer periods of time. However, there is a better approach to doing so. First, we must understand that innings do not accurately account for the pitcher's well-being; in other words, innings themselves don't directly harm a pitcher, but the amount of pitches can. Logically, it would make sense to look towards a more "pitches-thrown" limit - monitor the number of pitches thrown in a season, rather than rely on an indirect measurement of innings.

The inning itself does not tell us how many pitches those outs took. Not all innings are the same and the amount of pitches needed to complete an inning can drastically vary from pitcher to pitcher, or inning to inning. Pitcher A could have had an easy 1-2-3 inning and throw only 15 pitches. But Pitcher B could allow bloops, walks, or bean every hitter he faces, and require 20 pitches. At the end of the day, both show an inning pitched, despite having taken drastically different paths taken to get to that IP. 5 pitches may seem insignificant, but laid out for an entire season, that number can balloon to as many as 1000+ pitches. All of these excess pitches can add up and reduce the overall efficiency of the pitcher and the team. With this fact in mind, basing pitch limits on Innings doesn't make sense.

Let's look at Matt Moore as an example. He's a high strikeout, high walk pitcher, which leads to higher pitch counts. Since the start of 2012, he's 17th among qualified starters in highest pitches per inning pitched at 17.25 in only 327.2 IP. If Moore were to keep this pace over 200 innings, we're looking at around 3,400 pitches needed to complete a season. To put that number into context, there were only 10 pitchers able to handle that workload in 2012 and 11 in 2013:

Of all the pitchers listed, only C.J. Wilson is in Moore's range in terms of efficiency, or lack thereof. Maybe Moore can be a Wilson 2.0 or improve and be one of the aforementioned going forward, but the odds are stacking against it. Despite the Ray's efforts of using innings limits on him, he's already dealt with elbow issues and his velocity has been on the decline as shown below: 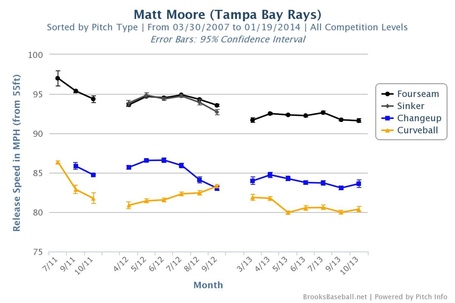 Inefficient pitchers don't usually last long enough for inning limits to be discussed, but efficient pitchers usually do. This raises the question: why should pitchers be restrained if they're doing their job efficiently? It's counter intuitive, considering an efficient pitcher can pitch more innings using less pitches, hence less strain on the body.

Enter Chris Sale. Despite all the concern about his durability, he's run with the job since becoming a full time starter in 2012. Over the past two seasons he's totaled 405.1 IP and 9.8 fWAR, not bad for a pitcher whom everyone expects is about to lose an arm, due to his unorthodox mechanics and slim frame. The key to his success has been efficiency in attacking hitters; in 2012 he managed 15.67 P/IP and lowered that mark to 15.17 P/IP in 2013. On top of it, the overall results are very similar; in most measurements, he even showed improvement to the year before. Not only was he able to be as efficient in the quality of his innings, but he has also pitched much deeper into games. In 2013, he ranked 3rd in most innings per start at 7.14, only behind Clayton Kershaw's 7.15 and Cliff Lee's 7.17. In comparison, Moore ranked 86th of 92 pitchers at 5.56; you can find all of the rankings here. By the looks of things, Sale is well on his way to becoming a workhorse, not because of gaudy pitch totals, but rather he's learned how to get hitters out quickly.

The takeaway is that inning limits is a flawed measurement that doesn't tell the whole story for a pitcher; this can also have adverse effects on the team he represents. Let's bring up our hypothetical pitcher A again. Pitcher A is limited to 175 innings, but is only at 2,500 pitches on the season, making him a highly efficient pitcher. Nonetheless, the team decides to shut him down and give his starts to a replacement level pitcher. As a result, the team misses the playoffs by one game. To make matters worse, it's the first time in a decade the franchise has had a shot at a playoff berth.

It's not a stretch to say Pitcher A could have pitched 2+ more games, but it's not a guarantee he wins them those games; chances are he gives them a better shot than a replacement level pitcher. Unless pitcher A has shown reason for doubt, there should be no reason to hold him back. Because of a flawed ideology, an entire season's work is lost and a fan base is in uproar because of management of the situation.

Limiting pitchers by innings might lessen the problem, but does not actually address the problem directly. The intent is to reduce injuries, but pitchers don't throw innings, they throw pitches. I can't say for certain what parameters a season pitch count should be held to, but based on looking over recent seasons, between 3,000 - 3,300 pitches seems to be the range for established pitchers. In young pitcher's cases, it's between 2,600 to 2,800 pitches. These numbers need further research by more qualified individuals, such as those interested in biomechanics, but hopefully, this article can at least get the ball rolling.