Was Michael Wacha tipping his pitches? A follow up

An attempt at showing that Wacha is, in fact, tipping his pitches.

About three months ago I penned an article on Michael Wacha tipping his pitches, or in other words, using different arm speeds on different pitches. At the time I made my case without having any proof, though I did have a pretty strong feeling it was happening. Wacha, then proceeded to make me look good by pitching poorly against the Red Sox during Game 6 of the World Series.

Interestingly enough, the Red Sox managed to not only swing and miss fewer times at Wacha's previously devastating changeup, but also hit it hard when they made contact. The four games he pitched prior to Game 6, Wacha's changeup had whiff rates of 24%, 27%, 17% and 18% , against the Red Sox it was a lowly 9%. The cold weather couldve played a large roll in Wacha's lack of success, as his fastball was 1.5 MPH slower than against the Dodgers. This could have also been an attempt by Wacha to try and release his pitches with similar arm speeds. 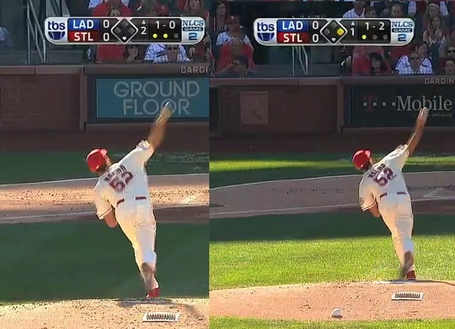 In any event, while I wouldn't exactly call this evidence, it definitely is helpful information. Looking at stills, there happens to be a clear difference between the way Wacha's arm looks when delivering his fastball and when delivering his changeup. I then looked at a couple other pitchers with good fastballs and good changeups to see if a similar disparity existed, or if this was just Wacha.

Well isn't that something, Wacha's arm is clearly less blurry, a sign of moving slower, while releasing his changeup. Cole Hamels and Stephen Strasburg, show no such disparity. If anything, their arms look a smidgen blurrier during their changeup release.

Again, this definitely cannot be considered proof, but in the absence of high speed cameras and any other way of discerning this type of information, the analysis of stills can be useful to an extent. I am not advocating the use of stills in order to do anything definitive, but in cases so extreme as Wacha's, it can paint a slightly clearer picture than what we previously had.

All statistics courtesy of Brooks Baseball.

Ari Berkowitz is a writer at Beyond The Box Score. You can follow him on Twitter at @wildpitches.