How has sabermetrics changed baseball?

Share All sharing options for: How has sabermetrics changed baseball?

In 2001, Voros McCracken published one of the most seminal theories in the relatively short history of sabermetrics. His article, Pitching and Defense, How Much Control Do Hurlers Have?, proclaimed that pitchers have little if any control on what happens to a ball that is put into play by an opposing hitter. Certainly that was nonsense; better pitchers force the opposition to make weaker contact and thus give up fewer hits on balls in play. At least that's what the conventional wisdom had said for over 100 years of baseball analysis. That is, until Mr. McCracken decided to run the numbers and proved that there was very little difference in the amount of hits on balls in play between pitchers, regardless of their overall talent level. Furthermore, pitchers didn't display much of an ability to repeat their performance in the area, meaning that random variation was really the driving force behind BABIP. While we now have a slightly better understanding of the relationship between pitchers and BABIP (and teams are probably well past the public in this area thanks to tools like HITf/x), DIPS was and remains one of the most earth-shattering revelations that the saber-community has seen.

Not only did it change the way that we evaluate players, but it also stressed the importance of racking up strikeouts while limiting walks and home runs from a pitching standpoint, which actually changed the game. Look at the prior to and following the publishing of the article at Baseball Prospectus:

Strikeouts (in terms of rate) have gone up and walks have gone down for each of the last five seasons, while home runs have stayed relatively the same. Undoubtedly there are other factors at play here -- rising velocities, catcher framing, etc. -- that contribute to these totals, and yet it's hard to completely ignore the article itself as a direct influence. Not only do numbers improve our understanding of the national pastime, but quite often they also shape the game into something slightly different. So is understanding baseball actually making the product on the field less enjoyable?

We can (and should) continue to put a premium on pitchers that can miss bats at the big league level, but at what point do rising strikeout totals cause baseball to be unwatchable? Hitters facing Craig Kimbrel and other top closers already can flip a coin as to whether or not they'll be set down on strikes, and there doesn't seem to be an end in sight to the whiffs. Although I enjoy watching Clayton Kershaw fan 12 hitters in a game as much as the next person, I also enjoy watching Mike Trout run down a ball in the gap, or Manny Machado come up with that next-to-impossible backhand. If strikeouts continue to go up, there are going to be fewer and fewer web-gems.

DIPS isn't the only example we have of this phenomenon. Likely the most well-known saber-book is 2003's National Best-Seller, Moneyball: The Art of Winning an Unfair Game by Michael Lewis. As many have outlined before, the book was chiefly about the exploitation of market inefficiencies and the ability to win games as cheaply as possible, rather than a bunch of saber-principles. Still, the book has long had a reputation of preaching the importance of on-base percentage and seeing a lot of pitches. Unfortunately FanGraphs only has data on pitches for batters since 2002, though that will still give us some indication on whether or not it's been trending up since the book was published: 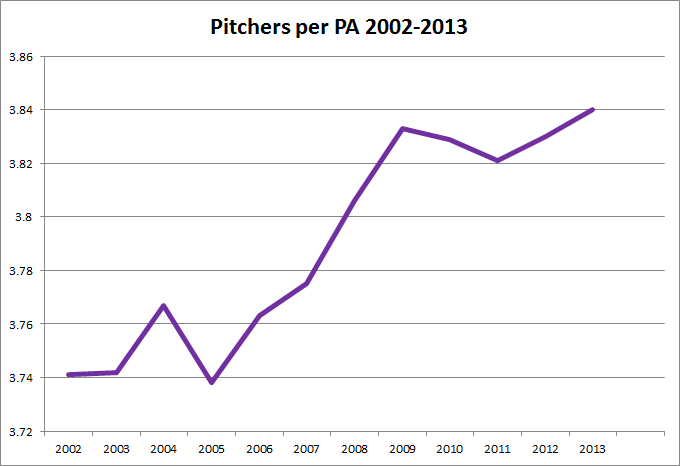 Again we see that the theory outlined in the book has been brought to life across the league. While more pitches per plate appearance might not immediately seem like a bad thing, which is one of the many reasons that average game times have been trending upwards in Major League Baseball. According to MLB.com, the average time for a nine inning game in the 1970s was two and a half hours, in 2000 it was around two hours and 45 minutes, and recent years have seen the game times approach the three hour mark. Hardcore baseball fans probably don't mind the extra time, but the trend isn't going to help attract new fans or keep the casual observers coming back for more. That fact is especially true once you realize that the three hour game times include less than 18 minutes of actual action. Is sabermetric analysis partially to blame for matchups that drag?

Even statistics and theories that might not add value to our understanding of baseball still can have drastic effects. Introduced as an official statistic in 1969, the save has changed the way that managers handle their bullpens. Gone are the days of mult-inning outings to finish games along with 100+ inning relievers. In their place we find LOOGY's and overcrowded bullpens. Back in 2012, BtBS's James Gentile examined the shortening outings of relievers, presenting the following graph: 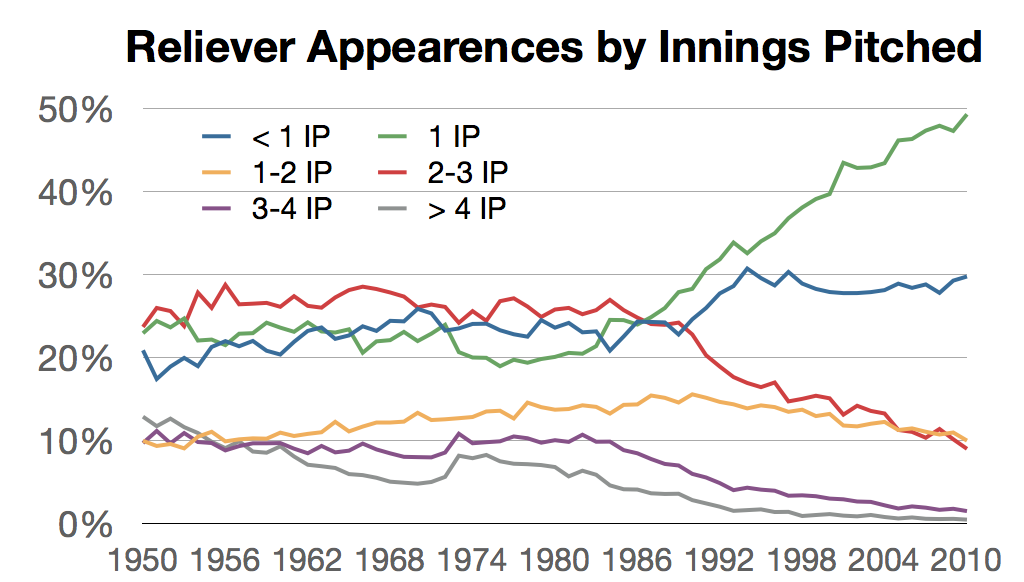 One inning outings by relievers have experienced a drastic shift in frequency since the 1980's, not long after the save was first tracked. Silly as it might seem, the mere introduction of a new metric -- one that provides little if any predictive or analytic value -- essentially created a whole new position, the closer. And despite public objections, teams have continued to pay top dollar for players that have earned the "proven closer" label through racking up saves, a statistic that wasn't even tracked in the early history of the game.

I could go on and on with examples of sabermetric research impacting the game, but I think we can safely make the case that numbers and statistics change the way that baseball is evaluated and played. For myself, and probably the vast majority of BtBS's audience, little things like increasing strikeouts, longer games, and shorter relief outings aren't going to be enough to drive us away from baseball. In fact, the knowledge that baseball isn't the same game that it was 50, 25, or even 10 years ago keeps my interest level and drives me to learn more. Sure, I might find it harder to watch an average game with the same enjoyment as I did when I was 8 with no background in advanced metrics, but the deeper understanding creates a stronger bond with baseball than I ever had before.

For more casual fans, however, I'm not so sure that's the case. Baseball is as healthy as it's ever been, which in turn means that there's long way to fall should the interest level suddenly decrease. If game times continue to increase, scoring continues to drop, and the amount of balls in play all but disappears, it might be hard to keep the steady growth that baseball has seen in recent years.

To prevent that, the saber-community needs to do its best to educate the masses. Not in a dismissive, preachy way, but simply in a welcoming way that allows others to find that deep bond that we all have with the game of baseball. BtBS has always prided itself on doing just that, said best by former managing editor Justin Bopp:

Baseball is an intellectually, spiritually, artistically beautiful sport. It captures the imagination of the world because it represents overcoming obstacles, beating the odds, and triumphing in individual battles versus both yourself and your opponent. And sabermetrics makes it more beautiful, captivating, and compelling.

In the early days of sabermetrics, I'm sure that it felt like a fight to get any point across. The problem is that too many people still approach communication like there's some kind of argument going on, and in turn alienating people from using objective analysis and forward thinking. The common joke about sabermaticians is that they all hid out in their parents basement with their spreadsheets and computers. Sadly, maybe all that time alone has stripped the community of social skills, but they quickly need to get them back to ensure that baseball can continue growing even as it evolves. The biggest discovery has ever made is that baseball is the best game in the world. We really shouldn't keep that to ourselves.

Thanks to Bryan Grosnick, Stuart Wallace, and everyone at Beyond the Box Score.

Andrew Ball used to be a writer for Beyond the Box Score and Fake Teams.