Clayton Kershaw: Highest paid pitcher and perhaps the greatest of all time

Clayton Kershaw is now the highest paid pitcher in baseball history. Could he also become the greatest pitcher of all-time?

Share All sharing options for: Clayton Kershaw: Highest paid pitcher and perhaps the greatest of all time

The Los Angeles Dodgers signed superstar pitcher Clayton Kershaw to a record seven-year, $215 million contract extension on Wednesday. In doing so, they have locked up the best pitcher in baseball for the prime years of his career, between the age of 26-32 (although he can opt out after five years). If Kershaw continues his current dominance, they may have secured the best pitcher in baseball history.

Ben Lindbergh made the point on Clubhouse Confidential, just before the news of the Kershaw extension broke, that historically Clayton Kershaw may be one of the best pitchers in the live ball era. Using ERA+, which is ERA adjusted to league average, Kershaw has the third highest ERA+ among pitchers with at least 1000 innings pitched through the age of 25. To take Ben's point a bit further, I used his same criteria, to find the list of top ten pitchers in terms of ERA+ through the age of 25, and then examined how they performed between the ages of 26-32 - the same years that cover Kershaw's contract extension. 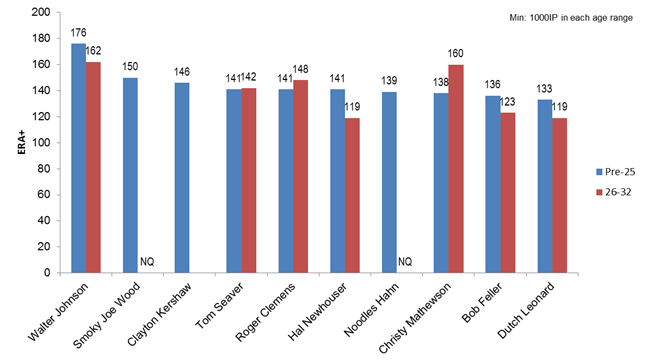 As the graph illustrates, besides Smoky Joe Wood and Noodles Hahn, who both pitched sparingly past the age of 25, each of the top ranked pitchers in terms of ERA+ before the age of 26, continued a dominant pattern between the ages of 26-32. If we include Roger Clemens as a Hall of Famer (a debate for another article), six of the nine pitchers in Kershaw's company are Hall of Fame pitchers.

In terms of modern day comparisons, Clayton Kershaw joins a group of star pitchers signed to big dollar extensions by their home clubs. This is a recent theme by smart general managers in baseball, who lock up young stars rather than risk losing them in the open market by offering extensions which overlap arbitration seasons, but also buy free agent years, without having to commit to longer-term deals when the pitchers are at advanced ages. The table below shows the top six pitchers in terms of average annual value signed beyond 2017. Kershaw has pitched the fewest number of innings pre-extension, which affects his fWAR total a bit, but in terms of strikeouts, HR/9, and FIP-, he has outpitched his counterparts. And like Felix Hernandez, his extension covers the prime years of his career.

While dominant through the beginning of his career, the 2013 Beyond the Box Score Cy Young winner still has some work to do before being named the best pitcher in baseball history. In fact, his ERA+ of 146 through the age of 25, would not crack the top ten pitchers in terms of all-time leaders in ERA+ while pitching between the age of 26-32. Of the top ten pitchers in ERA+ before the age of 25, only two, Walter Johnson and Christy Mathewson made the top ten all-time over the prime ages seasons of their careers. That being said, different pitchers blossom at different points in their careers. Many pitchers find their groove at different starting and ending points. If no age restriction is used, Kershaw's current ERA+ of 146 would rank 5th all-time among pitchers with at least 1000 innings pitched.

There is no debate that the two-time Cy Young award winner is worth top of the market money. The question that always comes up is whether any pitcher is worth $215 million, considering the risk for injury, and past history of $100 million contracts gone terribly wrong. The key difference in the Kershaw case is his age. Johan Santana and Barry Zito famously signed big contracts for bust, but both were three years older than Kershaw is today when they signed. Of course, Dodgers fans don't need to be reminded about Kevin Brown's contract. The first $100 million contract of its kind, Brown was turning 34 the year he signed. The Dodgers are giving Kershaw an extension during the prime of his career, with the young pitcher poised to become an all-time great.

For Kershaw to become the greatest pitcher of all-time, he has some work to do. We are not anointing him the greatest right now. But it is the promise that he has cemented due to his unbelievable early career success. It is fair to consider that other pitchers have had a better ERA+ during the age period that Kershaw now enters. It is also fair to realize that he has already put his name next to all-time greats, with his career just beginning.

The Dodgers made the right decision in securing their prized left-handed starter to a seven-year contract extension. At the age of 25, they have a young arm who is already making lists with the best starters in baseball history. If he continues his maturation, he could one day be the greatest of all-time.